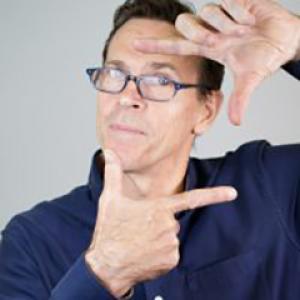 In what likely was a moment of weakness, Eric Jewett picked up a Director’s Guild of America magazine and saw the University of Colorado Denver ad seeking a professor of film, and decided to answer the call.

He had spent some 35 years in Hollywood, working on film and television production, but he was “cranky and tired.” It was not uncommon for him to work 80 hours a week. And even though his jobs were exciting and he collaborated with other smart, fascinating, interesting and creative people, he applied for the CU job.

“I was in a weakened condition. I applied and got accepted and then said, ‘Oh-oh, what now?’ There was a lot of soul-searching, because I love working on TV production, but on the other hand this was an exciting change,” said Jewett, who joined the College of Arts and Media this fall as an associate professor of television, film and video production.

His decision was swayed slightly by the fact that he had spent time in Colorado several times a year, visiting his son who attended CU Boulder, and enjoying some of his favorite pastimes – skiing and snowboarding.

“Every time we were here, I would say to my wife, ‘I love Colorado. We should move here.’ And every time she would say to me, ‘Yeah, right. What are you going to do here?’”

What he will do here is share his expansive knowledge of filmmaking and television production.

“It will be exciting to pass this knowledge on to a new crop of filmmakers. And even though I have always had young people coming to me to ask for jobs, and have always nurtured and mentored them in Hollywood, it wasn’t a structured learning experience. The idea of coming to CU and developing a program by which I could transmit my knowledge was really thrilling for me,” he said.

Jewett became interested in film production while attending Harvard, where he was studying painting and sculpture.

“The girl I was dating at the time said, ‘Do you want to take a film class with me?’ I figured a semester in the dark with her sounded like fun. I took the film class and it opened my eyes completely,” he said. “I grew up in a very small down in Massachusetts, with no movie theater for miles and miles. We didn’t have a television growing up, and so I knew nothing about film entertainment.”

Because of the class, instead of “agonizing by myself in a studio over what I was going to paint,” he suddenly was involved with a group of cool kids who were excited about what could be done with a camera and sound recording and film. “I was hooked.”

1. What was a day in the life of you like on the set? What were some of your favorite projects? 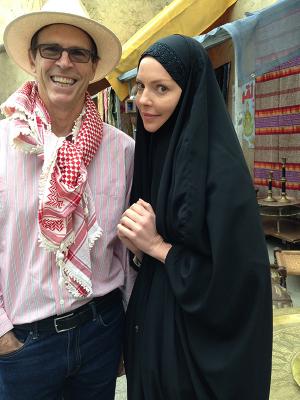 Eric Jewett with actor Katherine Heigl on the set of “State of Affairs.” Heigl’s character, a CIA officer, wore a headscarf to disguise herself on a Yemeni street.

I would have anywhere from two to eight jobs a year and the great thing is that every day was different. On some days, I would wake up and be unemployed and would get on the phone and try to find a job. Other days, I had a job and would be reading a script and breaking it down and figuring out all the production details. I would have meetings with the director of photography, the director, the producer, with the costume people, and all the crew people that make up the filmmaking team. I was in charge of organizing the whole group, telling them what we are going to do when and how we are going to do it. It was all about management.

The preparation takes equally the same amount of time as shooting. When we moved to shooting, I had a minimum of 80 people and a maximum of 1,000 people involved, and I would be shouting and moving and telling them what to do. I kept the whole machine going forward and was in charge of getting it all done as quickly as possible and as creatively as possibly. The writer and director would tell me what they wanted, and I would tell them how we are going to do it.

One project early in my career was really fun and exciting, and that was “Return of the Jedi.” I was a fan of “Star Wars” and when I got the opportunity to work on “Return of the Jedi,” I leapt at the chance. It was big, it was different from what I’d worked on before, it was on location in incredible places and it was a great movie. And it was a project to be proud of.

Another favorite was a film that no one saw, “Face to Face.” It starred Elizabeth Montgomery of “Bewitched” fame, who was a dream – one of the most wonderful people I’ve ever met. We were in Kenya, Africa, way out in the bush 23 kilometers from the nearest telephone. Cell phones didn’t exist then. It was an adventure. We were camping out and had guards with guns protecting us from wild animals that would walk through our campsite at night. I got to know a family of Maasai who lived near our set. That was an adventure in every sense of the word. I was very grateful that my job took me there.

I also worked on a television show, “Weeds,” for Showtime. That show went on for eight years. I had a chance to know and work with Mary-Louise Parker, who is an amazing actress. I learned so much about working with actors from her. And she and Jenji Kohan, the woman who created this show, gave me the opportunity to direct a lot of episodes. That was a lovely opportunity for me and an amazing learning experience.

2. Are movies in theaters in danger of being replaced by other options, such as streaming videos? And because there are so many options, does film and television entertainment have the same cultural impact that it did in years past?

There is something wonderful about the experience of going to a theater with a crowd of people, seeing a film on a big giant screen with lush soundtracks. If it is a comedy, you are all laughing; if it is a drama, you are all crying. The fact that you are moved by something and sharing that experience with a group of people is a unique and interesting experience.

Is the theater experience too expensive for a lot of people? Absolutely. But I think that people still want to do it. Every few years, there’s a bad box office summer and people begin talking about the end of the film business, but then the industry produces a couple of great movies and people get excited again.

There will always be television and video on demand – the sort of stuff you watch at home. When I watch, for example, “Game of Thrones,” I watch it in my home. My wife doesn’t like it, so I watch it alone. The show is so exciting for me that I want to share it with someone and when it is over, I call someone or we talk about it over the water cooler. But it is not the same as being in the room at the same time and watching.

And there is still a cultural impact. It’s more split up, but this is the golden age of television. There’s never been this much good television available. I could watch TV 12 hours a day and not see it all. Another great thing about what is happening now is that we do have on-demand availability so that if I tell you that you have to watch “Game of Thrones,” you can find it at any time, in a variety of options, and watch it. In the olden days, if you missed “M*A*S*H” on the night it was on, you could just forget about it. Then, 26 million people watched “M*A*S*H.” Now it might be half that, but how many people have watched it the next day or the next week or the next month? Those totals, I think, are under-counted.

3. When you watch these shows, do you look at them with a critical eye, or can you step back and enjoy them?

In the perfect world, I just sit back and enjoy the show. If it is a well-made show and a compelling story, then that is what happens. I sit there and say, “Wow, this is great.” There’s a ring through my nose and they are towing me right along, start to finish. But if the show drags, and if I’m not moved by what the scenes are trying to do, then I critique the show. I say, “They could have done this; they should have done that. They should have fired that person or this person will never work in Hollywood again!” My thinking like that is a sign that the show is not good; but me wiping tears from my eyes or clutching my stomach with laughter means the show is good.

4. What are your education goals as a faculty member at CU?

I have big goals and big plans, and I have small goals. Each day I teach a class and each day I hope that I’ve reached the students and engaged them both in their hearts and minds. That’s my small goal for each day.

My bigger goal is to help CU become a film school of note. I want this program to succeed. I want more people to come here. I want the program to develop and get bigger and have more in-depth programs. There are some terrific teachers here and some really terrific classes available, but there is so much more that can be done, so many opportunities. I would love to see this program turn into a filmmaking powerhouse and I think that is possible.

I also have to say that I’m very excited that my students are so open and enthusiastic and willing to take in new ideas. At the same time, in my senior thesis class, every day those students show up with really interesting and creative ideas for films and scenes and things they want to do. They aren’t rehashing old things but are coming up with new stuff and I admire that.

5. You must have hundreds of memories and pieces of memorabilia from your time in Hollywood. Is there a favorite reminder that you keep in your office? 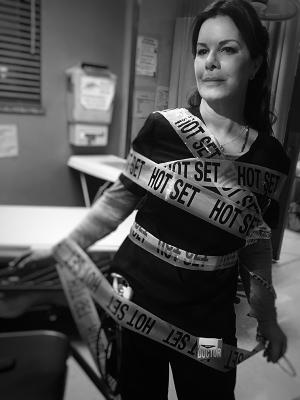 Marcia Gay Harden posed for Eric Jewett on the set of “Code Black.”

I have a lot of photographs that either I have taken or people have taken of me. And I currently have a photo of Marcia Gay Hardin that I took on the set of the TV show “Code Black” where we worked together. It was a hospital setting, but also involved police, who had crime-scene tape. The prop guys and the set dressers use what looks like crime scene tape but says, Hot Set, which means that the set is in the middle of being filmed and should not be touched. The set dressers would have a tendency to come in and clean up the fake blood off the floor, for instance, but when we start filming again, that fake blood is supposed to match. So the tape would keep them off the set. Marcia took the tape and wrapped it all around herself and posed for me.