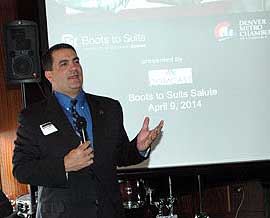 Izzy Abbass, program coordinator for Boots to Suits, addresses the gathering at the Boots to Suits Salute on April 9 at Sullivan's Steak House in downtown Denver.

Aaron Torres is one of the many success stories produced by Boots to Suits, the innovative CU Denver program that helps veterans transition into civilian careers.

Torres joined about 100 other military veterans, employers and community members as Boots to Suits celebrated its second anniversary at Sullivan's Steak House in downtown Denver on April 9.

"Izzy Abbass (Boots to Suits program coordinator, Office of Veteran Student Services), CU Denver and my mentor helped me get to where I am," said Torres, wearing a suit and a name tag identifying him as the military-veteran constituent advocate for U.S. Sen. Michael Bennet. Torres graduated last May with a bachelor's degree in criminal justice from the CU Denver School of Public Affairs.

Through Boots to Suits, he spent spring 2013 being mentored by Corina Almeida, chief counsel of the Denver office of U.S. Immigration and Customs Enforcement. "She was a really great mentor," said Torres, who served in the U.S Navy from 2002-2010. "She sat me down and talked about career paths and options."

In August, he was hired by Sen. Bennet's office. Similar success stories of veterans making the transition from the military to college and then to the workplace filled the room.

Almost 200 veterans have gone through the program

Abbass said 177 student veterans—men and women—have gone through Boots to Suits at CU Denver. "Of those, 94 percent have found a job within 90 days of graduation. For those who haven't graduated yet, we have a 95 percent retention rate," he said. "So we're doing something right, and a lot of that is due to the support we have in the community. Our business community, our government leaders, federal organizations—all of them are taking part in mentoring our student veterans."

The second anniversary event, called the Boots to Suits Salute, was sponsored by Comcast, which is part of the U.S. Chamber of Commerce Foundation's "Hiring Our Heroes" program. Since January 2012, Comcast has hired more than 2,000 veterans. CU Denver has collaborated with the Denver Metro Chamber of Commerce to partner student veterans with community mentors to provide guidance to students interested in various fields.

Matt Depuy, a 20-year U.S. Army veteran, last spring was paired with Nita Mosby Henry, executive director of Human Resources with the city and county of Denver. Depuy graduated from CU Denver in spring 2013 with a degree in criminal justice.

"I realized that criminal justice wasn't the way I wanted to go, so I went and talked to Izzy about getting into human resources," Depuy said. "He then placed me with Nita."

When a talent and acquisition recruitment job opened with the city and county of Denver, Depuy applied and got the job. "I like it," he said. "I've been there a year now."

Chuck Ward, vice president of public affairs for the Denver Metro Chamber of Commerce, joined Jeff Hamstad, Comcast vice president of human resources, Mile High Region, and Abbass as speakers at the event. Ward noted that many veterans have taken advantage of the post-9/11 GI bill, which has helped them further their education and enter the 21st century workforce. "We're proud to be able to play some role in helping connect students with the workplace—basically helping your guys get out of boots and into suits," Ward said.

The keynote speaker was Lida Citroen, author of "Your Next Mission: A Personal Branding Guide for the Military to Civilian Transition." Citroen helps veterans transition into civilian jobs, putting a strong focus on their ability to create a personal brand. She noted that veterans make exceptional employees because of their training in the high-stress, fast-paced, global environment.

She encouraged veterans to "get in front of your reputation and make yourself findable online." Mostly, she emphasized that they stay true to themselves. "There's a reason you raised your hand and said I will serve this country in the most noble way possible," Citroen said. "Tap back into that, tap back into that passion and commitment to make yourself marketable on the other side."

Send your thoughts and suggestions for the Newsletter.
END_OF_DOCUMENT_TOKEN_TO_BE_REPLACED