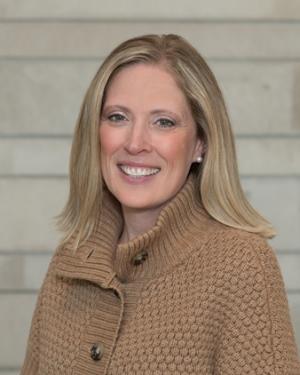 Growing up in Colorado made a huge impact on Deserai Crow, both personally and professionally.

“My family had always been very outdoorsy and had shared a lot about environmental issues,” she said. “I think that outdoor experience and gaining an appreciation of the environment influenced me. It’s as simple as that.”

Born in Boulder and reared in Longmont, she earned her undergraduate degree in journalism at CU Boulder, a master’s degree in public affairs from CU Denver, and a Ph.D. from Duke University. She has spent the past decade on either the Boulder or Denver campus and currently is an associate professor in the School of Public Affairs at CU Denver. 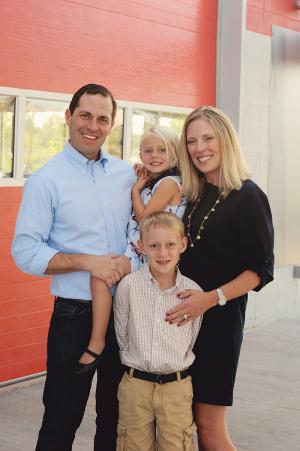 Deserai Crow with husband Jason and children Anderson and Josephine.

She researches state and local environmental policy, including stakeholder participation and influence, information sources used, and policy outcomes. Much of her work focuses on natural disaster recovery and risk.

“Disasters, Hazards and Emergency Management will be launched in August to appeal to students who are more interested in natural hazards and disasters and questions about resilience,” she said. 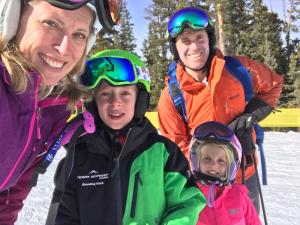 The Crow family at play in the mountains.

Crow is on sabbatical for the next year, giving her the “luxury of having the space and time to think through new projects and ideas, including a couple of book projects, and recharge my batteries from 10 years of hard work,” she said. She’ll also spend time with her family during a lot of outdoor activities like hiking, camping and skiing.

1. Being a Colorado native influenced your career path, but why did you go from broadcast journalism to public policy issues?

After working in media, I felt unfulfilled in terms of pursuing my own passions of making a difference in an area that I’m personally devoted to, which is environmental issues. I decided to pursue a master’s and assumed that I would work for an environmental non-governmental organization or a government agency, but while working on my master’s, I discovered I loved doing research. I had a mentor on the faculty who really gave me the feedback that I think students really crave. I was a strong student, but I didn’t feel like I excelled in any particular way. A professor told me I should pursue a Ph.D. and that I was very good at research. He offered to help me and that was such a boost of confidence.

I do not miss journalism and am quite literally grateful every single day for my job. I love it and the university and the ability and flexibility to think about interesting questions and research topics that I like. I love the excitement I get when it comes to teaching our students. I can’t say there is anything else I would want to do.

2. You wrote “Teaching Millennials to Engage THE Environment Instead of THEIR Environment: A Pedagogical Analysis,” but aren’t most millennials more attuned to environmental issues than their elders?

Surveys show that millennials, as a generation, care a lot more about the environment and that it is a bipartisan issue for them. Surveys also show that young, conservative evangelicals don’t see climate change as a hot-button political issue to the extent that members of older generations do. I think the main thing is that millennials are growing up in an era where all of society is more insulated. We’ve all kind of retreated to our bubbles, either politically or socially or in terms of where we live and who we associate with.

There may be very valid reasons why someone could agree that environmental problems are important and should be solved, and yet they will make choices to not do that in their own lives or not prioritize it above other things. They might care about the environment but care about other things more or have more pressing stresses to cope with in their own lives. Acknowledging these values or priorities held by other people is something that some students struggle with, as do a lot of people because we have become so insular.

It’s important to force people out of their natural comfort zones so they think about different perspectives or about competing values held by other people that they may not personally hold.

3. What are some research topics or projects that you have addressed recently?

There are three projects that have dominated my time and attention for the past several years.

The first one looks at a number of different environmental issues in five different states to compare and contrast the influences on environmental rule-making. Most of our work on the regulatory process for rule-making has focused on the federal level and that’s in part because getting that data is more straight-forward.

Getting state data is a lot like herding cats: you must prepare Freedom of Information Act requests; some states provide information online; and in California, we had to pay a firm to make photocopies of the information we needed.

We examined the major influences in producing the environmental outcomes of each state, which were selected based on geography and expected degree of state government transparency and other political characteristics. What we found was similar to a lot of federal rule-making research. Industry has a powerful role to play because they are the regulated entities in most cases, and because they are the technical experts in those regulatory areas. But there are mechanisms by which others participate. Organized environmental advocacy groups that have the resources and the capacity to participate in rule-making again and again and again can also become known to the regulatory agency and develop their own expertise in that rule-making process. The process, as much as anything, is about being a known quantity or known entity to a regulatory agency so that it reaches out to you for input and you have developed the ability to navigate the process.

The other two projects are related and deal with natural disasters. I started one with a group of graduate students on the Boulder campus that focused on policy processes and policy influences. We all were either from the western United States or have spent most of our lives here, so issues of the western U.S. are important to us. I wanted to begin this lab group project so that we all had space to learn and grow in our research.

By taking a topical area that none of us was doing research in, which was wildfires, and one we all thought was important and potentially beneficial to our future research agendas, we all learned something, and we were all somewhat on a level playing field. Over the years, I’ve worked with six or seven students in that lab group and we focused essentially on how communities make decisions to mitigate wildfire risk. The mitigation aspect of disasters is very forward-looking and long-term in nature, since most of our attention and resources from government agencies are dedicated to the aftermath of a disaster during emergency response. As part of that, our group examined how we talk about wildfires and natural hazards and disasters, which very frequently are talked about in terms of natural phenomenon or Mother Nature or similar terms that remove any human agency or culpability in creating the problem that led to it, such as building in the wildland urban interface or climate change and drought.

The final project was done with a good friend and collaborator with a National Science Foundation grant. We went to graduate school together at Duke, and she’s on the faculty there. We’ve spent the last four years studying the aftermath of the 2013 floods here in Colorado and what types of learning occurred in local governments and what types of policy changes resulted from that learning. That project is wrapping up this year.

That grant enabled us to train graduate students who contributed a great deal to the project and gave us the capacity to be able to do much more than we would have been able to do otherwise. Last fall we brought together the research participants from our case-study communities for a workshop in response to our final project report, and we gave them a presentation of our findings. We were trying to give back to them after they spent so much of their time contributing to our research, which I think sometimes doesn’t occur in research, and we thought that was important in the context of community recovery. (To view the final report and other research efforts, visit www.learningfromdisasters.org )

4. What constitutes a disaster?

Essentially, we think about a hazard as a risk that society or a community or a neighborhood or a family faces, like wildfire risk or a drought risk. It’s also something that human beings can make better or worse. A crisis happens when that hazard culminates in an event. It doesn’t become a disaster unless it harms human beings and their functioning society.

There’s a gray area between what constitutes a disaster and catastrophe, but it is a difference in magnitude. A disaster would be an interruption of community or society functions, say communications or water functions, and damage to human life and property is part of that. A catastrophe is of much higher magnitude, for instance, the Indonesian tsunami or 9/11. They disrupted the entire functioning of a community or region. We look at a disaster through the lens of humans simply because if the same event were to occur in a very remote area, we wouldn’t consider it a disaster and we often let those events take a more natural course, not suppressing fires in remote areas for example.

5. “Culture, Politics and Climate Change: How Information Shapes Our Common Future” is your 2014 book. Has anything changed your thinking since the book was published?

The book was an edited volume that arose out of a conference I organized in Boulder. There were 250 to 300 scholars from all over the world that came to discuss the different ways we think about and talk about and view climate change with a particular focus on the nexus between communication and politics or policy. Each section of the book focused on different aspects of that area, including about how the media cover climate change, how humans conceive of climate change and how we communicate – the rhetoric we use to talk about it and so forth.

I don’t know that the ideas embedded in the book are wholly different. What has changed since then is the Paris Agreement, which was agreed to, and then, of course, the United States left the agreement. Since then, we’ve seen a greater increase in the degree to which Americans understand that the climate is changing and think that we should do something about it. I don’t have an answer to why this has changed, but one of my questions is whether seeing an administration that is actively working against climate policy solutions will galvanize more support for climate action. Or, is it simply that we are seeing much hotter, extreme temperatures and extreme events globally and that has changed the level of support.