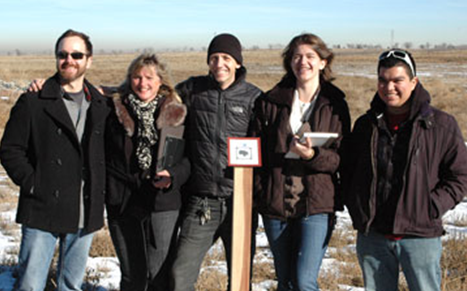 This image shows what a viewer sees when they hold their tablet up to a bald eagle marker. Information about the eagle drops down on the left side of the screen while a 3-D bald eagle moves within the landscape.[/caption] Imagine strolling along a wildlife refuge trail and finding a marker with a symbol of a bison. Pull out your smartphone or iPad and hold it up to the picture. Now look at the screen and see a 3-D bison roam across the landscape.

Through the magic of digital technology, visitors to the Rocky Mountain Arsenal National Wildlife Refuge (RMA) could click an app and enjoy sightings of rare or endangered animals - albeit virtual ones - in a pristine setting. Augmented reality, as it's known, is gaining popularity as a way to enhance natural excursions - dinosaurs popping up in a forest, for example - or to teach engine repair, surgical procedures and other technical lessons.

The U.S. Fish & Wildlife Service (USFWS) approached the class with the goal of raising the profile of its "Get Your Goose On" program, which promotes awareness of the National Wildlife Refuge System - including the Rocky Mountain Arsenal - particularly among youth. 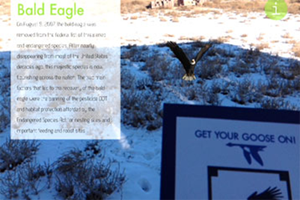 This image shows what a viewer sees when they hold their tablet up to a bald eagle marker. Information about the eagle drops down on the left side of the screen while a 3-D bald eagle moves within the landscape.

"We thought maybe we could use augmented reality to increase interest from younger people," Carpenter said. "That way people could have a phone or tablet and see animals, including endangered animals, which might appear there."

Carpenter has followed trends in augmented reality for several years. She gained more insight last May when she co-led a group of 20 students on Scandinavian by Design, a CAM study abroad course. The group visited several Danish museums and companies, including YOKE, which has created augmented reality apps for museum exhibits, the Danish Architecture Centre and a Danish furniture maker. With augmented reality, Carpenter said, "it's virtual, but yet you're interacting with it."

"It's a more interesting way to bring people to the refuge," said student David Bonilla.

Student Shawn Jenkins added, "It's a way to engage kids who are now so hooked on iPads, tablets and gadgets. It gives them a reason to take the devices outside and explore. This is actually interactive."

To see how the augmented reality app works in the field click here.

So far, the students, led by Android app spearhead Sarah Torp, have created deer and a bald eagle that appear when a device is held up to the "Get Your Goose On" logo. Rounding out the five-student augmented reality team, which also has an iOS app in the works, are Seth Chaps and Erica Warfield. There are 18 students in the class, with projects ranging from augmented reality to upgraded websites for a host of nonprofits, including one that helps impoverished people in Guatemala. "It's a very real-world experience for the students," Carpenter said.

The CU Denver students hope to find out soon if the USFWS is interested in rolling out their app at RMA. So far, refuge staff like what they've seen of the technology and how it could enhance visitors' experiences at the 22-square-mile urban refuge.

"I think it's very exciting," said Sherry James, visitor services manager at the Arsenal. "It's definitely something we would be interested in piloting to see if it works here, especially since we're an urban refuge and it fits nicely into the Urban Wildlife Refuge Initiative."

The technology could be used in various ways, Carpenter noted. "It could be used with, say, a golden eagle. The eagle could be soaring and you could take a picture with your tablet as well as view a drop-down screen that gives information about the golden eagle."

Send your thoughts and suggestions for the Newsletter.
END_OF_DOCUMENT_TOKEN_TO_BE_REPLACED