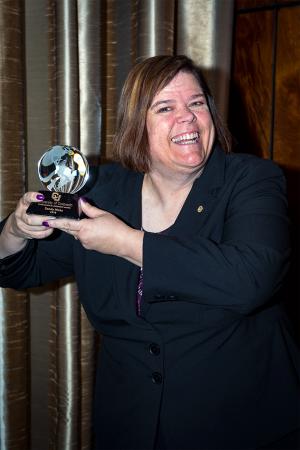 Sandy Hicks is in the driver’s seat. She has mapped out a vision, planned for bumps in the road and is moving everyone forward.

Higher education procurement professionals around the nation are happy to be along for the ride. Hicks, associate vice president and chief procurement officer at CU system, is widely recognized in her field as an innovator and thought leader. That’s just part of why Hicks was awarded the 2016 Excellence in Leadership Award last month.

“I’ll ask people what is on their road map, and they reply, ‘I don’t know. What are you doing? Because we want to follow you,’” Hicks said. “I love that the leadership above me has been very supportive of us being innovative and bringing technologies to campuses that make people’s lives easier.”

Hicks leads the CU system’s Procurement Service Center (PSC), which supports all CU campuses in purchasing, payables and managing travel. Since taking the helm in 2008, she has moved the PSC forward on three fronts – technology, outreach and staff development.

Hicks implemented two major systems, CU Marketplace and Concur (CU’s Travel and Expense system), which dramatically increased efficiency. The time to receive expense reimbursements has been reduced from an average of four weeks to 24 hours. Mobile apps, such as Concur Mobile, enable travelers and managers to more efficiently use the system by approving transactions more quickly using the app. CU Marketplace provides an easier purchasing process via user-friendly catalog shopping, automatic invoice processing and access to CU Contract Pricing. The data provided by these systems allows for deeper analysis of spending patterns.

“Both the systems are software as a service (SaaS) systems, so what’s different when you don’t own the software is you can’t customize it. You have to influence the companies to make the changes we need for a better experience,” Hicks said. “We spend a lot of time on relationships with these two companies, so they realize what our needs are. We’re not unique to higher education, so if they meet our needs, it’s valuable to their other customers, too.”

Hicks’ advocacy for higher education procurement led to her election to the National Association of Education Procurement’s board of directors in 2006, and to serve as its president from 2010-11.

NAEP Chief Executive Officer Doreen Murner credits Hicks with helping her implement the organization’s Innovators Forum. The purpose of this forum is to engage in a discussion and analysis of the major issues affecting higher education and to better inform senior administrators and procurement professionals on alternative ways to approach these complex problems and concerns. The program came with a significant financial investment, but potentially held a major return on investment for members. Hicks recognized immediately the forum’s potential value and benefits.

“Under her leadership, she persuaded the board of directors to take the leap and invest in the program,” Murner said. “To this day, six years later, the NAEP Innovators Forum is one of the leading member benefits the association produces. And Sandy is the chair of the Innovators Forum.”

Hicks was instrumental in developing the NAEP Strategic Procurement Institute, which the PSC holds jointly each August, hosting 40 to 50 participants from about 25 universities with the goal of improving procurement processes and strategies.

Hicks’ NEAP leadership made her a mentor to procurement directors around the country. Just ask Kara Finch, who left her job as the University of Notre Dame’s Travel Program Manager to become Purchasing Manager at the PSC. As she considered applying for the CU position, she asked her director for advice, concerned that the position was a lateral move.

“He had no hesitation in confirming my decision to apply, adding that if the position was one that was within any other organization, he might hesitate,” said Finch, who is now the PSC’s director of Procurement Systems. “But given the level of respect he has for Sandy’s leadership and reputation as a whole, he not only supported my decision, but further encouraged me to make the move, saying, ‘You have to apply, given that you’d have the opportunity to work for Sandy.’”

With so many procurement professionals around the country following Hicks’ path, people want to know the next stop on her journey. For now, Hicks is contemplating her next move.

“We are continually trying to improve what we do. And that involves three things: people, process and technology,” Hicks said. “So anytime you touch one of the three, it affects the other two. So I would say we are still shifting from bringing up the technology to see how people and processes are implemented. Our next big thing is looking at how we can be the best with the technology we’ve put in place.”