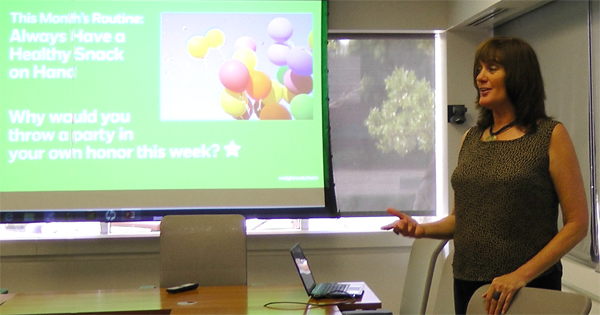 There’s no judgment at CU’s Weight Watchers at Work meetings. Take, for instance, a recent Wednesday morning gathering at CU’s system administration building, where a woman walked in and admitted to having just eaten a doughnut before hopping on the scale to weigh herself.

Shortly after that, meeting leader Debbie Case weighed another CU Weight Watchers participant before telling her to enjoy the Chinese food she was about to eat instead of attending the upcoming meeting.

“Remember: Nothing shiny is good for you,” Case warned, half-jokingly, as the woman left for lunch.

Eating habits are difficult to change, and Case understands this all too well. Before leading Weight Watchers at Work meetings at places such as CU, she walked in these participants’ shoes: She spent the first three months of her meeting attendance sitting silently in the back of the room. She listened to the stories of struggle and triumph that fellow participants shared until she, too, gained confidence to speak. Most importantly, she said, she kept coming.

“I encourage people to come in here even if they don’t want to weigh in, because it makes a huge difference,” Case said. So while each meeting opens with a half-hour weigh-in session — a private moment between leader and participant to track weight fluctuations — participants are welcome to attend only the meeting portion.

As of June 2014, CU employees who participated in the program had collectively lost more than 3,300 pounds since its November 2013 launch on each campus and in the System building. As summer vacations, heavy workloads and warm, daytime walks compete for people’s time, Case said the support provided at meetings is crucial to helping participants carry one another through to healthy nutrition and fitness choices.

At CU, Weight Watchers at Work Meetings also offer employees a lighthearted, open forum for dishing about everything from tips for preparing weekly meals to healthy alternatives to greasy favorites. At a recent meeting, the topic of choice was reflection. Wouldn’t it be helpful, Case suggested to the group, if you spent just five minutes a day to reflect on your eating choices rather than doing so at the end of the week? This led to a brainstorming session: One woman said this practice would help her drink the right amount of water each day; another said advanced planning would be more helpful for her upcoming trip to Las Vegas.

“You don’t want to eat at the trough,” warned another participant, referring to Vegas’ bountiful buffets. When the Vegas-bound woman floated the idea of eating salads from the buffet, others cautioned her that $39.99 is a hefty price to pay for salad. It’s good advice, she said.

The conversation moved to food preparation. The group discussed healthy daytime snacks (a debate about the health benefits of dehydrated fruit) and the benefits of simple refrigerator makeovers, such as placing healthy foods at eye level.

As the meeting wrapped, a participant turned to her colleagues and asked them to help her: She has made a promise to herself to start swimming, and she wants them to hold her to that commitment. Of course, the group said, we’re all in this together.

What you need to know about the new parental leave policy