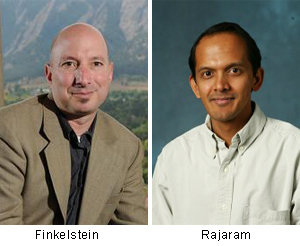 Two University of Colorado professors who have skillfully integrated teaching and research at a high level throughout their careers at CU-Boulder have been designated as 2012 President’s Teaching Scholars.

The title of CU President’s Teaching Scholar signifies the university system’s highest recognition of excellence in and commitment to learning and teaching, as well as active, substantial contributions to scholarly work. Each year, CU President Bruce D. Benson solicits nominations of faculty for the designation, which is a lifetime appointment.

The newly named scholars are:

“Professor Finkelstein is an award-winning classroom teacher and graduate mentor, a transformative scholar in science teaching and learning, and a tireless campus and national servant promoting research-based best practices in STEM education,” wrote Paul D. Beale, professor and chair of the physics department, in the nominating letter.

“It speaks volumes that one of the highest level awards in the University of Colorado system focuses on education and scholarship in teaching,” Finkelstein said. “It honors our roots, state charter, and commitment to serving the state and the nation through fundamental investment in education.

“I am deeply indebted to the wonderful community that is so committed to education – to my research group in physics education, to the physics department, and to the campus and university as a whole for being such a supportive and engaged culture. Particularly, I thank the many students who have enriched – and will continue to enrich – my life and all of our efforts at Colorado.”

Finkelstein, a winner of CU’s Diversity and Excellence Award, leads an annual delegation of students at the National Association of Black and Hispanic Physicists conference. He earned his bachelor’s degree in mathematics from Yale University; his doctorate in applied physics from Princeton University.

Rajaram has published more than 50 peer-reviewed journal publications, and his research has been cited nearly 1,000 times, according to the Web of Science.

In a letter supporting Rajaram’s nomination, Keith R. Molenaar, chair of the Department of Civil, Environmental and Architectural Engineering, wrote: “He is simply our best teacher, and his model of excellence has inspired faculty throughout the department.”

Rajaram’s previous awards include the NSF CAREER award for integrating research and education in 1998 and the Charles Hutchinson Memorial College of Engineering Teaching Award from CU in 1999.

Rajaram said he’s dedicating his newest honor to his mother, an elementary and middle school mathematics teacher, and his father, a chemistry professor; both retired in the early 1990s after 30-year teaching careers.

“I am deeply honored and humbled by this recognition of 18 years of effort toward improving the clarity and effectiveness of my teaching,” Rajaram said. “I also am grateful for the feedback, appreciation and constructive criticism I have received from students and colleagues at CU over these years, which have helped me grow in many ways, both as a teacher and as a person.

“I hope that as a President's Teaching Scholar, I will be in a position to give something back to CU in return for these wonderful years. I hope to help mentor younger faculty members in the early stages of their careers, to help them discover their teaching personas and develop effective and efficient approaches to preparing their courses and lectures.”

Rajaram earned a bachelor’s degree in technology from the Indian Institute of Technology in Madras, India, and a master’s degree in science, civil and environmental research from the University of Iowa. He completed his doctorate in civil engineering at MIT.