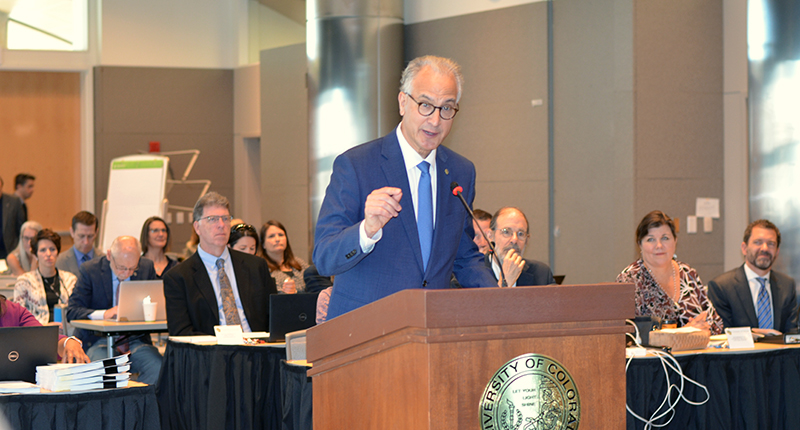 Members of the Board of Regents have taken their first extensive look at President Mark Kennedy’s strategic planning process, gathering in groups with university leadership to continue discussions that are informing the effort. 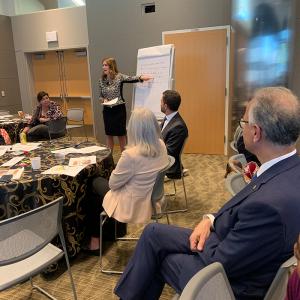 The roundtable conversations were part of the board’s meeting Friday at the CU Anschutz Medical Campus, where Kennedy led an introduction to the proposed undertaking that aims to culminate in a completed systemwide strategic plan next summer.

“If we have all elements of our system governance working together … we will accomplish so much more,” Kennedy said.

The strategic plan will create a roadmap that focuses the university’s strategic priorities over the next five years and beyond. It will not replicate or replace campus-level strategic plans.

The current framework consists of three strategic pillars: Affordably Educate, Discovery and Impact, and Fiscal Strength. Those three themes are tied to nine focus areas. Academics are emphasized, as Kennedy has pointed to the world’s digital evolution.

“Digital natives will increasingly resist taking classes at the same time, at the same place, and learning at the same pace,” Kennedy said. “Those universities that do not adjust to this coming reality will be ‘once upon a time.’”

Kennedy in recent weeks has been sharing a similar presentation with governance groups, including the Faculty Council. Pre-planning, listening and preparation for the effort have been underway since early July, when Kennedy assumed his position as CU president.

The planning process has several objectives that emerged from the Board of Regents summer retreat: to address the challenges of the future; to be collaborative, with input from across the university community; to be data-driven; and to be actionable and implementable.

A strategic plan for the CU system is needed to align regents, system administration and the campuses, Kennedy said. At Friday’s meeting, he was joined in his presentation by the two co-chairs of the strategic planning process: Sharon Matusik, dean of the Leeds School of Business at CU Boulder, and Todd Saliman, system vice president for finance and chief financial officer.

The process will move into its second phase early next month, when the strategic planning committee will meet for the first time to begin work on each of the focus areas. The Board of Regents will provide feedback and potentially approve these plans in November. Final approval of the full strategic plan is proposed for the board’s July 2020 retreat, with implementation beginning that fall.

In other business at last week’s Board of Regents meeting, which ran Sept. 12-13 at CU Anschutz:

Tagged with:
Board of Regents, Mark Kennedy, Strategic Planning