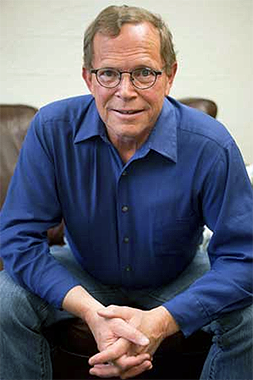 The director of CU-Boulder’s journalism program has won a prestigious national award for challenging the “presumed centrality” of René Descartes’ groundbreaking theory of mind in 17th century French culture.

So why is the head of an evolving journalism program producing iconoclastic scholarship on a seminal figure of the age of rationalism and the Scientific Revolution?

Christopher Braider is both professor of French and comparative literature and also director of Journalism and Mass Communication at the University of Colorado Boulder. He suggests that both disciplines are ripe for a “paradigm shift.”

Braider was recognized for his book “The Matter of Mind: Reason and Experience in the Age of Descartes,” published by the University of Toronto Press.

The prize is awarded annually for an outstanding scholarly work in its field written by a member of the association.

“Christopher Braider’s study displays an admirable grasp of the complexity of canonical texts and their ability to continuously offer up interpretative possibilities that withstand attempts at definitive appropriations by even the strongest theoretical frameworks,” the committee continued.

Braider describes his work as a close examination of an issue with which scholars grapple. “Students of 17th-century European literature, philosophy and art have long understood that Descartes’ dualist doctrine of self, and the theory of knowledge and mind that underwrites it, raised as many problems as it solved.”

Descartes is famous for stating “cogito ergo sum” — “I think; therefore I am” — a proposition said to be fundamental to Western philosophy. His “Cartesianism” viewed mind and body as separate and emphasized reason as the basis of the natural sciences.

By sharply distinguishing body and mind and making that distinction the foundation for thinking about the nature of reality, “Descartes fostered the mental autonomy and detachment needed to subject the otherwise overwhelming sprawl of empirical experience to rational analysis.”

But that absolute distinction can’t be maintained, Braider contends. Mental phenomena are “inextricably engaged in the body that houses them and in the world to which the body itself belongs.” Further, though Descartes’ present-day historical and deconstructionist critics assume that Descartes’ rationalism permeated 17th-century art, literature and thought, most of Descartes’ contemporaries were as aware of its weaknesses as later commentators are.

“This leads me to be the first to argue in a systematic way that our whole picture of 17th-century culture is wrong,” Braider said. “Though there were indeed ‘Cartesians’ in the period, they were far less representative than we suppose.”

Viewing the culture in that light “invites us to return to, say, the comedies of Molière, the paintings of Poussin or the theological speculations of Pascal in an entirely new light, discovering rich alternatives we habitually overlook.”

“To the extent that the 17th century was far more productively anti-metaphysical than we realize, we cast the spell we congratulate ourselves for breaking,” Braider continued. “The time has come to move on in a more responsible (and less judgmental) way—and the Scaglione Prize committee seems to agree!”

Braider earned his bachelor’s and doctorate from Trinity College, Dublin, receiving the doctorate in French in 1982. Following 10 years on the faculty at Harvard University, he moved to CU-Boulder in 1992.

Braider has led CU-Boulder Journalism and Mass Communication since 2011. During his tenure, the program has implemented a “Journalism Plus” curriculum that requires journalism majors to take the equivalent of a double major in a second field, thus increasing their breadth of knowledge and experience.

The new college would include seven academic departments focused on the principles and practice of using digital technology in all realms of mass and interpersonal communication.

Braider leaves it to his colleagues to say whether his academic background has helped him as a journalism-program administrator. “But if it has, I think it’s because it has taught me to balance faithful attention to particulars with the ability to see the whole.”

The Modern Language Association of America has nearly 30,000 members in 100 countries and works to strengthen the study and teaching of languages and literature.

The Aldo and Jeanne Scaglione Prize for French and Francophone Literary Studies, awarded under the auspices of the MLA’s Committee on Honors and Awards, was presented for the first time in 1992.

The Scaglione Prize is one of 16 awards that will be presented on Jan. 11 during the association’s annual convention in Chicago.