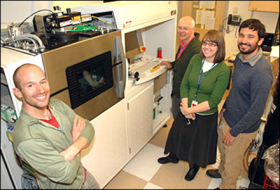 Three-dimensional printing technology that President Obama touted in his recent State of the Union speech is already being used in a University of Colorado Denver | Anschutz Medical Campus laboratory.

Now, thanks to a $600,000 capital equipment grant from the Veterans Administration, the CU Denver | Anschutz Medical Campus/VA Biomechatronics Development Laboratory is home to an even more cutting-edge 3-D printer: a laser metal sintering machine.

Richard Weir, Ph.D., a leading researcher in robotic technology for arm amputees, said the fabricator will allow his research team to develop better components -- created faster and less costly -- for prosthetic fingers, hands and arms. Weir, an associate research professor in the Department of Bioengineering, College of Engineering and Applied Science, also envisions creating a prototyping center as a resource for other university and VA researchers.

"It's a whole new way of thinking about how to make things," Weir said. "... The revolutionary aspect is to be able to do stuff that you can't using conventional technology. There is the possibility to fabricate impossible-to-machine components and to explore whether that confers advantage to the designs we're working on."

While 3-D plastic printers have been available for many years, metal printing is still "a very nascent technology," Weir said. He estimates that only a couple dozen of the devices -- called direct metal laser-sintering machines and built by German-based EOS e-Manufacturing Solutions -- are being used in the United States, mostly for biomedical and aeronautical applications.

Weir first saw a 3-D metal rapid prototype machine being used to create cranial implants -- custom titanium plates in the shape of the human skull -- at a laboratory at North Carolina State University. "When I saw that I said, 'I want one of those.'"

He got his wish in 2011 when the VA, well aware of Weir's pioneering research that could benefit veteran amputees, funded, through a Capital Equipment Grant, the purchase of one of these machines. His lab had already been using a 3-D plastic printer, but a metal prototyping machine dramatically expands the horizons for their prosthetic designs.

"That's what we have a need for when we're building our small hands," said Weir, whose Implantable MyoElectric Sensors work will be tested in clinical trials this spring. "We have all of these tiny parts that need to be very strong, and a lot of times steel turns out to be the best material to work in. If we want, we can change the machine's set-up, for a fee of course, that will allow us to print in a different metal. We can print in titanium, nickel, magnesium, cobalt."

Weir and his team, which includes graduate students from the CU Denver | Anschutz Medical Campus College of Engineering and Applied Science (Matthew Davidson and Nili Krausz, bioengineering and mechanical engineering departments) and University of Colorado-Boulder (Jacob Segil, mechanical engineering), saw the EOSINT M270 arrive from Germany in late 2011. Weir received a $250,000 discount on the reconditioned machine because it had been used in an EOS facility.

But they had to wait a year to pull it out of storage while space was prepared for it in the Research Institute where Weir's lab is located, in the basement of Children's Hospital Colorado.

The machine uses a three-dimensional digital image to methodically laser-sinter beads of metal powder into solid metal. Most components will be built overnight in the machine, which has a door -- much like a microwave oven -- that allows manufacturers, or in this case researchers, to view the progress of each iterative design.

Segil said the machine creates a "whole new modality" to turn ideas into reality, especially in the tricky area of anthropomorphic design. "For things that don't have hard edges, like our bodies, it makes a world of difference," he said. "To (create) something like our finger, which has curvature and intricacies, out of metal is a horribly difficult and expensive thing to do using conventional machining processes. Now we have a machine to do it."

Weir said he'd like to make the metal prototype machine accessible to other researchers, as has been done with the plastic 3-D printer. "We have a lot of rapid-prototyping capability within three or four rooms here. Our hope is to start a sort of prototyping center."

Meanwhile, the president hailed 3-D printing technology in his recent State of the Union speech, saying it "has the potential to revolutionize the way we make almost everything." Obama said an innovative manufacturing institute has already launched in Youngstown, Ohio, and he's pushing for as many as 18 such facilities around the nation.

Weir said it will be a process to learn all of the new machine's capabilities. "We will print a part, but it won't necessarily be a finished part," he said. "There's a post-finish process we have to do to clean up a part before it's usable. How much of that we need to do we need to discover."

He pointed out that the university's newly formed Bioengineering Department will begin an undergraduate program this fall. The program will include a design track that will train students to be able to take advantage of such cutting-edge rapid-prototyping equipment.

Send your thoughts and suggestions for the Newsletter.
END_OF_DOCUMENT_TOKEN_TO_BE_REPLACED