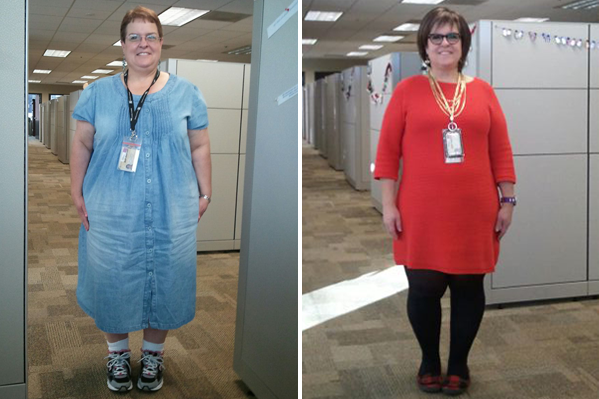 Tamara Crandall in March 2012, left, and December 2012, after making significant changes to diet and exercise.

Since losing about a third of her body weight, Tamara Crandall has become somewhat of an authority on the best stair-stepping spots in downtown Denver.

She can tell you, for instance, that you’ll climb two flights of stairs after disembarking from a bus at Market Street Station. For Crandall’s money, the best stairwells live inside the Wells Fargo Center, not far from CU system offices at 1800 Grant St., where she’s a professional benefits counselor with Employee Services.

Getting to this point — climbing an average of 15 to 25 flights of stairs each day and controlling her diet — was arduous. Crandall’s journey started almost two years ago, when she decided to take advantage of an October 2011 health assessment screening covered by Be Colorado, the wellness component of her health plan.

The results, though not shocking to Crandall, delivered a swift dose of reality.

That last factor — the threat of a diabetes diagnosis — terrified Crandall. She scheduled doctor’s appointments and, after months of medical consultations and presentations, made the life-changing decision to undergo bariatric surgery.

“I think it’s a big misconception, truly, about bariatric surgery: ‘This person’s taking the easy way out.’ It really wasn’t the easy way out,” she says. “(I) really messed with (my) anatomy.”

Crandall says the surgery essentially condensed her once-accommodating stomach to a 1-ounce pouch. For a woman who had an unabashed love of eating, reducing food portions was extremely challenging.

“It’s a head game,” says Crandall, who was more enthusiastic about the fitness component of her new lifestyle than the dietary one. “At first, I was very unhappy, I have to say … for the first month or so.”

Crandall re-learned how to eat. The surgery limited her to eating about 1 ounce of food at a time. She started slowly, with protein shakes in the morning, small snacks throughout her day and light lunches and dinners.

Over time, her stomach has expanded to accommodate about 4 ounces to 6 ounces of food at each mealtime. She meets her nutritional needs within these limitations by eating multiple small portions throughout the day.

Lean meats, dairy, nuts and soy make up about 75 percent of her daily diet, while carbohydrates, vegetables and whole grains round out the rest. Because Crandall’s body does not properly digest or sufficiently absorb such nutrients as B12 and calcium since the surgery, she takes supplements to ensure she’s fulfilling her needs.

“I really eat many things I did in the past but in very limited portions, and I can have a higher quality meat like a filet, for example, because I am splitting it with my spouse and eating only about 3 to 4 ounces at a meal,” Crandall says. “So to me, it is quality and less quantity for the rest of my life.”

While changing her diet, she also discovered how increased movement was making her feel better — physically and mentally. Just three months after her surgery, as a Mother’s Day gift to herself, Crandall bought a Fitbit to measure her activity and promptly joined Be Colorado Move. She’s been climbing stairs ever since.

More than a year later, she has walked more than 750 miles and climbed more than 4,000 flights of stairs — the equivalent of summiting Mount Everest.

In February, as Crandall went online to the Be Colorado forum to share news of her climbing goals, she attributed her motivation to the Fitbit, a tiny device that provides instant gratification, rewards and updates. She still believes in the power of the tracker, but with time, she’s come to realize that she’s ultimately responsible to herself.

Tagged with:
Be Colorado, employee services

State FAMLI program expands paid leave to all workers in 2024