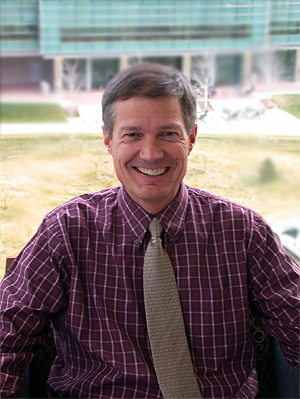 A casual conversation and a desire to be “part of the solution” inspired Kirk McCrimmon to reach out to an area program that helps change the lives of people who have a hard time finding jobs because of barriers such as homelessness, prior criminal offenses or previous substance abuse.

McCrimmon, who has been the division manager of surgery/urology at the University of Colorado School of Medicine for seven years, is certified to facilitate Franklin Covey workshops, which are based on Stephen Covey’s best-selling book, “The 7 Habits of Highly Successful People.”

Beginning next month, McCrimmon will teach the principles, skills and tools that Covey first wrote about in 1990 to 15 or so clients of DenverWorks, a nonprofit agency that assists people with job preparation and placement.

Covey wrote that true success could only be realized through a balance of personal and professional effectiveness, and the habits he espoused included proactive behavior, life management and self-renewal.

McCrimmon has been facilitating Covey workshops for 10 years and has been offering them to colleagues and other interested parties. Last summer, however, an acquaintance – a recovering addict -- told McCrimmon that he was having difficulties making choices, getting everything done and staying focused. The issues the man needed help with dovetailed with what McCrimmon had been teaching and he stepped in to help.

“I went through the seven habits with him, particularly focusing on putting first things first and using a planner,” McCrimmon said. “I worked with him every day to help him plan out his day so that he was focusing on what was most important.”

For a recovering addict, the list-toppers are actions that aid recovery. Over a few months’ time, said McCrimmon, planning became a habit. “He began focusing on doing things that pertained to recovery first, not putting them off until the next day.”

McCrimmon realized that the people who could benefit most from the training often were the ones who could least afford it. Organizations that value their workers offer them training and the resources to teach them to be more effective, he said. But the homeless, the recovering addicts and those with criminal records who want to work toward change “are not valued as much by most people,” he said, and therefore do not have the same resources.

He learned that Covey principles have been taught to inmates at the Fremont Correctional Facility in Canon City. “Inmates there wander the yard discussing one of the principles they’ve been taught – seek first to understand, then to be understood – instead of seeking to shiv before getting shived,” he said. “And the recidivism rate for program graduates is vastly lower compared to those in the general facility population.”

Richard Benson, senior human resource consultant at CU Denver, connected McCrimmon with officials from DenverWorks, and a plan was developed to host seven, two-hour workshops for the organization’s clients beginning June 24. One of the seven habits will be discussed each week.

McCrimmon, who is facilitating the workshops for free, and DenverWorks are seeking funding for the costs of program materials. There are several ways for organizations or individuals to donate to the cause, including hosting their own discounted workshops, which will generate funding for DenverWorks program; sponsoring a DenverWorks participant; purchasing program kits; or giving cash.

McCrimmon hopes future programs can be expanded to include more participants and other nonprofit organizations.