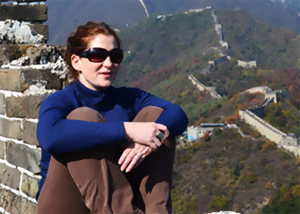 When Lisa Sabella enrolled in the graduate landscape architecture program at CU Denver, she never imagined being able to keep her academic and career goals on track—even enhanced—while enjoying a profound Chinese adventure.

She got excited when, in her first year in the College of Architecture and Planning (CAP), a new dual degree program was announced with Tongji University in Shanghai. "Moving to China for a year is not for everybody," Sabella said, "but there were a lot of people interested and we just saw it as an amazing opportunity."

Sabella applied for the program, which requires a year at Tongji and completing a master's thesis, but was apprehensive about her chances. Her undergraduate degree was in English and she noticed that fellow students generally had more landscape coursework in their academic portfolio.

"The day Ann Komara (associate professor and chair, Department of Landscape Architecture) told me I was accepted my jaw hit the floor," Sabella said. "It wasn't the kind of thing I was going to turn down."

So, along with her husband, whose local employer allowed him to work abroad for a year, they packed their bags and left in early 2013 for Shanghai, China's largest city at 23 million inhabitants.

Komara said the program got started when Tongji University, one of China's top architecture schools, approached CU Denver to launch a dual degree in landscape architecture. Various faculty ties between the two universities led to the formation, and it took a few years of discussion to hammer out the curriculum and student exchange details. The memorandum of understanding (MOU) was signed in June 2012.

"We were the first program in the United States to have a dual degree for a Master of Landscape Architecture with China," Komara said. "It's a signature program."

The program is set up in a staggered exchange sequence so that the students meet and overlap at their respective host institution. Tongji sends students one semester, followed by the arrival in China of the CU Denver cohort in the next term. Over the summer three Chinese students returned to Tongji where they will complete a thesis, and currently one CU Denver student is in Shanghai; she will return this spring and launch into her thesis, Komara said. She noted that a thesis is optional for the Master of Landscape Architecture degree, but it's required for students in the dual-degree program.

The trio of Chinese students were exceptional, Komara said. "They were curious, talented and eager to figure out what they could get out of the experience here and take it home." 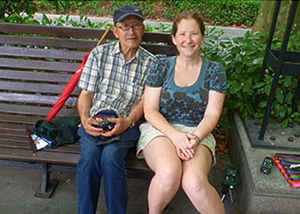 Lisa Sabella, a CU Denver graduate student in the College of Architecture and Planning, sits with a Chinese man in one of the Shanghai parks in which Sabella conducted research for her thesis.

The same can be said for the first cadre of CU Denver students in China. The year in Shanghai flew by for Sabella. She got so much attention from the Chinese—her red hair helping her stand out—that she felt like a celebrity.

"I felt like I was this little oddity in everything I did, but it was incredible and I wouldn't trade it back," Sabella said. "It was challenging, but totally worth it."

The cultural differences seeped into everything, including academics. Unlike CU Denver's collaborative environment where students work together in the studio classes, landscape architecture students at Tongji tended to work independently. "At CU Denver your education is about studio work and design experiences, but in Tongji the main focus is your thesis," Sabella said.

She was strongly encouraged to study human comfort in landscape microclimates by her Chinese advisor. It turned out to be a topic Sabella enjoyed examining. "I became invested in it even though it was kind of a suggested topic," she said. "It gave me confidence to design a research project of this scale and to trust my instincts."

Her research involved gathering weather data in three Shanghai parks while also surveying park users about what they would like to see changed, for comfort sake, in the parks. Even though she had a language barrier, it was surprisingly easy to get the Chinese to participate. "People were excited because they were hoping that I would help improve the parks," she said. "Parks are really important to people in Shanghai, especially to older people. It's where they go to socialize."

The research also helped her grow as a landscape designer, Sabella said. After a while, she began to understand how to critique each place—to feel the life of the park.

"It was an incredible life experience and an unmatched cultural experience," Sabella said. "Chinese culture is so completely different from everything I've ever known growing up as an American."

She feels the international experience will give her an edge in the competitive job market. She already has been working through some interviews in the Denver area.

'Citizen of the world'

Komara said the program, which awards students diplomas from both institutions, was designed to run on a three-year cycle. The first cycle will end after spring semester, and the faculty are in a period of curriculum fine-tuning "to work out the kinks." CAP sent a faculty member, Lois Brink, to Tongji to serve as a visiting faculty member for a month in June 2013. Komara anticipates inviting Tongji representatives here to be visiting faculty as well.

Typically, the CU Denver students, including Sabella, receive substantive internal department scholarship support for their year in China, for which they pay in-state tuition based on the program's MOU.

The experience is invaluable.

"It's about relationships," Komara said. "Also, it's exposure to becoming a citizen of the world and using landscape architecture as the lens."

Tagged with:
College of Architecture and Planning, students