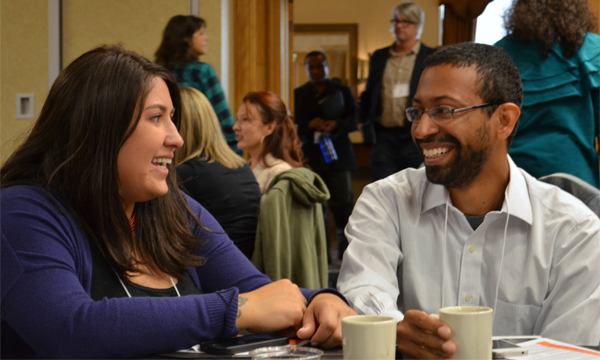 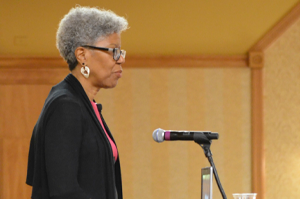 Touted as a “homemade, homegrown event” by CU Denver Associate Vice Chancellor Brenda J. Allen, the University of Colorado Diversity Summit drew more than 500 faculty and staff for a daylong program of workshops and presentations.

The Oct. 24 gathering at the DoubleTree by Hilton Hotel Denver spotlighted a theme of “Developing Our Capacities as Inclusive Campuses.”

The leaders of more than 20 workshops and presenters of the plenary all were part of the CU community.

“This is a homemade, homegrown event – from the program design to the badges and bags, you name it,” Allen told the audience. “We were able to do this because we collaborated with one another.” 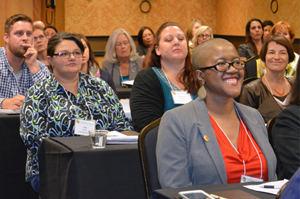 The day opened with remarks from CU Denver Chancellor Jerry Wartgow, who spoke of CU President Bruce Benson’s longtime commitment to diversity and inclusion (Benson was unable to attend the summit due to illness), and Regent Irene Griego, who talked about her experiences working in K-12 education in the state. She challenged educators at the event to strive to look at life through different perspectives.

“Every single day, I learn more about the importance of diversity, of being collaborative, of being inclusive, of being able to view and understand from multiple perspectives,” Griego said. “That’s what diversity is about.”

Allen joined Dayna Bowen Matthew of CU Anschutz and CU-Boulder for the plenary presentation on “Ripple Effects of Micro-Messages,” which delved into how unconscious bias creeps into everyday interactions and has far-reaching effects.

“We may have expressed preferences to be egalitarian, progressive and fair, but data shows us that your unconscious biases will more powerfully inform your judgments, conduct and behavior,” Matthew said. An Ohio State University video shown to the audience presented facts and figures from research on unconscious bias, especially in hiring inequities. 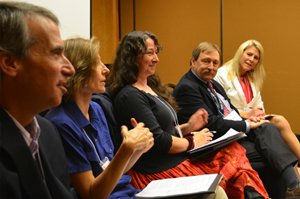 “Unconscious bias is not racism – racism is a preference that is explicit, that is expressed, that is supported by history and institutional structures,” Matthew said. “We are talking about unconscious biases, which we all have.”

Those biases can affect any number of small decisions made in the workplace and classroom: Whose calls get returned? Whose emails are answered first or last? Which students do or don’t get called on? Who do you invite to lunch?

“Remember, we all have biases,” Allen said. “It’s important to monitor yourself for TUI – thinking under the influence of unconscious biases. … We need to agree to air concerns about potential bias and engage in open dialogue.”

Open dialogue was readily available at the morning and afternoon workshops. In one of the early sessions, Laura Borgelt, chair of the Faculty Council, and the Faculty Assembly chairs from each of the campuses – Joanne Addison (CU Denver), Paul Chinowsky (CU-Boulder), Michele Companion (UCCS) and David Port (CU Anschutz) – delved into the role of shared governance in a more inclusive university.

“Through shared governance, we influence decision-making,” Borgelt said. “That can be done very positively and constructively.”

Chinowsky said faculty and staff governance groups have influence that can improve retention efforts relating to diverse faculty, staff and students. “That’s what I see as key – we can create the climate that makes people feel like they want to stay,” he said.

During the afternoon slate of workshops, Allen took on the topic of privilege, and challenged the audience to think of ways that their individual privilege might be used for good, specifically for social justice.

The concept of privilege, she stressed, is complex, and too often is simplified. She talked about her being left-handed, and inspired discussion from other lefties in the audience. They discussed small but influential struggles that will never be faced by the right-handed population, such as grappling with scissors and maneuvering in school desks manufactured for those who favor the opposite hand.

- Photos courtesy of Medhat A. Ahmed