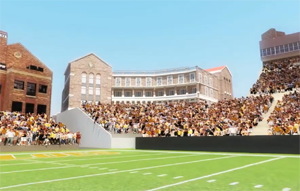 The University of Colorado Boulder plans to break ground May 12 on several new athletics facilities and upgrades to Folsom Field after a record-breaking year of private donations.

In the past seven months, the CU Athletic Department has made significant progress on the fundraising goals and anticipates meeting that goal in the very near future. Completion of the majority of the project is expected prior to the fall 2015 football season.

The proposed facilities include:

“Thanks to the generosity of numerous donors, season ticket holders, alumni, faculty, staff and friends of the university, we’re able to move forward with this project,” said Athletic Director Rick George. “It will greatly benefit our student-athletes and will allow us to collaborate with both the campus and Boulder communities.” 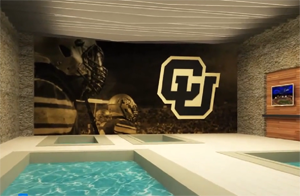 “Our success in bringing in the kind of support necessary to do these renovations is due in no small part to our membership in the Conference of Champions, the Pac-12,” George said. “We are honored to celebrate this announcement with our partners in the Pac-12 Network as we move toward a great future in the conference.”

The CU Board of Regents approved the facilities upgrades in December, but required that one-third of the funds for the $143 million project be privately raised prior to construction. No tuition money or tax dollars will go toward the project. DiStefano and George will provide a fundraising update to the Board of Regents at its April 29-30 meetings.

George, hired in August, set a goal of raising $47.6 million to serve as seed money for the project, with the balance to come from bonds.

“The performance of Rick George and his fundraising team in his first seven months at CU has been record-breaking,” said Chancellor DiStefano. “Our student-athletes, fans and community have awaited critical upgrades to our facilities for many years. We have been very conscious of the need to execute these upgrades in a responsible, deliberate and sustainable way. These facilities will help take us to the next level of excellence in the Pac-12 Conference.”

The CU Student Government, which uses Franklin Field for club sports, is working with Athletics to exchange field use. Upon completion of the Athletics indoor practice facility on Franklin Field, CUSG will be able to conduct student club sports on the football team’s existing practice fields and “bubble” north of Folsom Field and Boulder Creek. As a result, it would provide a vital increase in the size of CUSG-controlled outdoor recreation facilities. CUSG officials have voted in favor of the field exchange, and the CUSG Legislative Council is expected to take a final vote on the project at its April 17 meeting.

Construction near Folsom Field will displace the Campus Recycling Center and Facilities Management Outdoor Services. Both programs will move to temporary sites in May while permanent facilities are built elsewhere on campus.

Tagged with:
athletics, Board of Regents, DiStefano, Folsom Field