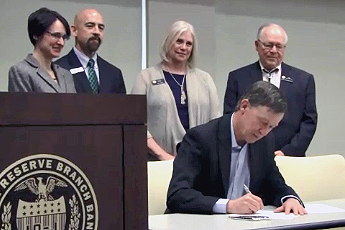 A significant boost in state funding for higher education was made official May 1 with Gov. John Hickenlooper’s signing of Senate Bill 1 (SB 1), which designates $100 million for Colorado institutions.

Of that amount, $60 will go toward institutions’ operating costs; the remaining $40 million is earmarked for student financial aid. CU’s share of the $60 million in operating costs is $16.5 million, or an 11 percent increase over last year.

SB1, also called the College Affordability Act, began as a request of the governor in his proposed budget, then was made into a separate bill by the Legislature. CU President Bruce Benson, who spoke in support of the bill at a January hearing of the Senate Education Committee, joined Hickenlooper at the signing.

The bill limits tuition increases by higher education institutions to 6 percent this coming year and the following year. Rates for CU campuses approved by the Board of Regents in March are well below that figure, with increases affecting resident undergraduate tuition at about 3.4 percent.

Meanwhile, another funding measure with implications for CU, House Bill 1319, awaits the governor’s signature after the House on Tuesday approved Senate amendments.

This bill, introduced by outgoing House Speaker Mark Ferrandino, changes how state funding is distributed among higher education institutions. CU expressed concerns about the bill’s impact and unintended consequences. Some colleges and universities would benefit from such changes; others, including CU, stand to lose funding. After the bill’s introduction, CU’s Government Relations team worked to make several changes, most of which were successful.

The bill will not take effect until 2015-16. The Colorado Commission on Higher Education is tasked with working with CU and other higher education institutions in order to finalize many of the bill’s details. That work begins this summer.

Next week’s issue of CU Connections will have a final wrap-up of news from this year’s legislative session, which was scheduled to conclude late Wednesday.