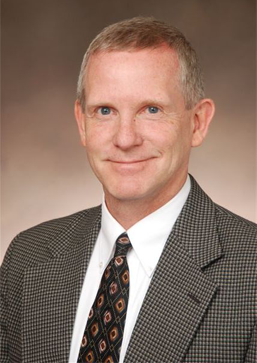 Last month’s World AIDS Day (Dec. 1) included an important message of prevention: Get tested. While the number of new HIV (Human Immunodeficiency Virus) cases has declined and the number of AIDS-related deaths has decreased, there still are more than 33 million people worldwide who carry the virus in their bloodstream. Some of those people don’t realize they are infected.

At the University of Colorado, the message of prevention is one that’s emphasized every day, especially by Steven Johnson, M.D., a professor of medicine in the Division of Infectious Diseases at the University of Colorado School of Medicine on the Anschutz Medical Campus. He earned his medical degree from Northwestern University, and completed a residency at Fitzsimons Army Medical Center and a fellowship at Walter Reed Army Medical Center in Washington, D.C. In 1994, he began work at CU as the director of the Infectious Disease Group Practice and its HIV/AIDS Clinical Program.

Thousands of people have benefited from Johnson’s clinical work with HIV as well as his numerous efforts – locally, nationally and in the world – to educate care providers about the virus through lectures, presentations and authored publications. He also is active in the local and medical communities and, in 2000, received the University of Colorado Infectious Disease Fellowship teaching award.

Through his roles at the university and the MPAETC, he has worked to ensure that care providers in urban and rural areas alike can recognize and/or treat the disease, along with those opportunistic infections that often develop as a person’s immune system weakens.

“Only about 28 percent of people living with HIV in the U.S. have an undetectable viral load,” which means the virus isn’t detectable in their bloodstream, said Johnson. “That means they are diagnosed, in care, on therapy and maximally benefitting from therapy.” The biggest challenge for care providers and the country, he said, is to increase the number of those who are HIV-positive and have become members of that “undetectable” category.

1. How did you become interested in working with HIV-positive patients and HIV issues?

It was really about timing. I went to medical school from 1980-84, so the disease was described during my time in medical school. The first patient I remember looking in on was at Northwestern (in ’82 or ’83) before the discovery of the virus and before it was clear how things were transmitted. I paid for medical school with an Army scholarship. When I came to Fitzsimons in 1984, it was about the time HIV testing became available. The military was starting to test people they took care of – there were many who were HIV-positive – and the Army had to figure out if these individuals were sick, if they could do their jobs, and if they needed additional treatments and so on. Fitzsimons also was a regional referral center for HIV-positive individuals, either active duty or non-active duty. One of the infectious diseases physicians there was very influential because he was interested in HIV but approached the patients in a nonjudgmental fashion. He wasn’t afraid to hug people, draw blood, shake hands, or do rectal exams – the things that other health care workers were concerned about. That led me to apply for an infectious diseases fellowship at Walter Reed, which also was a large referral center for HIV and had a clinical and research program.

2. After all these years, why is it still important to educate care providers in Colorado about HIV infection?

We’re really teaching different providers different things. In the late 1990s, when I would present a slide that showed the decline in mortality that had occurred over the years, people in the audience would gasp. They couldn’t believe how successful these new therapies were. Now we’re 15 years out from there and a lot of people, especially younger physicians and students, have grown up in a medical world where HIV is treatable. To them, it is a problem that happened in the past, like polio, so they see HIV in a historical context.

There are also geographical and case differences. If we go to an HIV clinic in Colorado Springs, we provide content that is higher-end, like drug interactions with medications, resistance testing for the virus, or treating opportunistic infections -- things that are more appropriate for a clinic in a metro area that is treating HIV folks. If we go to Springfield, where there is no HIV care, we’ll focus more on HIV testing or how to recognize the infection. We’ll also stress referral resources so that if they encounter someone with HIV, they can get those people into care right away.

3. You mentioned how medical students and young physicians think of HIV differently. As a society, we seem to talk less about HIV-AIDS. How has that affected what you’re trying to do and what are some of the biggest challenges you face?

HIV’s specter as a uniformly lethal disease has been replaced by the fact that, in many patients, it’s a chronic but manageable disease. We have about 1,500 patients under care at the HIV/AIDS Clinic at the University of Colorado Hospital. Ten or 15 years ago, you might have an annual mortality rate of 10 percent to 15 percent. Most were AIDS deaths. Now, that rate is 1 percent, and the majority is non-AIDS deaths, related to co-morbidities illnesses that may come along with HIV, like Hepatitis C, higher rates of tobacco use that lead to lung cancer, and higher rates of mental illness. We preach in our clinic that individuals who take medications and stay in care have the potential for a normal lifespan. Because of that, HIV isn’t on the radar as much, and that is part of the reason why you don’t hear as much about it.

One of the issues that we face is co-morbidities. It used to be that I could come up a combination of HIV medications to effectively control the virus, and we can still do that in a vast majority of individuals. But in our clinic, 15 percent to 20 percent of the people are co-infected with Hep C or Hep B; 40 percent to 50 percent either smoke or have a strong history of smoking; and 25 percent to 50 percent have a history of mental illness. So we’ve had to retool what we’re doing to focus on co-morbidities and make sure we’re providing excellent mental health care, tobacco cessation programs and treatment of viral Hepatitis or other conditions. Ten or 15 years ago we were doing HIV-AIDS specialty care, and now we refer to it as HIV primary care. We’re providing the expertise necessary to treat HIV and its complications, but we’re doing it in a primary care setting where we also monitor things like blood sugar, blood pressure and health habits.

The other challenge is retention in care. There is a subset of people living with HIV who are not doing as well as the majority and that’s predominately related to the inability of the patients to be in regular care. Some of that can be financial, cultural or include health literacy issues.

In addition, a recent Centers for Disease Control study estimates that nearly 1.2 million people in the United States have HIV, but about 21 percent are undiagnosed. Other people have been diagnosed and aren’t in care, while some are in care but aren’t getting treatments. The goal is to get people into therapy and to treat them so their HIV viral load is undetectable.

4. How has HIV changed science and medicine?

The understanding of the immune system has been greatly enhanced by research into HIV, which targets specific white blood cells. In fact, the whole field of immunology has greatly benefited. Medications to fight HIV have been models for development of medications for other diseases, such as protease inhibitors for Hepatitis C. Fifteen years ago, protease inhibitors were developed for HIV.

5. How are we doing on HIV prevention?

This year has been remarkable in the area of prevention studies. First, people who know their HIV status are changing their behavior and are less likely to transmit the virus. There also has been a series of studies that have shown success in the reduction of disease transmission by those HIV-positive people who take medications before sexual activity.

A big focus on prevention is testing. We’re trying to find the 21 percent of the epidemic who are living in the U.S. with HIV and who don’t know it. That figure in Colorado is 2,000 or 3,000 people.