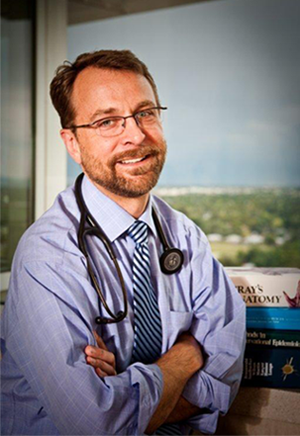 From the beginning of his medical career, Mark Earnest, M.D., Ph.D., witnessed numerous inequities in the health care system and has worked to change the factors that foster them.

“I heard lots of stories that raise your blood pressure because of how unjust the system is,” said Earnest, who, after graduating from Vanderbilt Medical School in 1990, served a three-year residency at the University of Colorado then accepted a junior faculty position in the School of Medicine.

One narrative particularly stands out, he said. A couple had retired from their jobs to open their own business, but because of the expense, gave up their health insurance. When the wife experienced chest pains, she went to a community health center that put her in an ambulance and sent her to an emergency room. She ended up with a heart stent and a bill for $18,000, Earnest said. Six months later, she had a recurrence of symptoms, but because she worried about the expense, she insisted that her husband take her to the community health center. The center said she needed an ambulance, but she refused and asked her husband to drive her to University Hospital because she thought it would be less expensive. She took her last breath in the emergency parking lot.

“That one always comes back to me as being particularly cruel, especially when you hear all the political rhetoric around having skin in the game and how we need to make people more responsible shoppers for their health care,” said Earnest, who spoke with the husband. “The really bitter irony is that this person died shopping for health care.”

Earnest is a professor of general medicine and the co-founder and director of the LEADS Program (leadership, education, advocacy, development and scholarship), which is aimed at addressing the needs of the underserved and disadvantaged. He also is director of REACH (Realizing Educational Advancement and Collaborative Health), an interprofessional education program for the Anschutz Medical Campus.

In 2011, he was named a President’s Teaching Scholar. “It’s a great honor to be selected and an enriching opportunity to get to know these wonderful people who spend time thinking about how to better teach students.”

1. How did you become involved with LEADS and what is the intent of the program?

I had the historical misfortune of starting my practice right as things came to a head around the Clinton health reform. When I went through training, the implicit – and, to some degree, explicit – message I got was that your job was to take care of patients and to meet the needs of people, not to make decisions about resources. It was unethical to think about the cost of something; you only were supposed to think about needs. I entered practice in August of 1993, and within about a year, things changed dramatically both in my practice and the community. We had a huge influx of for-profit health systems buying up community hospitals. In my practice, I could see anybody that needed to be seen and I could send them anywhere they needed to go. But with the bigger system changes, that became impossible very quickly.

I knew almost nothing about health policy and financing, but I knew very clearly that what I saw was not right, and I began to look for a place to make a difference. When I would go to systems leaders and tell them that they had to change something, they would ask, “What would you have me change and how would you have me change it?” It was pretty clear I didn’t have any answers; I just wanted them to fix it. I had a crisis of conscience: I had to decide whether I would go to a community health center or someplace where there was a model that allowed me to see whomever I wanted and not worry about the inequities I saw, or I had to figure out how to do something about it.

There was an organization in town called Colorado Coalition for the Medically Underserved and I began attending meetings and summits, and as time went on, I became more involved in advocacy. I got a grant from the Open Society Institute in the physician advocacy fellowship program, and that supported my time to work with the coalition. It was a powerful developmental and learning experience to have the chance to see policy in action and how advocacy can accomplish a great deal. I was struck by how ill-prepared I was in my medical training for doing that kind of work. I became increasingly convinced that our traditional biomedical model misses the mark and how we need to think more broadly about the role of medicine, specifically physicians and other health providers, in society.

That’s how the idea of LEADS was hatched. The intention was to broaden the notion of professional purview beyond the purely clinical role. Providers constantly see things that happen to people they care for professionally that they can’t impact. These are the result of factors in community, the family and structure and policy. You’re literally steeped in that but have no script about what to do about it. Our goal was to first give students a lens with which to see this and then give them a set of skills to be effective and active in what they see.

2. What are some examples of how students have implemented what LEADS promotes – acting on connections between the clinical practice and the community?

One of the first projects we did was to work with a group of promotoras (lay health educators in the Latino community) to develop a nutrition curriculum to lower fat and calorie content in meals. We also had students who developed a text-based, sex education tool. A high school student who had a question about contraception could text it to a service, ICYC (In Case You’re Curious), and they would get a customized but standardized response. The concept has taken off and was featured in The New York Times, and Planned Parenthood has picked it up and has continued to grow the program.

3. What does an average day in your university life look like?

I have days that are largely focused on patient care and I go to great efforts to preserve those because it means a great deal to me and is what grounds everything else. It seems the other days are a lot of meetings. I lead and direct an interprofessional education group – REACH -- that involves all the different schools and programs on campus. The work I’m doing now is related to workforce policy, to helping devise systems skills that are going to be required of our students as they move into the reformed health system. Historically, we’ve trained students in professional isolation. We assume the key to success is technical competence – that you need to know as much as possible and need to be smart enough to not miss something. And we assume that things like teamwork and leadership are somewhat innate. Yet when we look at why health care fails to deliver, most of it has to do with the fact that we’re ineffective at creating a system where things happen the way they should.

4. What aspects of health care/medicine worry you most? Which ones hearten you most?

What worries me most is that any way you look at it, it’s unsustainable. Health care has gotten more expensive and more exclusionary, and to some degree, less effective at a population level. We may have gotten better at helping people survive breast cancer, for instance, but a report from the Institute of Medicine shows that the United States is at the absolute bottom of OECD (Organization for Economic Co-operation and Development) countries when it comes to overall health. We spend this huge amount of money on highly intensive clinical care and we see to some degree flat or declining health statistics. To some degree, medicine has been complicit with a lot of the growing inequality because health entities don’t see it as their business. The amount of resources that we put in health care is actually starting to starve investments that, in the long term, would probably have more impact on health. For example, there’s less money available for education because we spend more on health care. We would get far more in terms of population health benefit if we just got every kid to graduate from high school and as many through a college degree program.

Our students hearten me – their energy and optimism and talents. I’m an optimist at heart. I think we’ll solve this and realign things, and to some degree, the reality heartens me. As somebody said, the definition of unsustainable is that something will stop. Things will change dramatically because they have to. My hope is they will change in ways that are productive and enlightened and we’ll come together for the common good.

5. How do you relax when you’re away from work responsibilities?

I’m a fairly serious photographer and have a portrait studio in my basement. Mostly I photograph kids and newborns of families and friends we know, and I also photograph the outdoors. I play guitar – my wife surprised me with a new electric guitar for Christmas. I’ve wanted one since high school. I play a broad mix of blues, folk and some pop. My son has just started to play so I really enjoy duets with him.