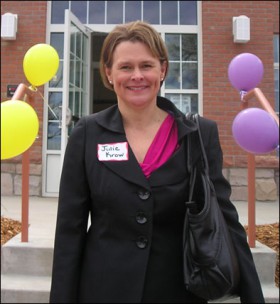 Julie Krow's father was a psychologist; so was her mother. With such influences and a passion for helping people and the underserved, how could she not follow in their footsteps?

After earning a degree in social work from Illinois State University, she began her career in social services. She worked in England and in Colorado in a variety of roles including in mental health, substance abuse and child welfare, and along the way earned a master's degree from the University of Northern Colorado.

The intertwining talents she developed in each of those positions has helped make her so successful in her current role as deputy executive director forAddiction Research and Treatment Services (ARTS) at the University of Colorado School of Medicine, department of psychiatry, Anschutz Medical Campus.

Her most recent accomplishment: the opening in April of the Baby Haven Therapeutic Early Childhood Education Center for children up to age 5 for mothers who are in alcohol and substance abuse treatment at The Haven, on the Fort Logan campus. The Baby Haven program not only treats drug-exposed infants, but also provides a safe and educational child-care setting, allowing mothers to fully concentrate on their treatment.

Krow worked for eight years for the Colorado Department of Human Services. One of her first roles was as a caseworker who investigated child abuse and neglect.

"We often sent women who were pregnant or had young children to The Haven, but at that time, it had capacity for just a few – three or four – moms with babies. I always liked this program and thought it had good outcomes," she says. "But I felt that by the time we were investigating child abuse and neglect, it was sometimes too late. I wished we had been able to intervene earlier. That's part of the reason I took a job with ARTS."

Before a baby is born, the program provides moms with parenting classes, including all-important nutrition education and coping skills, drug and mental health treatment, and medical services. Supplies – clothing, diapers and other needs – all are donated to the program.

"They come in here addicted to drugs, weighing 80 pounds, their front teeth missing, pregnant and begging for help," Krow says. After the program, anywhere from nine to 15 months, depending on the client, "they leave as beautiful, confident, self-sufficient, productive members of the community. They work, they pay taxes; they are no longer a drain on the system." 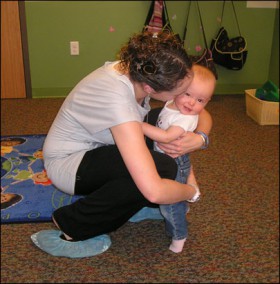 1. How is the Baby Haven different from other programs in the state/nation?

There are no other programs in the state that do what we do: research, treatment, teaching and training. And no others are designed and built for ages 0 to 5. This is a cutting-edge program, bringing together the needs of children and their moms, and it may be the first of its kind in the nation.

During my early time with ARTS, I used to go to Denver County Jail and was shocked about how many pregnant bellies I saw. Pregnant women would come up to me and ask if I knew where on the waiting list they were to get into The Haven. They would be crying. I knew we needed to expand to meet that need because it doesn't make sense to keep a pregnant woman in jail when you can have them in a safe place, providing substance abuse and mental health treatment and parenting classes.

When I started in 2004, we really were a great substance abuse program, but children were kind of an afterthought. A few staff watched them in a building built in 1888. So we started layering in parenting classes and other child-protection components, and GED and vocational services and culinary arts. It's wonderful to provide substance abuse treatment, but you don't want to open up the doors and say, "You're clean and sober and done with treatment. Goodbye and good luck." People need a job and skills; if they don't have a place to live they'll relapse.

We would still have a waiting list of two or three months. That can be critical because if a woman is referred to you and she's seven months pregnant, you want to bring them in as soon as possible, not wait until after the baby is born. It's hard enough adjusting to a baby, so imagine being in substance abuse treatment at the same time. In 2007 we opened the Haven Harmon House. That house is used for women who are regaining custody of their children.

Sometimes we'd admit someone like a mom living in her car with a young baby or someone referred from social services who they thought would be OK if she were in a safe place with drug treatment. In the past we didn't have the capacity to serve everyone and now we do.

We also have a day-treatment program for women with older children. They can come here during the day for treatment and return to their apartments in the community. 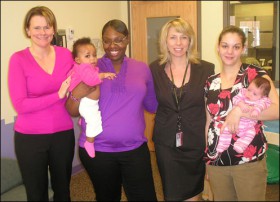 2. How did you get all of these entities to come together to begin this program?

All of the jobs I had along the way have helped me to do what I wanted to do here. And I've been lucky because the university allows you to be very creative and is an environment where creativity is encouraged.

When I came up with the idea for the first Qualistar-rated, therapeutic early childhood education center for drug-exposed infants on state property, anyone could have said "no." The state, the university, Friends of the Haven, 27 foundations, a thousand donors. Those are large bureaucracies and anyone could have said "no," but everyone said "yes."

I remember a critical meeting where we sat down with key leaders from the Colorado Department of Human Services, Fort Logan, the University of Colorado and Friends of the Haven to talk about building this, and the amount of money we'd need. This is state property, so the question was, "Who would own the building and how can you build a privately funded entity on state property?" We took a step back and said, "Does it really matter who owns it? The purpose is to help pregnant women and their children." Then everyone relaxed and we figured out how to make it work.

The law firm Holland & Heart donated hundreds of hours to come up with a legal agreement. That's one of the successes of this program. It's a very unique public-private partnership, and in this economic climate, is really exceptional.

There's nothing else like it in the state and perhaps only a few in the rest of the country. That's partly because they're so hard to put together. Funding is nearly unworkable. You get a little bit for child care, a little for women's treatment, a little more for vocational and GED programs. You take all of these strings and try to braid them together.

3. Why is this type of program so important?

When a pregnant mom is in jail or her child is in foster care, there are enormous costs to the court system. A drug-addicted baby in a neonatal care unit is a big cost. And there's a huge cost to the baby who is separated from his/her mother. I believe, and evidence shows, that if a mom and baby are separated at birth and the baby enters the child welfare system, there's a good chance they'll never reunify. Then the baby starts that track of being in foster care, being in the juvenile justice system, the adult justice system, having a baby themselves who winds up in foster care, then the juvenile justice system and so on.

We'd seen up to three generations of women in the jails at the same time. So we wanted to break that cycle.

4. What kind of success rates do you have with the moms who have graduated from the program?

We don't have outcome data yet for the new Baby Haven. There was an independent study done by the Department of Justice around recidivism. It only counts clients involved in the justice system, and of course, all of the moms aren't involved, so it's not comprehensive, but I think it's a pretty good indicator. It shows that one year after leaving the program, 96 percent of the clients had not relapsed or recidivated. After two years, the number was 90 percent. That's the lowest rate of recidivism in the state of Colorado.

Our job placement rate was almost 100 percent, and our work-participation rate was something like 96 percent. Those people then move into the managerial positions. And we're keeping kids out of the child-welfare system, which I think is incredibly important.

Almost all of our babies are testing at or above developmental levels. And the birth weight of our babies is more than 7 pounds. That's another measure of success because drug-exposed babies could potentially have a low birth weight and could then be in intensive care, which is a huge cost to society.

5. Throughout your career, especially when you were investigating child-abuse cases, and even now, I'm sure you've witnessed some heartbreaking situations. How do you stay positive?

I live on a 10-acre ranch with a wonderful husband and a great family. I also see a lot of hope in our population and I try to focus on the positive aspects of how we can intervene and help people to get better.

And there are the success stories. When I see a woman walk in who graduated our program and is healthy and successful and has a job with a 5-year-old who is succeeding in school, it makes everything worth it.

Sometimes I just can't write another grant or policy so I spend 5 minutes with the babies – and see their smiling faces – and their healthy moms. Without the program, some moms have said they'd be in jail or dead and their children would be in foster care. It's very inspirational and motivating to know that you can make a difference with this program. It does save lives.