Unprecedented times led to an unprecedented meeting of the Board of Regents, which gathered not in person but virtually from their homes across the state.

The April 2 meeting – which brought together board members, President Mark Kennedy and university leaders via Zoom video conferencing – also was livestreamed. The abbreviated agenda was dominated by expressions of appreciation for students, faculty, staff and medical care providers during the current pandemic, and by discussion of anticipated financial ramifications of the coronavirus outbreak. CU’s COVID-19 costs so far are estimated at $44 million systemwide. 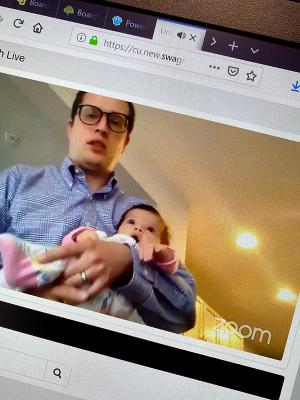 Baby Lucy joined her father, Regent Jack Kroll, for part of the meeting.

The April meeting typically includes votes by the Board of Regents on tuition, fees and compensation. As the public portion of the meeting began, Kennedy announced in an email communication to the CU community that university leadership had recommended the votes be postponed.

“Delaying the vote until one of the next scheduled meetings (May or June) will provide us with a clearer picture of revenue from the state, federal stimulus/relief funds and enrollment,” Kennedy said. “As you may know, the state has delayed its budgeting process. By waiting, we will also learn more about the potential enrollment impacts on the summer and fall terms.”

Kennedy also noted that a previously proposed compensation and merit increase pool for July, the start of the new fiscal year, no longer is feasible given the change in circumstances. “We will defer that decision until campus enrollment census is complete, likely in November.”

The meeting featured a budget update from Todd Saliman, vice president of budget and finance and chief financial officer, who noted that state revenue forecasts have declined and are expected to continue to do so. A new CU forecast shows that revenue would fall some $2 billion short of funding the governor’s 2020-21 fiscal year budget request, though federal relief funds could help mitigate that.

Just as uncertainty clouds timelines for how the health crisis plays out in the population, the unknown makes difficult projecting enrollment and revenue changes, leadership said during the April 2 meeting.

“Regents want to know where the money is and where it isn’t,” said Chair Glen Gallegos. “We don’t know how long this (downturn) is going to last or where it’s going to go.”

CU Denver Chancellor Dorothy Horrell said “there’s just a lot of uncertainty right now. We’re still early on in this. … All of us are in this together and really working well across the system and the four campuses to learn from each other, borrow the good ideas and try to have some consistency in the way we’re approaching this.”

“I feel like, students are not going to stop going to college,” he said. “We are going to come out stronger.”

“We learned very quickly that we had to make decisions quickly,” he said. “That starts to change the culture of how we work with faculty and staff in moving forward. We have opportunities to make things better for the future.”

CU Anschutz Chancellor Don Elliman echoed Horrell’s assessment of the campuses and system being drawn closer together by the crisis. He also cautioned that greater challenges remain.

“Don’t be fooled by the projections,” he said. “The latest stories are that (the outbreak) should peak sometime in mid- to late April. But we’re going to be dealing with the tail of this thing for a long time to come. We need to plan for that.”

In other business at the April 2 meeting: