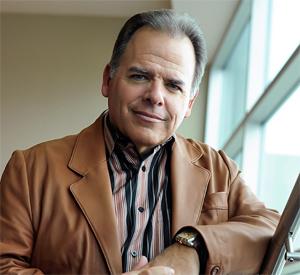 Spero Manson is a Distinguished Professor of public health and psychiatry and leads the Centers for American Indian and Alaska Native Health at the Colorado School of Public Health. His office, in the Nighthorse Campbell Native Health Building at the CU Anschutz Medical Campus, reflects the communities he serves through the artifacts found there: a child’s snow sled made of whale baleen, a reed hat, and sculptures of whalebone and soapstone.

“They remind me of the importance of not only good science, but science that is locally meaningful and rooted in benefit for the people with whom I work,” he said. “I am very fortunate to work at the centers, the university, and communities around the country where I can bring to bear the knowledge and experience that I’ve been blessed with over the last nearly four decades.”

Manson was a colleague of James Shore at the Oregon Health Science University in Portland, Oregon. When Shore moved to the University of Colorado (where he later became a chancellor), he recruited Manson, who followed in 1986 with a grant from the National Institute of Mental Health to establish the Nation Center for American Indian and Alaska Native Mental Health, which gave rise to today’s program.

He is proud that his own and his colleagues’ work has introduced evidence-based practices into the “real world of Indian health across the country … with enormously powerful outcomes,” including reducing the incidence of diabetes and the risk of suicide, and providing supportive care for people with emotional and psychological needs. Their efforts to increase the number of American Indian and Alaska Native medical doctors and Ph.D.s also have been fruitful.

Manson said younger generations of Native scientists are “beginning to shape today’s research agenda in the image that they and their communities believe are most beneficial.” And he is especially pleased to be “broadening collaboration with colleagues across the CU system, capitalizing on the enormous insight and resources they can bring to the table to address issues of joint concern in Native communities.”

I and my large extended family hail from the Turtle Mountain Indian Reservation in North Dakota; growing up, I moved with my family 11 times in 12 years, settling in Seattle, Washington. I’m the second eldest of 67 first cousins on my father’s side. As the eldest male, there was a great deal of family pride and energy invested in me. My family always assumed I would be a medical doctor. I ran afoul of calculus during the second quarter of my freshman year at the University of Washington. When I went to see my academic counselor, she told me that if I couldn’t master calculus, then I probably was not right for medicine. What do you know at 19 years of age? I cast about for a quarter or two, and came across a medical anthropologist who was returning from American Samoa after two years of field work there. During his lecture, he talked about how major changes in the lives of American Samoans – governmentally and economically – caused changes in behavior and health, not the least of which was the rapid increase of obesity, diabetes and alcohol and substance abuse.

I immediately saw the parallels to my own experiences growing up. He talked about how understanding social and cultural factors was critical to preventing and treating these diseases and disorders. I realized this was the attraction medicine had held for me, but that medical anthropology would allow me to pursue my dream more directly. I switched to medical anthropology and have followed this course of study throughout my career.

2. What are the goals of the Centers for American Indian and Alaska Native Health and what has been accomplished so far?

There are three major challenges to making a difference with respect to the health and well-being of American Indian and Alaska Native people. First, the knowledge base available to direct our work has been relatively impoverished. The common mission of all eight of the centers is to contribute to and inform, in a culturally sensitive fashion, this knowledge base. The second challenge is to apply this knowledge to programs, policies and practices in ways that honor the investment people make in sharing such knowledge. The third is to build the capacity for Native people to participate fully in addressing the first two challenges.

In 1998, a study found that of the more than 30,000 research grants and contracts issued by the National Institutes of Health, only nine American Indians or Alaska Natives were primary investigators (PIs). At that time, I held five of those so there were really only four of us represented out of 30,000. So a part of our work focused on increasing the numbers of American Indian and Alaska Native medical doctors and Ph.D.s to successfully compete for sponsored research. A recent report revealed that 110 American Indian and Alaska Natives are PIs or program directors of NIH grants: Our efforts account for half of them.

Specific examples of our achievements include the Special Diabetes Program for Indians (SDPI) funded by Congress in 1998 and reauthorized each year since to implement evidence-based practices to prevent diabetes among Indian and Native people across the country as well as reduce the risk of cardiovascular disease among those already suffering from diabetes. For the past 11 years, we’ve coordinated and supported this initiative, working with more than 160 tribal communities and programs throughout the United States. The SDPI diabetes prevention projects mirrored the original outcomes of the efficacy trial that informed the evidence-based practices from which the initiative is built. They achieved a 57 percent reduction in incident diabetes among the many thousands of people who participated. Grantees also accomplished major reductions and greater control in diabetes among those who do suffer from it.

Another hallmark has been the ability to demonstrate that traditional healing ceremonies are efficacious in their own right and not only ameliorate serious emotional and psychological problems such as Post Traumatic Stress Disorder among returning American Indian combat veterans, but also contribute to the long-term well-being of Native peoples in general. This work led to a 1998 agreement with the Department of Veterans Affairs to reimburse one tribe in particular for the cost of 13 tribal ceremonies performed on behalf of their combat veterans. It continues today and has broadened to include reimbursement for tribal ceremonies in other Native communities.

Yet a third example is that since 1998, we have trained nearly 50 American Indian and Alaska Native M.D.s and Ph.D.s to become highly successful, independent scientists. Indeed, they have acquired more than $60 million in NIH grants and contracts and have published more than 350 peer-reviewed journal articles.

3. You recently returned from Alaska. What did your work there entail?

We have more than 40 active studies across the country. My own work in Alaska entails several different initiatives. One focuses on improving the cultural underpinnings and effectiveness of behavioral health programs. I work with several large Alaska Native health organizations, training their personnel to deliver high-quality, culturally informed, evidence-based services. When I entered the field in 1978, there was enormous stigma surrounding alcoholism and mental illness. Almost 40 years later, the stigma associated with alcohol abuse is virtually eliminated as a consequence of leaders in our communities stepping forward to acknowledge these problems and to share their personal journeys of recovery. The same is not true for mental illness. Native people seldom seek help to deal with emotional, psychological problems; however, we know that many people – regardless of the stigma – will disclose these problems to their primary care providers, nurses or physician’s assistants. So we began to screen – in primary care settings – individuals who suffer from depression, alcohol abuse and dependence, or who are at high risk for suicide. We have achieved remarkable success by dealing with these issues immediately and by not allowing the stigma of mental illness to impede the treatment or prevention of such problems.

Another focus of my work during this trip was to continue to build a network of tele-behavioral programs. Many rural, isolated Alaska Native villages don’t have available to them the mental health resources that we do in urban America. We bridge these gaps in culture and geography by bringing patients and clinicians together through real-time videoconferencing. Under the direction of Dr. Jay Shore, we support 14 tele-behavioral health clinics throughout the West, providing services these distant communities otherwise would never receive. Our research has demonstrated that such services are clinically and cost effective.

4. You recently were selected to sit on a panel of experts that will steer President Obama’s Precision Medicine Initiative. What is your role on the panel?

The panel is concerned with how to personalize medicine and individualize treatment in order to maximize patient benefit. Part of the president’s initiative is to assemble more than a million people from across the country to participate in a longitudinal study that will provide us with deeper insight into increasingly precise treatment approaches. One of the challenges is to ensure that all citizens are included and have the opportunity to benefit from this effort. Unfortunately, initiatives of this nature historically under-represent racial and ethnic minorities, which calls into question the merit of the findings and their generalizability. One of my roles is to assist the NIH and other presidential advisers in developing appropriate and hopefully successful strategies for including under-represented minorities in this initiative. I also am expected to assist the NIH in meaningfully translating the results of the initiative into terms the under-represented will understand and find valuable in their day-to-day lives.

The initial phase of work is to be concluded in late fall of 2015, after which I will continue to advise the president and director of NIH about the implementation in the years ahead.

5. What hobbies, leisure activities or community work do you enjoy?

About 20 years ago, when my professional life threatened to totally take over my personal life, I committed to pursuing a lifelong interest in dogs and horses. I live on an 800-acre ranch south of Kiowa, Colorado, where I have six Tennessee walking horses and 10 pointing breed dogs – Irish Setters and Pointers. I participate in a sport called field trialing, which emerged in the southeast United States in the mid- to late-1800s. The dogs are bred, trained and compete in field trials, which are run off of horseback. Two dogs, two handlers, two judges, and a gallery or spectators – all on horseback – ride across the countryside. The dogs search for upland game: quail, pheasant, partridge. Upon finding such game, the dog immediately points in that classic 12 o’clock tail with front leg lifted; the other dog honors that find by pointing as well. The handler dismounts, flushes the bird, and fires a blank pistol as the bird flies off, while the dog continues to point. Dogs, riders and horses move on, continuing to search for game the remainder of the hour.

Most weekends, weather permitting and when I’m not traveling, I’m at my ranch, working with the dogs and trainer. We’ve been very fortunate: to date, five of my dogs are national champions. In April we participated in the American Kennel Club’s National Field Trial Championships where my dogs earned first and second place among other champions from across the country. I counsel my younger colleagues about the importance of striking a balance between one’s personal and professional worlds. Though it takes vigilance and conscious effort, I have been able to do so in my own life, which has allowed me to cope effectively with the stress of the workaday world. Everyone needs some form of respite.