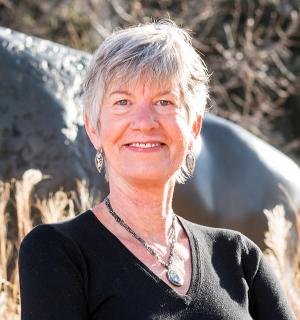 In 1989, Lesley Smith began a Visiting Scientist Fellowship with the Cooperative Institute for Research in Environmental Studies (CIRES), bringing her to CU Boulder from Maryland for what she figured would be a stay of a year or two.

“It was not a 30-year plan by any means,” said Smith, who hadn’t counted on meeting an atmospheric scientist/future husband. Today, their son is a student at CU Boulder’s Leeds School of Business, and their daughter lives and works in Washington, D.C.

Smith’s academic career as an educator and research scientist wrapped up in 2018, which is when the Boulder Democrat won election to a statewide at-large seat on the CU Board of Regents. She recently completed the first year of her six-year term. 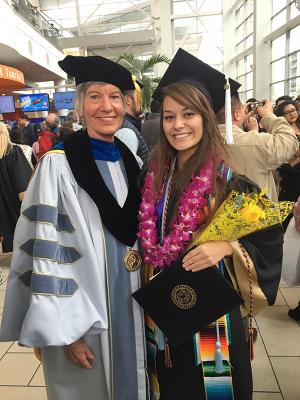 Smith with first-generation college student and RECCS participant Anjel Morine at her graduation from CU Denver.

“When I decided to run, I obviously knew CU Boulder quite well – the chancellor, the deans. I didn’t know the other three campuses very well,” she said. “On the campaign trail, I visited each campus and chatted with a lot of people. During the orientation for new board members, I visited each campus again and met the leadership teams.

“In doing that, you really realize how unique each campus is. I attended graduation ceremonies at all the campuses, where you see all the students on stage. For most students in the state, they can find a CU campus that will fit their personality and what they’re looking for.”

A voracious reader and photography buff, Smith also is an avid tennis player. Travel to Germany, where her husband’s family lives, is a favorite way of getting away.

1. While earning your doctorate at the University of Maryland, you became the first woman aquanaut in the National Oceanic and Atmospheric Administration’s underwater research habitat, Aquarius. Did that adventure entail any danger?

Except for my adviser and myself, none of the other people in the team had lived underwater before. My adviser and I had both spent a week in a former habitat. I kept telling everyone that it would be so amazing when we return to the surface. We’d look at the beach, the plants and the water, and we’d just be amazed at how vibrant the colors are. I was excited for us to experience this together.

The facility was housed 60 feet beneath the surface. For us to surface, or decompress, the technicians change the pressure within the habitat until it is at sea surface pressure. Two divers bring each aquanaut up to the surface in the final stage of decompression. We got to within 3 feet of surface pressure – and I got the bends. But it didn’t scare me, because I knew I was in an advanced facility in capable hands. I stayed in the inner lock, where a doctor stayed with me, and blasted me back down to 30 feet. Then the pain went away. Slowly, I went through the process of coming up again, but this time I was breathing pure oxygen – which was hard.

I kept thinking, “It was fun swimming with the dolphins.” I just didn’t want to stay underwater with them forever!

2. Before you were a regent, you spent eight years as a member of the Boulder Valley School Board. Have you noted similarities and differences in your service on the two boards? 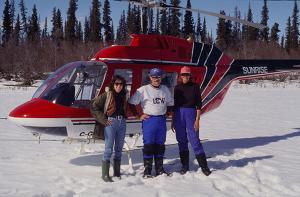 Smith and a research team in Canada’s Northwest Territories investigated lake chemistry in the frozen waters above the Arctic Circle.

I stressed this on the campaign trail, that local school boards – unlike the state Board of Education and the Board of Regents – are nonpartisan races. There can be factions on school boards, but they’re not necessarily related to one’s party affiliation.

I certainly knew that the Board of Regents is partisan. It can get too partisan for my liking. But I’m trying to find areas where I might be able to work with my Republican colleagues. Certainly, finance and tuition are always big issues.

Going through the presidential search was interesting, having gone through two superintendent searches. The processes are similar.

3. Because your seat is elected at-large, you campaigned throughout the state. As you talked with voters, did you detect differences in how CU is viewed among different populations across Colorado? 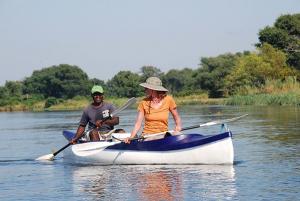 Smith’s travels have taken her to Africa, where she kayaked down the Zambezi River.

It was fortunate for me to run statewide. At CIRES, we’ve done a lot of outreach across the state. We had community college students come do research on our campus, and I’ve done professional development for teachers across the state. I’m aware of the challenges that teachers and students face, particularly in rural communities.

When I talk to voters, the cost of tuition is always the number one question. When I was out in rural areas, I talked a lot about the value a CU education will bring to rural students. We’d have conversations about how we can meet their needs.

4. Last summer, you took part in your first Board of Regents retreat, where participants were asked to wear a favorite T-shirt. What was your major takeaway from that experience? 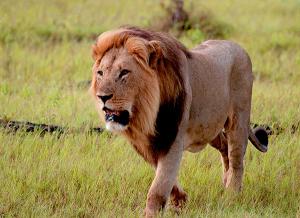 A photography buff, Smith captured a photo of a lion in Chobe National Park in Botswana.

I liked that we dug into a big issue that President Mark Kennedy has thought about a lot, which is the fact that higher education is going to be changing drastically in the next 10 to 15 years. The number of high schoolers is decreasing. Artificial intelligence is increasing, so by 2030, a huge amount of jobs will be done by AI. Places like Google are telling workers, “You don’t need to go to college. We’ll train you.”

Mark has thought a lot about those trends. I was happy to hear he does understand this, and that these are the sorts of things we’re going to be talking about at board meetings. We’ve really started the conversation of how CU is going to survive as a system in such a landscape of higher education.

The T-shirt I wore has a bell jar with a brain wearing sunglasses inside. It says, “Science Fair – As Cool as Zero Degrees Kelvin.” I quizzed the others, and a lot of them knew Kelvin is absolute zero. Of course, I gave them a hint about my T-shirt before the retreat, which helped!

5. During your campaign, you also talked about bringing a voice and perspective of a faculty member to the board. How have you been able to do that thus far? What is the role of a regent in interacting with faculty and staff members across the CU system? 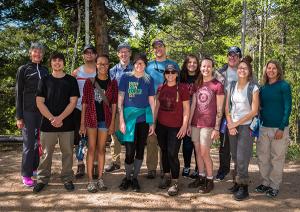 Smith is proud of the Research Experience for Community College Students (RECCS) program, which she helped develop before directing.

Having that understanding of the role of the faculty, be it teaching or research, brings a lot to the table. Most of the others don’t have that background. I listened to the voices of the faculty when we were going through the presidential hiring process.

I still have some very strong connections on the CU Boulder campus, so it’s nice to be able to get back to the campus and be at various events. People are all so curious about how I’m finding it. Most scientists and academics don’t go into political roles. I always say parts of it are fun, parts of it are interesting and parts of it are frustrating – just like when we’re doing research.

I go back to the importance of understanding the role of a governing board. At the Boulder Valley School District, we had a retreat every year and we set out the norms: What’s our role versus the role of the superintendent?

I do understand our role as regents is to oversee the president and the budget, to set policies and make sure we’re following policies. I’m really interested in getting a systemwide sustainability policy. I have met with sustainability officers on the campuses to get a sense of what’s going on. (Click here to learn about a panel discussion on sustainability organized by Smith.)

I would hope I can still reach out to faculty and staff when I have questions of interest to me. That’s what an academic does – we dig into things. That’s how my mind works.

Tagged with:
Board of Regents, Lesley Smith