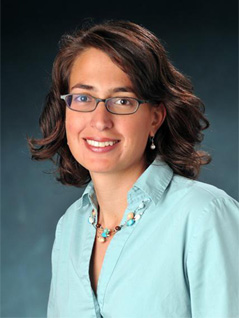 A University of Colorado Boulder physics faculty member was among 13 U.S. Department of Energy researchers named by President Obama on Monday as recipients of the Presidential Early Career Award for Scientists and Engineers.

CU-Boulder Assistant Professor Alysia Marino was honored for her accomplishments in the study of neutrino properties and the development of diagnostic tools that may be used to help design future neutrino beam facilities, as well as for her outstanding mentoring of graduate students. The PECASE award is the highest honor bestowed by the U.S. government on scientists and engineers who are early in their independent research careers.

The 2011 DOE awardees were recognized for their efforts in a variety of fields, from research to help the nation achieve energy independence and enhance national security to explorations of the elementary particles in the universe. DOE nominated the awardees and DOE’s Office of Science and the National Nuclear Security Administration fund their work.

“It is inspiring to see the innovative work being done by these scientists and engineers as they ramp up their careers – careers that I know will be not only personally rewarding but also invaluable to the nation,” Obama said. “That so many of them are also devoting time to mentoring and other forms of community service speaks volumes about their potential for leadership, not only as scientists but as model citizens.”

The winning 2011 DOE scientists are among 94 researchers supported by 16 federal departments and agencies who will receive the PECASE award. In addition to a citation and an award, each 2011 PECASE winner will continue to receive DOE funding for five years to advance his or her research.

Marino was one of four CU-Boulder faculty members to receive five-year, $750,000 grants under the DOE’s Early Career Research Program in 2010 – the most awards received by any university in the nation. The other three Early Career Award winners from CU-Boulder in 2010 were Michael Hermele and Tobin Munsat of the physics department and Arthi Jayaraman of the chemical and biological engineering department.

“Science and technology are the core of our mission at DOE,” said Energy Secretary Steven Chu. “These young scientists are using their talents to help our nation build a brighter future, so I congratulate them on their accomplishments and I look forward to their future achievements.”

The winners of 2011 PECASE awards will be honored in a White House ceremony Oct. 14.

Chancellor in White House spotlight as ‘Champion of Change’