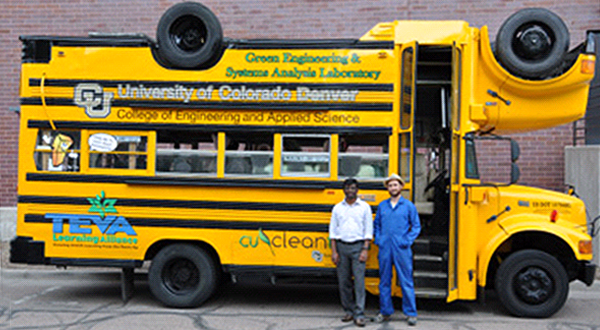 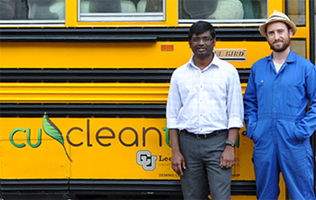 Captain Red Beard boards his bus with students in tow. The interior is modestly finished—some cushy seating, a television monitor, a sink and a fully functioning chemistry hood. The message, however, is clear: green chemistry, sustainability and science, technology, engineering and mathematics (STEM) education are all around us, and they are something to get excited about.

Dubinsky, whose alter-ego Red Beard leads the presentations, is the mastermind behind the program, which is also sponsored by civil engineering assistant professor Arun Karunanithi’s National Science Foundation (NSF) CAREER Award. The program’s mission is to get students excited about the STEM disciplines while teaching them about green chemistry and engineering.
Photo: Arun Karunanithi and Jonathan Dubinsky (Red Beard)

Since it’s inception in 2012, Dubinsky and the Topsy Turvy bus have enlightened the minds of nearly 1,000 middle- and high-school students in the Denver-metro area.

The focus of the presentation is all about natural cycles and waste reduction, and the bus is a real-life laboratory for what the program represents. For starters, it runs on used vegetable oil collected from local restaurants with which Dubinsky has built relationships. He transports the waste oil for free and then, in a self-designed centrifuge system, converts the oil to a useable biofuel that powers the bus.

“The process to convert 20 gallons of oil takes about two hours,” says Dubinsky. “In the first year of the program we spent $100 on fuel, but we haven’t purchased fuel since October 2012.” Not too shabby for an 18,000-pound bus. And an added bonus? Instead of exhaust, the bus smells like your favorite fried food when it runs.

The bus is also home to an on-board composting system. The waste that’s separated from the oil during the centrifuge process is fed to worms, whose waste then feeds plants in Dubinsky’ vegetable garden, which then feed people. This cycle of reusing waste to nourish something else is a concept called industrial ecology.

“We can mimic natural systems in our own design,” says Dubinsky, whose background is in environmental science and education.

There are also chemistry and video demonstrations as part of the sessions. Karunanithi’s NSF-funded research is focused on the “green” aspects of ionic liquids, which are solvent alternatives to petroleum. Because they are organic, they cause less pollution. Dubinsky demonstrates this through prepared experiments.

“I love seeing students expand their minds, answering their questions, and seeing how they develop after learning. Through the hands-on structure of the program, they’re getting out of the books and are able to think creatively about sustainability.”

For most students, it’s the first time they’ve been exposed to these engineering and chemistry concepts. “The goal is to get kids excited about STEM, not necessarily to teach them about it,” says Karunanithi. Through program feedback from faculty and students, Dubinsky and Karunanithi say that the distinctiveness of the program is an effective way to accomplish that.

“Typically they ask a lot of questions and think it’s really cool,” says Dubinsky. “They’re immediately hooked by the looks of the bus, and they want to know more.”

According to one 7th-grade student, “It was a really cool experience being on the bus learning new things. It would be cool to go to CU and learn all of that...Thanks for the awesome experience!"  Another says, “I used to think that being an engineer was boring, but now I believe that is can be kind of fun to do!”

College administration values the program as a prime outreach and educational opportunity.

“The Topsy Turvy bus is one of the best examples of what the College of Engineering and Applied Science should be doing in outreach,” says Marc Ingber, dean of the college. “The bus certainly catches the imagination of middle- and high-school students, and it gives them a unique perspective of how engineers can be of vital importance in solving important problems in sustainability.”

“The ultimate goal is to get kids excited about green engineering and the STEM fields,” says Karunanithi. “Hopefully, it translates to career choices.”

Three health workshops to better care for yourself and others

Send your thoughts and suggestions for the Newsletter.
END_OF_DOCUMENT_TOKEN_TO_BE_REPLACED