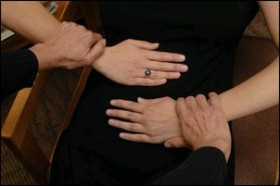 Photo by Casey A. Cass/University of Colorado
Jin Shin acupressure treatment , an ancient form of medicine, has been shown by a CU-Boulder research team to be an effective complementary treatment for those suffering from mild traumatic brain injury.

Photo by Casey A. Cass/University of ColoradoJin Shin acupressure treatment , an ancient form of medicine, has been shown by a CU-Boulder research team to be an effective complementary treatment for those suffering from mild traumatic brain injury.

A new University of Colorado Boulder study indicates an ancient form of complementary medicine may be effective in helping to treat people with mild traumatic brain injury, a finding that may have implications for some U.S. war veterans returning home.

The study involved a treatment known as acupressure in which one's fingertips are used to stimulate particular points on a person's body – points similar to those stimulated with needles in standard acupuncture treatments, said CU-Boulder Professor Theresa Hernandez, lead study author. The results indicate a link between the acupressure treatments and enhanced cognitive function in study subjects with mild traumatic brain injury, or TBI.

"We found that the study subjects with mild traumatic brain injury who were treated with acupressure showed improved cognitive function, scoring significantly better on tests of working memory when compared to the TBI subjects in the placebo control group," said Hernandez, a professor in CU-Boulder's psychology and neuroscience department. "This suggests to us that acupressure could be an effective adjunct therapy for those suffering from TBI."

The acupressure treatment type used in the study is called Jin Shin.  For the study, Hernandez and her colleagues targeted the 26 points on the human body used in standard Jin Shin treatments ranging from the head to the feet. The study subjects all received treatments by trained Jin Shin practitioners.

According to practitioners, Jin Shin acupressure points are found along "meridians" running through the body that are associated with specific energy pathways. It is believed that each point is tied to the health of specific body organs, as well as the entire body and brain, Hernandez said.

"Think of the meridians as freeways and the pressure points as towns along the way," she said.  "When there is a traffic jam in Denver that causes adverse effects as far away as Boulder, clearing the energy blocks, or in this case traffic jams, helps improve flow and overall health."

The study involved 38 study subjects, each of whom was randomly assigned to one of two groups – an experimental group that received active acupressure treatments from trained experts and a control group that received treatments from the same experts on places on the body that are not considered to be acupressure points, acting as a placebo. The study was "blinded," meaning the researchers collecting data and the study participants themselves did not know who was in the experimental group or the placebo group until the end of the study.

The team used a standard battery of neuropsychological tests to assess the results. In one test known as the Digit Span Test, subjects were asked to repeat strings of numbers after hearing them, in both forward and backward order, to see how many digits they could recall. Those subjects receiving active acupressure treatments showed increased memory function, Hernandez said.

A second standard psychology test used for the study, called the Stroop Task, measured working memory and attention. Test subjects were shown the names of colors on a computer screen. When the names of the particular colors are viewed in a different color of type – such as "green" spelled with blue letters – test subjects take longer to name the color of the lettering and the results are more error-prone, according to Hernandez.

A paper on the subject was published in the January issue of the Journal of Neurotrauma, a peer-reviewed publication on the latest advances in both clinical and laboratory investigations of traumatic brain and spinal cord injury. Co-authors on the study included CU-Boulder's Kristina McFadden, Kyle Healy, Miranda Dettman, Jesse Kaye and Associate Professor Tiffany Ito of psychology and neuroscience.

Funded by the Colorado Traumatic Brain Injury Trust Fund, the study is believed to be one of the first placebo-controlled studies ever published in a peer-reviewed medical journal showing the benefit of acupressure to treat patients with TBI, Hernandez said.

"We would like to see if the Jin Shin treatment is useful to military veterans returning home with traumatic brain injury, a signature wound prevalent in the wars in Iraq and Afghanistan," Hernandez said. The Jin Shin acupressure treatment can be taught to family and friends of those with TBI and can even be used as a self-treatment, which could allow for more independence, she said.

In a 2010 stroke study led by Hernandez, the researchers concluded that Jin Shin acupressure triggered a larger and faster relaxation response during active treatments and a decreased stress response following active treatments compared with what was seen in placebo treatments. Hernandez and her colleagues are embarking on a new study on the use of Jin Shin acupressure in athletes to see if the enhanced relaxation response and decreased stress seen in the stroke study can reduce the likelihood of athletic injury.

In 2002, Hernandez partnered with former Colorado Rep. Todd Saliman to initiate the Colorado Traumatic Brain Injury Trust Fund, a statute that has generated nearly $2 million to the state annually since 2004 from surcharges to traffic offenses like driving while impaired and speeding.  Roughly 65 percent of the money goes toward rehabilitation and care services for individuals with TBI, about 30 percent goes for TBI research and 5 percent for TBI education. Because of the statute, nearly 4,000 Colorado citizens with TBI have received care and rehabilitation services for brain injuries.

Hernandez will be honored March 3 in Denver by the Colorado Traumatic Brain Injury Program with the establishment of the annual Theresa D. Hernandez TBI Trust Fund Community Award, becoming its first recipient. Saliman also will be honored at the ceremony.

Send your thoughts and suggestions for the Newsletter.
END_OF_DOCUMENT_TOKEN_TO_BE_REPLACED