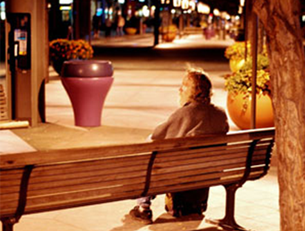 A homeless man sits on a bench on the 16th Street Mall in Denver (Photo by Chris Palmer).

Denver's controversial "camping ban" has left the homeless no place to sleep outdoors safely and legally at night, forcing them into hidden spots or to seek indoor options that don't exist, according to a report written by a University of Colorado Denver political science professor.

In collaboration with the Denver Homeless Out Loud (DHOL) community group, associate professor Tony Robinson, Ph.D., compiled survey results of 512 homeless individuals regarding the Unauthorized Camping Ban. The 80-page report details the background of the ban, survey results and policy recommendations in the wake of one of the nation's most severe laws against public homelessness.

The Denver City Council passed the ordinance in May 2012 under pressure from members of the downtown business community who argued that the growing number of homeless camping on the 16th Street Mall and Civic Center Park was negatively affecting business and harming the city’s image.

Robinson and DHOL on Tuesday presented their study to the Denver Homeless Commission.

Among the survey's findings:

The statistics reveal a deteriorating quality of life for most of Denver's homeless since the ban passed. "That's a key finding," Robinson said. "There was a reason people were sleeping on 16th Street before (the law). It was safe, well lit and patrolled by police. This law has changed all that."

Camping ban supporters said the ban would improve the quality of life for the homeless by connecting them with health alternatives. Ban enforcement follows a series of steps: 1) determining if there are other violations that the camper should be cited for; 2) issuing the violator an oral warning to quit covering themselves, and/or to "move along"; 3) issuing a written warning; 4) attempting to connect the homeless person to services before arrest.

However, the latter step of intervention rarely occurs, the study found. Instead, the ordinance criminalizes activities necessary for survival, without providing alternatives.

"They're just spending their time in constant motion," Robinson said of the homeless. "Some of them are trying to get into shelters, but 75 percent say they've been turned away frequently because of lack of space."

The U.S. Interagency Council on Homelessness has singled out these types of law as being cruel and counterproductive, Robinson said.

"We know there will be hundreds of homeless out there tonight, so we either turn our heads and pretend they're not there -- being forced to make the impossible choice between shelter or criminality -- or we admit the reality and find a clean, safe place where our residents can live with us," he said.

Faculty Council moving to boost diversity among its leadership ranks

Systemwide Campus and Workplace Culture Survey to launch in fall

To safely return to ‘normal,’ 70% of Coloradans must get COVID vaccine

Faculty Council moving to boost diversity among its leadership ranks

To safely return to ‘normal,’ 70% of Coloradans must get COVID vaccine

Systemwide Campus and Workplace Culture Survey to launch in fall

Send your thoughts and suggestions for the Newsletter.
END_OF_DOCUMENT_TOKEN_TO_BE_REPLACED