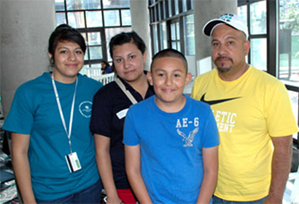 Until she participated in the Summer Olympiad, Hinkley High School senior Annie Ngo had never competed in speech.

Not only did she compete, but her team took first place in the "extemporaneous speaking" event on June 22. More than 300 Colorado high school students tested their academic and athletics skills at the Auraria Campus as part of the University of Colorado Pre-Collegiate Development Program Summer Olympiad.

"It's really encouraging because you see other students working really hard," said Ngo, wearing a gray T-shirt and representing the Anschutz Medical Campus. "It's also really fun. It's an awesome thing to do. This program gives me a lot of opportunities I can use for my senior year of high school."

Creating opportunity is the primary goal of CU's Pre-Collegiate Development Program, which celebrates its 25th anniversary this year. Each campus's program prepares and motivates prospective first-generation college students to pursue a postsecondary education. Systemwide, the programs serve 24 school districts and 108 middle and high school on the Front Range.

Bruce Ahn, wearing a CU Denver blue T-shirt, was part of the extemporaneous speaking team that included Ngo, Adrian Luna (University of Colorado-Boulder, turquoise shirt) and Brianna Anderson (University of Colorado-Colorado Springs, pink shirt). Ahn delivered the winning speech on the topic of "the importance of education and how it relates to people who don't have the opportunity." He said the pre-collegiate program has given him the academic challenges and confidence to "jump right into my senior year" and finish college preparations.

Larry Armenta, director of CU Denver | Anschutz Medical Campus Center for Pre-Collegiate Programs, said the annual Summer Olympiad has taken a different approach in recent years. Instead of having students from the various Pre-Collegiate Programs compete against one another, now each team is made up of students from each of the programs. "The whole idea is to learn to collaborate and to form partnerships, instead of pitting 'us' against 'them,'" Armenta said.

Armenta said the academic enhancement programs, which start at the middle-school level, firstly prepare students to graduate from high school and, secondly, ensure they have the credentials to go to college. Most students graduate with a head start on college credits. Many program participants choose to attend the University of Colorado, he said, but the main objective is simply that they go to college.

As first-generation prospective postsecondary students, the participants "don't have role models who they've seen going on to college, Armenta said. "We really show them how and teach them how to get to college, to make sure they have the academic credentials."

Olympiad participants said they won't be surprised by the workload and other challenges of university life. Gaby Crespo spent several years in the CU-Boulder Pre-Collegiate Development Program -- first as a participant and now as a work-study staff member. "If it wasn't for this program, I think my college career would have gone a different way," said Crespo, who will be a senior in architecture at CU-Boulder this fall.

She learned about scholarships, grants and other opportunities through the program. "Some parents, along with my parents, don't know very much about college and how to get started in college," Crespo said. "So this program really filled in those areas."

Now her sister, Lupita, a senior at Skyline High School in Longmont, is participating in the CU-Boulder Pre-Collegiate Development Program and her middle-school brother, Jose, will likely be the next sibling in the pipeline.

Carmen Crespo, their father, watched his daughters compete and work at the Summer Olympiad.

"It feels good that they're doing this," he said. "It's important to have opportunities and be prepared for the future."

A summer steeped in STEM for high school juniors

Send your thoughts and suggestions for the Newsletter.
END_OF_DOCUMENT_TOKEN_TO_BE_REPLACED