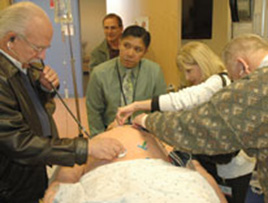 Joey Failma, simulation director for the Center for Advancing Professional Excellence at the Anschutz Medical Campus, watches as members of the South Metro Chamber of Commerce listen through stethoscopes to the internal organs of a lifelike mannequin.

John Brackney, president and CEO of the South Metro Denver Chamber of Commerce, says it’s hard to appreciate the magnitude of the Anschutz Medical Campus until you step foot on the massive Aurora campus.

“On Highway 225 and Colfax, we pass this but we have no understanding,” he says after taking a tour of the Center for Advancing Professional Excellence. “Most business people don't understand how significant and how detailed, how extensive and how much money and how much space is here. It’s just outstanding to see from the old Army hospital to the new training facilities, with all the high-tech stuff. It’s just a really impressive campus. We are thrilled to see it here.”

About 40 leaders of the South Metro Denver Chamber toured the Anschutz Medical Campus on Dec. 14. It was one of a series of open houses the still-growing campus – when the nearby VA Hospital is complete in 2015 it will represent $3.8 billion in construction – that has taken place at the campus in recent months.

he impact of the campus – in clinical care, research, education, community service and, soon, wellness – can’t be understated, says Lilly Marks, executive vice chancellor of the Anschutz Medical Campus and vice president for health affairs for the CU system, as she spoke to the group during lunch.

After she explained the campus’s high rankings in research dollars and stellar rankings of various medical programs, Marks says, “This has become one of the meccas for health care in Colorado. We have two incredible hospitals on the site. ... We have some of the best clinical facilities in the country right now.”

But the challenges for health care are many, including a predicted shortage of 90,000 physicians nationally by 2020.

“Within the constraints of capacity we have and within the financial constraints we have, we're doing everything we can on this campus to increase our through-put, or creation, of health care workers and health care professionals,” she says.

Given that she was speaking to a group of business leaders, Marks geared many remarks to the campus’s economic impact. She notes that 17,000 direct jobs have been created in the last decade, and several thousand more will be generated with the Children’s Hospital Colorado and University of Colorado Hospital expansions and the nearby VA facility.

Marks told the group that the Anschutz Medical Campus has a direct economic impact of $2.4 billion. Adding an economic multiplier to that, the impact is well over $4.5 billion.

“This is an extraordinary economic engine for our state in addition to what we provide in terms of services and education,” Marks says.

She notes that the “next frontier” includes the discoveries emerging from the campus’s research labs. Anschutz Medical Campus is working to become a leader in translating research into new drugs, devices and businesses. Just last year, the campus filed 123 patents, resulting in three startup companies; the average is five to seven startups a year.

“There’s a lot coming out of this campus and the research that’s done here,” Marks says. “We've just begun to recognize that potential.”

The South Metro Chamber group broke into smaller groups and toured CAPE, a premier health simulation facility; took a virtual tour of the human body courtesy of CU researchers who have replicated slicing a body into 0.1 millimeter slices; and walked through the soon-to-open Anschutz Health and Wellness Center.

“We are just really pleased that we are here today,” Brackney says. “We all have a role and we have a role to support CU, CU Denver and the Anschutz Medical Campus in a big way.”

Send your thoughts and suggestions for the Newsletter.
END_OF_DOCUMENT_TOKEN_TO_BE_REPLACED