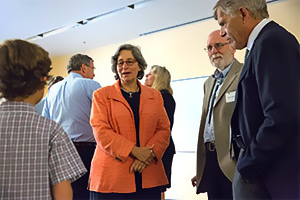 Back in the 1970s, grassroots environmentalism in the United States kick-started the movement against chlorofluorocarbons, leading to "an amazing story of science, people and society" and their capacity to solve a major global problem.

That was a message delivered by Massachusetts Institute of Technology Professor Susan Solomon, Ph.D., the inaugural speaker in the Chancellor's Distinguished Lecture Series at CU Denver. The event drew about 200 people to the large lecture auditorium in the new Student Commons Building Sept. 17.

Solomon, selected by Time Magazine as one of the Most 100 Influential People in the world in 2008, spoke on "Ozone Depletion at the Ends of the Earth: A Science and Policy Success Story."

Chancellor Don Elliman thanked Bob Damrauer, Ph.D., CU Denver associate vice chancellor for research, and his wife, Lennie, for establishing the Damrauer Endowed Lectureship Fund that created the annual, free lecture series that focuses on topics of broad appeal in STEM (Sciences, Technology, Engineering and Mathematics) disciplines. "We're enormously grateful ... and excited for the first in what we hope will be a long series of interesting and stimulating lectures that, frankly, help us not only connect this university to our student body, faculty and staff in a different way, but also to our community, because ultimately that is the role of an urban-serving university," Elliman said.

Elliman noted that Solomon has the distinction of having a glacier named for her in Antarctica, where she led a team of researchers in 1986-87 who pioneered the theory that explained why the ozone hole occurs over Antarctica.

In the mid-1980s, Solomon said, scientists postulated that there would be a 3 percent to 5 percent depletion of stratospheric ozone by about 2100 if humans continued using chlorofluorocarbons at the then-current rates. But her team discovered that the chlorofluorocarbons combined with polar-stratospheric clouds to greatly speed up the depletion. Left unchecked, "the amount of ozone depletion around the world would have been huge." Global public health would have been seriously impacted since skin cancer, eye disease and other illnesses are caused by ultraviolet light.

The concern led the United Nations in 1987 to create the Montreal Protocol, which phased out the emission of chlorofluorocarbons. By 1999, Solomon said, all the nations of the world, including China and India, agreed to ultimately phase out all emissions of the harmful chemical.

Solomon quizzed the audience, especially those under age 30, asking which country was pushing strongest for the end of emissions. She also asked which nation was the most skeptical of the science and, lastly, which nation based its tactics on self-serving data and the conventions of large industry. While many in the audience thought the United States was the latter, Solomon said America, along with allies including Sweden, Norway, Canada and Japan, was the strongest backer of a legally binding protocol. The United Kingdom was skeptical of the theory, while France and Germany were the nations concerned about the thoughts of big business.

"People find it difficult to imagine the U.S. being a global leader on a U.N. environmental treaty, because it's been a while since that happened," Solomon said. "But it's not impossible."

She said the U.S. developed a nascent, but powerful, environmental movement in the 1970s. "It basically kicked the wind out of the sails of these molecules as products," she said. "It made what had been a really good business—growing at a clip of about 7 percent a year—into a very bad business in the United States. Suddenly, the chemical companies had overcapacity."

So, Solomon said, science teamed with consumer sentiment to allow the United States to create the initial push to phase out chlorofluorocarbons. "In the end, I like to say it took a village," she said. "The science mattered, the (chemical) fingerprints were powerful and everyone could understand them, and the issue was personal and perceptible." People realized there were easy lifestyle changes they could make, such as using roll-on deodorant instead of sprays, to help the environment.

"Certainly, societies can talk a lot about the importance of having great science—it is very important—but even more important is the public understanding and the public interest in solving problems," Solomon said. "That can move mountains."

She said that, thanks to the effects of the Montreal Protocol, a backslide on chlorofluorocarbon emissions is unlikely. "The atmosphere is already starting to heal, which is pretty cool—we did that." She added that it will take many decades longer for the harmful molecules already emitted to the atmosphere to fully decay.

Solomon noted that the next mountain that needs to be moved is climate change, which is rooted in carbon dioxide emissions and their connection to fossil fuels. Solomon chaired the Intergovernmental Panel on Climate Change 2002-07, during which time the IPCC won the Nobel Prize for its work. Solomon was formerly the head of the Chemistry and Climate Processes Group of the National Oceanic and Atmospheric Administration based in Boulder.

"It's pretty clear that what we need (to stem climate change) is engineering and innovation, which has to pave the way, just as it did with chlorofluorocarbons." She said the choices in attacking the problem are either top-down emissions policies or a bottom-up technology policy.

While it's great for individuals to reduce their carbon footprint, that alone won't solve the problem, Solomon said.

"There are policies government can do, but what will solve the problem is technology," she said. "Somehow we have to make that connection. I think it will only happen through social media and the involvement of young people."

Solomon's full lecture was recorded and will soon be posted on the Chancellor's Distinguished Lecture web page.

Send your thoughts and suggestions for the Newsletter.
END_OF_DOCUMENT_TOKEN_TO_BE_REPLACED