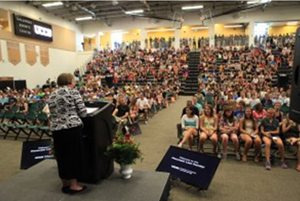 Chancellor Pam Shockley-Zalabak told the members of the Class of 2017 to embrace uncertainty during Freshman Convocation Aug. 21.

In a departure from recent years, Shockley-Zalabak took the podium to address the record-breaking freshman class and a sprinkling of parents. In a 20-minute address, she cited statistics, shared personal anecdotes, and quotations from both famous and obscure philosophers, all in an effort to combine serious messages with fun.

“One of my favorite philosophers – NHL great Wayne Gretzky – said: ‘You miss 100 percent of the shots you never take,’” Shockley-Zalabak said. “In other words, not risking may be safe but also produces less in potential opportunity.”

Shockley-Zalabak encouraged the students to make no small plans and to embrace uncertainty, sharing her own challenges of losing a parent while a teenager, her husband later in life, and drawing more than a few smiles when she explained her selection of a college major.

“The line for undecided majors was really, really long,” Shockley-Zalabak said of her undergraduate enrollment experience. “The line for communication majors was shorter so I picked it.”

Students heard examples of successful UCCS alumni, wrote their dreams on a notecard, and later placed the cards on five-foot-tall UCCS block letters on the pedestrian spine lined with applauding faculty and staff members. Everyone received sunglasses, in part to block the afternoon sun but also to highlight the bright futures ahead. 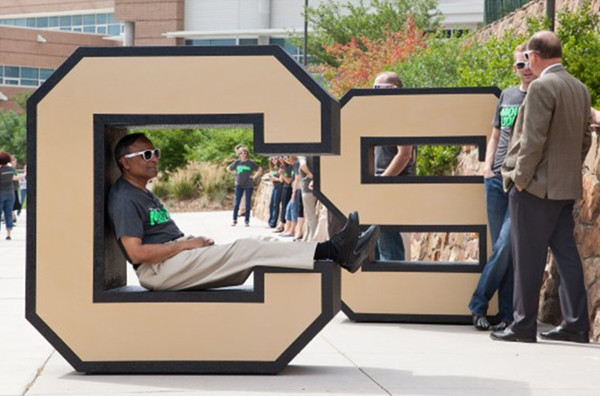 Giant U-C-C-S letters lined the Spine. Students were asked to write their goals on a sticker to place on the letters R. “Dan” Dandapani, dean of the College of Engineering and Applied Science, lounges in the second “C”