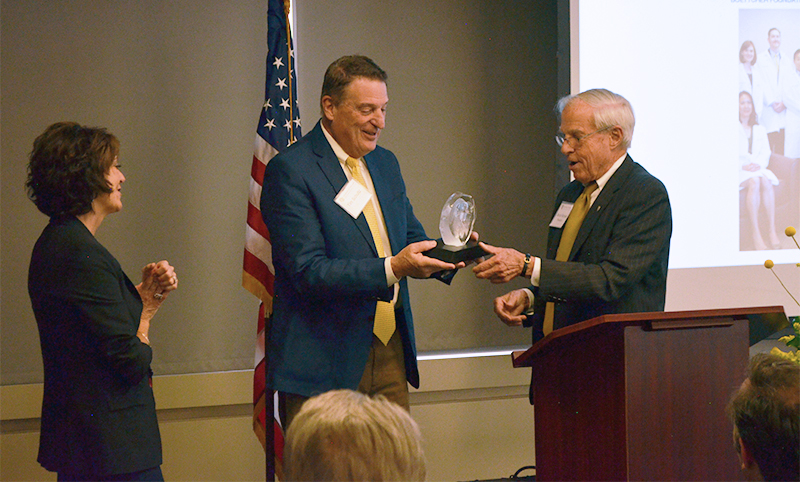 The University of Colorado this week celebrated its partnership with the Boettcher Foundation – the Boettcher Webb-Waring Biomedical Research Award program – with an appreciation lunch at 1800 Grant St.

Dozens of current and former CU staff, Boettcher Foundation staff and trustees, the award selection panel and others who have been instrumental in the thriving program’s eighth year gathered Tuesday for the event. 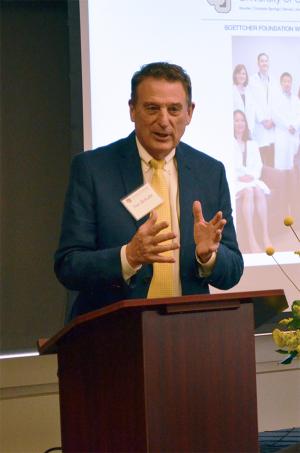 Tim Schultz is in his final year as president of the Boettcher Foundation.

Tim Schultz, who is marking his final year as president of the Boettcher Foundation, received special thanks from CU President Bruce Benson, who presented Schultz with a crystal buffalo as a token of the university’s appreciation. Schultz played a key role in the program’s creation and oversight.

The intent of the program is to fund meritorious research that has the potential for new discoveries or advances a discovery to the proof of its potential value as an application to improve human health. This research will improve the understanding, treatment, and prevention of human disease. 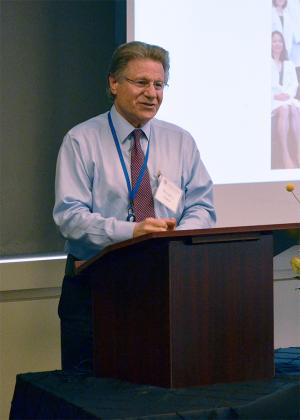 Besides President Bruce and Marcy Benson, guests at Tuesday’s lunch included the selection panel’s chair, Ron Sokol, M.D., a faculty member at the University of Colorado School of Medicine at the Anschutz Medical Campus, and the other panelists, who are faculty members at CU Anschutz, CU Denver and CU Boulder. Boettcher Foundation Trustees who attended included Pam Shockley-Zalabak, chancellor emerita of UCCS. 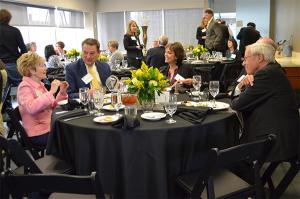 Leading off the lunch program was a video highlighting the awards program’s mission. 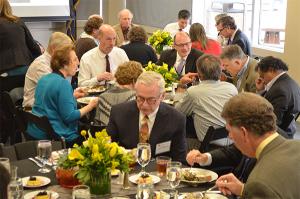 Recipients of Webb-Waring Biomedical Research Awards, or Boettcher Investigators, are awarded research grants of $235,000, covering up to three years of biomedical research. The grants help Boettcher Investigators establish themselves and their research. As a result, they become competitive for major awards from federal agencies and private sources. By funding researchers at this critical juncture, the Boettcher Foundation seeks to keep promising research on track and ensure that Colorado’s best scientific minds are not compelled to leave the state in search of funding.

To date, CU’s 28 Boettcher Investigators have been awarded nearly $6.5 million via the 2010-2016 programs. For this competitive program, the peer review process for CU applications is managed by the Office of the President.

The 2017 class of Boettcher Investigators will be announced in June.