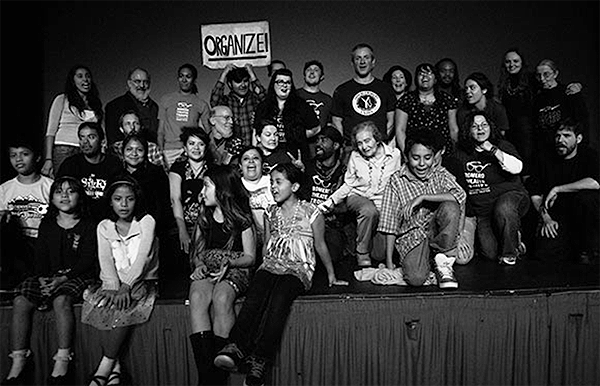 Outside his Immigration Politics class, senior instructor James Walsh, Ph.D., stands in a huddle with five of his students and hands one of them an extraterrestrial mask—a last-minute prop for the play they are about to perform.

"Is everyone OK?" Walsh asks his students. They nod. "We had fun practicing," he says. "Now let's have fun performing."

This play tells the story of the first immigrant to resist deportation by living in sanctuary in a local church. The performance is free, but donations will be accepted at the door to benefit Arturo Garcia Hernandez and the Metro Denver Sanctuary Coalition.

The students lead the way into the classroom and begin their performance, a short play they have written, inspired by the book they're reading in class. The play presents a girl of Mexican heritage debating whether she should work for U.S. Border Patrol. Costumed as an old man, Walsh joins his students in the play as the girl's father, urging her to choose her culture over the job. At first, the class laughs when one of the performers dons the extraterrestrial mask and pulls the girl away from the Border Patrol recruiter. But the students quickly realize that the mask is the play's way of challenging some people's view of immigrants. The students may laugh, but they are learning.

This is a normal day in Walsh's classroom. When Walsh started teaching at CU Denver 17 years ago, he didn't think he was doing enough to help students digest and understand the real-world implications of his coursework. So, 14 years ago, he decided to reinvent his classroom in a way that would inspire his students and encourage active learning. He decided to do it with theater. 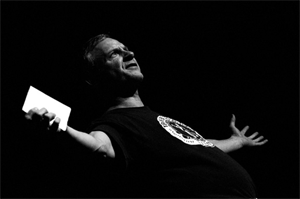 When Walsh replaced traditional lectures with group skits written by students and swapped textbooks for literature, poetry and memoirs, he immediately noticed a difference. The number of students doing their reading shot up, and students who had been quiet all semester suddenly came to life when the performances began.

"The plays allow student-on-student teaching moments," Walsh says. "Just like with writing research papers, when creating a play you have to interpret the data, really understand it. My students research political science topics, create a representation of that information, and make it accessible for their classmates through performance and discussion. It's beautiful."

Walsh allows his students to invite him to participate in their performances (he says he never asks his students to do anything he won't do himself), which often reverses the teacher-student role familiar to most students. For the weeks spent developing the play, the students are the ones doing the directing, the teaching, and Walsh happily accepts whatever role they assign him.

This kind of active learning is clearly working. When Walsh runs into former students around Denver, they always ask if he remembers their play.

By 2005, Walsh knew he had a good thing going. If it works so well in the classroom, he thought, what about the community? Then, the Romero Theater Troupe was born. 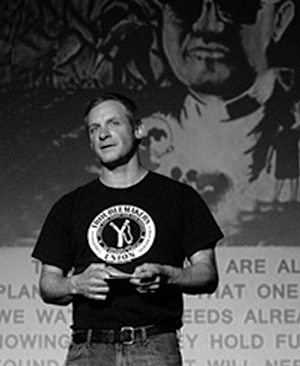 This Spring, Walsh was awarded CU Denver's Rosa Parks Diversity Award for his work educating the public with the Romero Troupe, an "organic," all-volunteer, not-for-profit theater group. They are not actors in the traditional sense. They are community members—moms, immigrants, students—joining together to bring social justice issues to light.

The first story the Romero Troupe told was Oscar Romero's, a bishop from El Salvador murdered for his social activism. After telling his story, they adopted his name.

"His mission was to speak truth to power," Walsh says. "That's our mission too."

Like the performances in Walsh's classroom, the Romero performances are raw. There are no auditions, no formal directors and rarely more than one full rehearsal before a performance. But that model is working. The average lifespan of a new theater company is three years. The Romero Troupe is in year 10.

The troupe is not officially connected to CU Denver ("we don't belong to an institution. We belong to the community"), but its roots are in Walsh's classroom and about half the members are CU Denver students or alumni.

Vera Schaffer is one Romero member who started in Walsh's classroom. She says she will never forget the first day of class when Walsh came into the room dressed as an Irish miner and, instead of giving the normal first-day-of-class lecture, delivered a monologue about the struggles of the mines. That lesson stuck with her, so when offered the opportunity to keep working with Walsh, she took it.

"It teaches me to be more mindful of people who are suffering," Schaffer says. "That's a worthy cause."

Walsh admits he had no idea what he was doing when he decided to begin a theater troupe, so he began with the people he did know—his students. He called former students who had loved acting, and asked if they were interested in community performances. Almost all of them were.

From that first group of students, the troupe has grown from seven to 75 active members who span every decade. The oldest member is 91, and the youngest is in elementary school, which means everyone has a unique perspective to bring to the stage.

"Romero members are from the community," Walsh says. "They're the ones that the stories are about. They're immigrants, veterans, educators telling their stories. They're real, and that gives them an amazing authenticity on stage. Audiences hunger for that kind of organic theater without outside additives. Our theater is grown right from our own soil—from our heart of hearts."

The troupe's mission is to build community members up and help them find their voices, which they do both through workshops across the city and by spontaneously inviting audience members on stage to share their experience of the story just related in the play. In the last year, the Romero Troupe has invited military veterans to share their experiences of reintegrating into society, homeless women to act out their own struggles, and immigrants to tell stories of separation and deportation.

The Romero Troupe has tapped into something important—a way to challenge traditional theater, enhance academia and build community. This year, they have been drawing audiences of 200 to 400 people and donating all the profits to other organizations doing social work in Denver. They are providing the space for people to bring their own buried stories to the surface, and giving a voice to the voiceless. For Walsh, the Romero Troupe is a dream come true.

"It's every academic's dream to not just be effective with students, but to actually impact the community," he says.

Still, 30 years ago, if he had been told he would make his impact with theater, Walsh wouldn't have believed it. He still has a clear memory of his first encounter with theater in college when, drawn by voices, he stumbled on a thespian meeting. The door closed, Walsh stood outside the room and listened to the voices inside, but he never opened the door. Now, years later, with a troupe practicing for another set of stories about education reform, Walsh says he has finally opened that door.

"I think that's what all this is," Walsh says, "the drama in the classroom, the Romero Troupe—it's all a way of opening that door that I didn't open all those years ago. Now, it's about opening the door to my students and my community so they can hear these stories. After all, if we don't tell them, who will?"

Send your thoughts and suggestions for the Newsletter.
END_OF_DOCUMENT_TOKEN_TO_BE_REPLACED