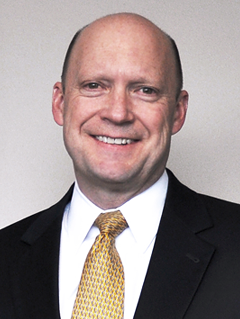 The University of Colorado Foundation has named Richard W. Lawrence as its new president and chief executive officer following a national search, the Foundation’s board of directors announced Friday.

Lawrence, a six-year CU Foundation veteran who most recently has served as chief operating officer and executive vice president, assumes the role effective immediately. He replaces retiring CEO J. Wayne Hutchens, who will remain through April 1 to assist the transition, and who with Lawrence has led the CU Foundation to its five most successful fundraising years ever.

Lawrence, 54, brings to the role a track record of efficient and effective management, strong university and donor relationships, and a comprehensive understanding of the foundation’s operations. He will oversee a staff of 200, CU endowments of approximately $750 million, and annual fundraising exceeding $100 million. He is a 1980 alumnus of the University of Colorado Boulder.

“We had an extraordinarily strong pool of applicants, yet our committee was united in believing that Lawrence was the ideal candidate for this critical role,” said Margaret Bathgate, chair of the CEO search committee that selected Lawrence from a pool of 98 candidates. “In addition to his clear capabilities, passion and vision, CU Foundation stakeholders and staff have trust and confidence in him, which will be an invaluable asset as we progress toward our goals for the $1.5 billion Creating Futures campaign.”

Said CU President Bruce D. Benson, “Rick Lawrence has been instrumental in building the organizational structure that has led the CU Foundation toward fundraising success. I have every confidence in his ability to step into this leadership role and advance the CU Foundation’s ability to attract the private support that adds value to people, programs and places at the University of Colorado.”

Lawrence has played a fundamental role in the strategic planning for the Creating Futures campaign, which has generated $1.1 billion in private support for CU since it began July 1, 2006. Guided by 30 prior years of executive experience at Vectra Bank and Bank One Corporation, Lawrence has helped lead evolutions in the foundation’s investment management and real estate foundation structures, and has negotiated critical donor and university-partner arrangements.

“Rick Lawrence has demonstrated outstanding strategic vision in our six years working together at the CU Foundation, and our staff has strong confidence in his leadership,” said Wayne Hutchens, who had been foundation CEO since 2006. “CU donors, alumni and friends can be confident that the foundation is in capable hands.”

Beyond the CU Foundation, Lawrence is president of the board of directors of Peak to Peak Charter School in Lafayette, and has served on boards of community and industry organizations such as the Boulder Chamber of Commerce, the Boulder Downtown Management Commission and the Colorado Bankers Association, among others.

Besides his CU degree, Lawrence is a 1988 graduate of the ABA Stonier Graduate School of Banking. His wife, Barbara, received a 1996 graduate degree from CU, and together they have two children.