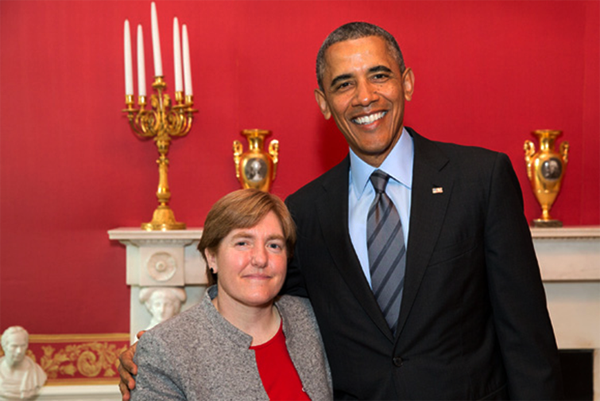 When Dawn Comstock, Ph.D., met President Barack Obama in May, the White House gave her three rules: no selfies, no hands in pants pockets, and absolutely no touching the president except to shake his hand.

Then the president came in, thanked Comstock for the work she’s doing to keep high school athletes safe and put his arm around her for a picture. “No matter what the rules are,” Comstock says, “when the president hugs you, you hug him back.”

Comstock, associate professor of epidemiology at the Colorado School of Public Health, was one of five experts invited by the White House to speak at the Healthy Kids and Safe Sports Concussion Summit to address the growing risk of concussions in adolescent sports. For years, Comstock has made it her personal mission to make sports safer for the country’s teens by researching sports injuries across the country. According to the president, she’s accomplishing that mission.

When Comstock started in the sports injury field 10 years ago, it was common to hear coaches, parents, even policy makers say things like “injuries are the price you pay to play” or “it’s just part of the game.” Comstock disagreed. She knew injuries were preventable.

She noticed that there was plenty of information about professional and collegiate sports injuries, but there was no data available for high school sports. With 7.7 million students playing high school sponsored sports in the United States, Comstock knew this was an information gap that needed to be filled. So in 2004, with just a $100,000 one-year grant, she set out to fill it.

When High School RIO started, Comstock was collecting data about nine popular sports with relatively high risk of injury (football, girl’s and boy’s soccer, girl’s and boy’s basketball, girl’s volleyball, wrestling, baseball and softball) from 100 randomly selected high schools. Last year, less than 10 years after its inception, it collected data from 22 sports and 280 high schools across the country. In just nine years, Comstock has created the largest data set that has ever been recorded about high school athletes with over 60,000 injury case reports in her database.

Before her data, policymakers and clinicians had to make decisions about the rules and protective equipment of high school sports based on data from adult athletes. But Comstock knew that wasn’t enough. High school athletes aren’t just miniature versions of their adult counterparts. Their joints aren’t fully developed; their brains aren’t fully developed; they’re bio-physiologically different, which means their injury risk factors may be different and they may need their injuries managed differently. It means sometimes the game needs to change to keep them safe.

Comstock says it’s never her job to tell anyone that a change in sports rules or practices is a good idea or not. Instead, she provides the data and lets schools and policymakers make more informed decisions for themselves just like they did with the National Federation of State High School Associations’s (NFHS) kickoff debate. In 2010, the NFHS was considering moving high school football’s official point of kickoff farther back from the 50-yard line to match professional and collegiate football practices. Comstock was asked to provide data to those discussing this policy change.

High School RIO has initiated a complete shift in sports rule-making culture. Traditionally, decisions about adolescent sports rules were made based on anecdotal evidence, emotion, and funding concerns. Now they are based on facts. Policymakers like the NFHS are now inviting Comstock to help them decide the future of high school sports, using her data to fuel an evidence-based safety discussion. In the last few years alone, these evidence-based discussions have led to new mandatory protective eyewear for every girl’s field hockey team in the country, new recommendations about limitations of player-to-player contact in football practices, and discussions of mandatory helmets for girl’s lacrosse. It’s no wonder the White House is paying attention.

Comstock knows that her research has the potential to scare parents and athletes away from participating in the potentially dangerous sports world. But Comstock says that’s not the point. She set out to create this data set so that more informed decisions could be made to keep young athletes safe, not to scare young athletes off the field. Comstock knows the facts better than anyone, and it hasn’t stopped her from playing.

Comstock was a high school athlete (the only 4-foot 11-inch volleyball and basketball player on the court). Since high school, every place she has moved for school or work, she has tried a new sport—rugby in Colorado, judo in Iowa, surfing in California and fencing in Oklahoma. At the age of 40 she played soccer for the first time in Ohio and learned how to curl. Comstock loves sports too much to let injuries keep people from experiencing them.

Now, with victories behind her and challenges ahead, Comstock hopes to stabilize and expand High School RIO so more people can safely play on. She hopes to link High School RIO to the National Collegiate Athletic Association’s injury database to begin tracking concussion histories across the lifespan of any given athlete, and she wants to continue to draw attention to America’s obesity epidemic and the need to keep our young people active.

Comstock is proud of the work she has done and is happy to be helping the world become a safer place for kids like her nieces and nephews to play. She wants them to play sports just like she did, and she doesn’t want them to be afraid to do that. But Comstock’s nieces and nephews, ages 4 to 10, have highlighted another gap in the literature—younger children.

There is still no middle school or elementary school specific sports injury data, and Comstock wants to remedy that next. Looking at her nieces and nephews, Comstock knows that when it comes to keeping kids safe, you can never start too young.​