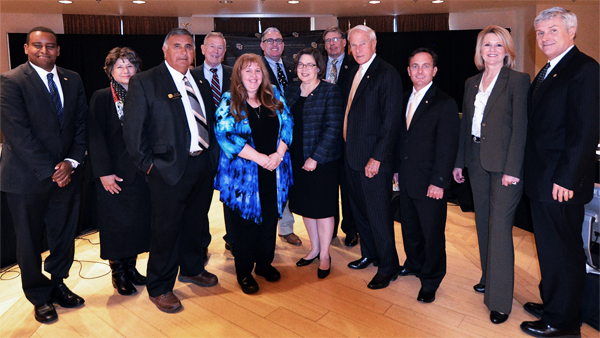 The board passed a resolution of appreciation honoring Melinda Piket-May for her recently concluded two years as chair of the CU Faculty Council. (Photo: Cathy Beuten/University of Colorado) 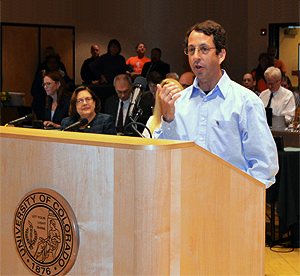 CU-Boulder physics professor Steven Pollock last fall was named a 2013 U.S. Professor of the Year by the Carnegie Foundation for the Advancement of Teaching and the Council for Advancement and Support of Education. The regents recognized him for the honor, and thanked him for his service to the university. Pollock, a CU President’s Teaching Scholar, spoke briefly and gave a presentation on his research in the best ways of teaching physics.

Said Kyle Hybl, board chair, “World-class faculty like you and your colleagues clearly have the opportunity to teach and do research anywhere, so thank you for being at the University of Colorado.”

The board also passed a resolution of appreciation honoring Melinda Piket-May for her recently concluded two years as chair of the CU Faculty Council. Current council Chair Laura Borgelt thanked her predecessor for her hard work and commitment to shared governance. “Melinda has been a fantastic leader, mentor and inspiration,” she told the board.

Piket-May thanked the board for working with her collaboratively. “Regent (Michael) Carrigan once said that shared governance is a two-way street,” she said. “That’s something important for everyone to keep in mind.”

Also during the Sept. 11 meeting, Regent James Geddes made a motion to the board asking for the evaluation of CU’s hiring practices to create candidate pools that reflect diversity of political, geographic, intellectual and philosophical perspectives. He asked that the board restate its commitment that the CU will refrain from discrimination in all of its hiring practices for promoting the rich interchange of ideas consistent with the concepts of diversity endorsed by the United States Supreme Court. The motion failed because of a lack of a second.

The regents also have announced that they are soliciting nominations for their 2015 Honorary Degrees, University Medals and Distinguished Service Awards. From the board:

For more information and to download award nomination forms, please go to:  https://www.cu.edu/regents/Awards/.  If you would like hard copies of the forms sent to you, please call the Board of Regents office at 303-860-5743.

Tagged with:
awards, Board of Regents, President's Teaching Scholars Program