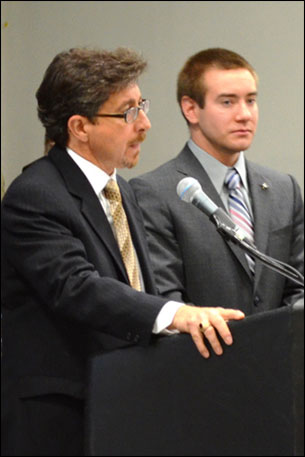 Frank Bruno, vice chancellor for administration at CU-Boulder, left, and Bruce Deakyne, student chair of the recreation center board, speak to the CU Board of Regents at today's meeting. [Photo: Cathy Beuten/University of Colorado

The CU Board of Regents today voted to approve the $63.5 million package of improvements to the University of Colorado Boulder recreation center, which students overwhelmingly requested earlier this year.

Steep fees for the center expansion and renovation – which will be about $96 per student per semester this coming school year, and $206 per semester in 2014-15 – had caused concern about the project among board members.

Bruce Deakyne, student chair of the recreation center board, spoke and answered questions about the plan, stressing the high voter turnout and wide margin of victory that students achieved, and said the center serves a vital community-building role on the campus.

Regent Monisha Merchant, D-Lakewood, said she appreciated that the project "is 100 percent student-focused."

Regents Joe Neguse, D-Boulder, and Stephen Ludwig, D-Lone Tree, expressed reservations about the plan to include an outdoor pool and possibly hot tubs, given that such a facility's use would be limited during the academic year.

Deakyne said that an outdoor pool and deck area ranked third in importance among focus groups, who put only a weight and cardio area and parking ahead of it.

Regent Tilman "Tillie" Bishop, R-Grand Junction, said he commended the students, staff and Vice Chancellor for Administration Frank Bruno for their work on advancing the project, and said that the pool area is understandably part of what students voted to support.

"It reminds me of the same things the senior citizens did in Fruita, Colo., when they had to put together a package designed to get the most support they could get," he said. "Yeah, it's going to be expensive, but I don't know what we do today that doesn't have an expense."

Regent Sue Sharkey, R-Windsor, said she also had concerns about the cost, but that the existing building is inadequate. She asked whether revenue might be generated at an outdoor pool with summer swim camps; Bruno said that was likely.

In other action at the two-day meeting, which concluded today, at the University of Colorado Colorado Springs:

The board voted to add a new regent policy requiring that campuses provide twice-yearly reports to the board on student disciplinary suspensions and expulsions. The proposed change was introduced by Regent James Geddes, R-Sedalia, as chair of the laws and policies committee.

"This has been a group effort to construct this language," said Geddes, who thanked regents Michael Carrigan, D-Denver; and Steve Bosley, R-Broomfield; as well as Professor R L Widmann and Intercampus Student Forum Chair Jack Kroll.

When the matter was discussed at the Laws and Policies Committee meeting in April, Kroll had objected to the idea of the board reviewing suspensions and expulsions, saying that current reviews by administration, faculty, staff and fellow students should be sufficient.

But at Tuesday's meeting, Kroll said he had spoken with disciplinary officers at CU Denver and they said they would prefer to be able to present such reports to the regents, so he withdrew his objection.

A proposal for a new doctoral degree in engineering and applied science at CU Denver was defeated in a 4-4 vote. Regents Geddes, Merchant, Neguse and Sharkey voted against it; Ludwig did not attend on Tuesday and did not vote. Neguse said he had concerns about potential cost of the new program, and cited the economy as a reason for not adding new degree programs.

The board discussed differentiated workloads for faculty, having asked for reports from the campuses. Provosts indicated that faculty generally follow the 40/40/20 breakdown of teaching, research and service, but that the current economic climate often is leading schools to add to the teaching load.

The board issued resolutions of appreciation to Kroll and Staff Council Co-Chairs Miranda Carbaugh and Lori Krug, whose terms are ending.

Regent Kyle Hybl, R-Colorado Springs, was re-elected as chairman for the coming year; Carrigan was elected vice chairman. The board thanked Ludwig for his past year of service as vice chairman.