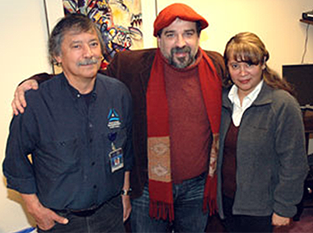 Andres Lema-Hincapie's work in the Department of Modern Languages is about opening doors -- to language, to culture, to art.

So it's not surprising that he turned his attention to the custodial staff in the Plaza Building where he teaches. He noticed that the janitors are part of the university, yet are also far apart from it, mainly because of language barriers.

Lema-Hincapie, Ph.D., a Colombia native, wants to expose them to what the university is about. He wants to open the door. Welcome them in.

He applied for a CU System Diversity and Excellence Grant for a project titled, “Including Our Housekeepers: Basic Computers, Written Spanish/English, Great World Cinema."

"I'd like to see them acclimate to be part of this cultural and knowledge adventure, which is the university," Lema-Hincapie said. "Because I think by cleaning restrooms and mopping floors, this is not the only way to be part of this community. This is a community of learning and doing research."

His proposal was one of eight selected for funding at the University of Colorado Denver | Anschutz Medical Campus for 2012-13. "Including Our Housekeepers" won a $2,995 grant and, using volunteer teachers, will instruct a group of 10 housekeepers on computers, written English and Spanish and classic cinema over a 16-week period.

"Imagine the housekeepers going to a place they usually clean up -- the Auraria Library -- but this time they are not going to clean it, they are going to learn," he said. "They are going to be part of this learning entity."

Lema-Hincapie's evening classes in the Plaza coincide with the custodians' work shifts. They often include the assistant professor in their meal break time. "I like the company of these marvelous people, but I don't like their spicy food," he said with a laugh.

A visit with one custodian in particular sparked an idea in Lema-Hincapie. The man said he'd bought a laptop for his daughter and wanted to be able to use the computer. Lema-Hincapie put the man in touch with a Modern Languages student, Harold Kleeman, who is handy with computers. It ended up being a symbiotic relationship -- the custodian expanded the student's knowledge of Spanish, while for a short period of time the student taught the man computer 101.

Similarly, the project will pair volunteer teachers one-on-one with housekeepers. During weekly 90-minute sessions at Auraria Library, the custodians will receive 30 minutes of instruction each in computers (brought by the teachers), written English and written Spanish. They won't be the only ones learning, Lema-Hincapie said. "The volunteers are teaching someone, but at the same time they are learning how to teach. They are going to face some unusual situations."

They will be responsible for completing regular online exercises with an exercise tutor outside Denver. Once a month, they will be encouraged to invite friends and family to a screening of a classic film at the library.

Olga Gavara, a Modern Languages graduate student, will coordinate the project. Monica Fullmer Bautista, who earned a bachelor's degree in anthropology from CU Denver, is now working on a master's in public health at the Colorado School of Public Health at the CU Anschutz Medical Campus. If Bautista is successful in getting the "Including Our Housekeepers" project accepted as the practicum for her master's studies, it would enable the project to expand in the future, Lema-Hincapie said.

"If we do the scientific document side (performed by Bautista), we could apply for a huge grant," he said. "The idea would be to include more housekeepers."

Regardless of whether the scientific document is approved, Lema-Hincapie will include a videotaped record of the project.

Lema-Hincapie is hopeful the project could spin off into a policy that ensures that as housekeepers are hired, they receive basic English and computer instruction. Ultimately, the project could improve housekeepers' self-confidence; reduce cultural/technological gaps between custodians and their younger family members; should cut down on the percentage of housekeepers' children and grandchildren who drop out of high school; and expose university undergraduate and graduate students of Spanish to teaching situations in a controlled environment.

"What for us is very simple, is not so very simple for them," Lema-Hincapie said. "Metaphorically, we breathe and they cannot breathe."

For more on the 2012-13 Diversity and Excellence Grant projects, click here.