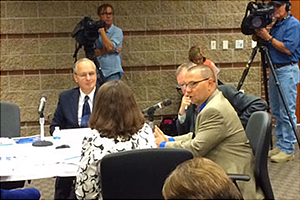 The United States is in danger of losing its biomedical edge to countries that are aggressively funding research into personalized medicine.

That was a key message from the 21st Century Cures Roundtable at National Jewish Health on Wednesday. The discussion, hosted by U.S. Rep. Diana DeGette, D-Denver, featured a panel of experts from academia, government and industry. Among those representing the Anschutz Medical Campus was Dan Theodorescu, MD, PhD, director of the University of Colorado Cancer Center, the Rocky Mountain region's only National Cancer Institute-designated comprehensive cancer center.

DeGette said Congress is taking an overdue comprehensive look at what can be done to accelerate the pace of cures in the United States. She is working with colleagues to draft legislation that will address the biomedical process—from the basic-science discovery phase to streamlining drug and device development to delivering personalized, targeted treatments to patients.

All the panelists noted that biotechnology is at a crossroads in America—"We have all the technology in place .... this is going to be a game-changer," Theodorescu said—but funding levels for research have flattened in recent years as other countries roll out initiatives to take the science to the next level.

"If we lose leadership now, we're basically not going to catch up," Theodorescu said. "This is the moment. We invented most of the technology in this country, and we need to capitalize on it."

Eric Green, M.D., Ph.D., director of the National Human Genome Research Institute, amplified Theodorescu's message, saying that the U.S. "developed the playbook" on biotechnology but is "letting other countries run with it." He noted that China currently has the largest capacity for genome sequencing, using U.S.-developed technologies, and England is launching "bigger and bolder" research efforts into personalized care.

"Other countries are investing upward," Green said. "We've been flat at best."

About a decade ago, the federal government doubled funding for National Institutes of Health research. Some 25 years ago, Congress teamed with the scientific community to launch the effort to sequence the human genome. Now, patients in the United States are benefiting from greater technology that comes at lower costs. A decade ago it cost $3 billion to sequence an individual human genome; today it costs just $1,000.

But such bold initiatives have languished in recent years.

"I hate to say it, but I think right now the U.S. biomedical research enterprise is on its heels," Green said. He said to DeGette: "When (Congress) doubled the NIH budget it was a feeling like we're going in the right direction, but I don't think there was quite the sense then of 'We know exactly what needs to be done.' The difference between now and then is truly the belief that we have this beautiful engine, just give us the fuel and we will make incredible discoveries and have clinical impact."

Theodorescu pointed out that biotechnology and biologic research also has the potential to create an economic engine for the country. He said personalized medicine, especially in regard to cancer, where patients tend to be overtreated, can actually reduce health care costs. "We would save costs if we could basically enroll them in clinical trials for therapies that potentially could really help them instead of treating them with things that are not."

The panelists said a robust health-records repository and clinical trials network need to be established where patient and study data is pooled and accessible to researchers. Speaking strongly in favor of such a registry was Frank Accurso, M.D., School of Medicine professor of Pediatrics, Physiology and Biophysics and medical director of the Children's Hospital Colorado Clinical Translational Research Center.

Janet Woodcock, M.D., director of the Food and Drug Administration's Center for Drug Evaluation and Research, said scientific discovery is not enough. She advocated for a strong "translational apparatus" that gets the research from the bench to the bedside. Lastly, she said, the scientific community needs to "take this to the community."

Judy Regensteiner, PhD, professor of medicine and director of the Center for Women's Health Research at the Anschutz Medical Campus, echoed the need to get the public excited about biomedical research. Political will is necessary to improve NIH funding, she said, and it's the public who votes in members of Congress. "It's got to come through the political system, at least in part."

DeGette, who represents Colorado's First Congressional District, said she's noticed that people respond when she talks to them about 21st century cures. "It's like what everybody here (at the roundtable) is saying. They see the potential for their families and their friends, so I think there is a way to get people excited."

Send your thoughts and suggestions for the Newsletter.
END_OF_DOCUMENT_TOKEN_TO_BE_REPLACED