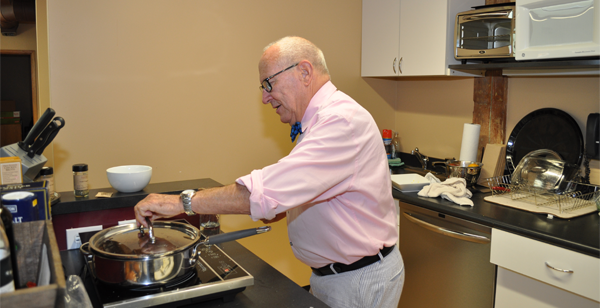 University of Colorado Maternal-Fetal Medicine Specialist John Hobbins, M.D., has helped hundreds of families realize their dreams of having a baby through his specialized medical care. He is widely recognized as an early pioneer in developing obstetrical ultrasound.

His clinic staff members look forward to his Thursday lunches, which he dishes up from his office kitchen. Each meal includes lively discussions about local ingredients such as striped bass, farmers’ market tomatoes, and artisan seasoning.

The former chief of obstetrics at University of Colorado Hospital from 1992 to 2005, Hobbins now works as an OB-GYN at the Platte River Perinatal Clinic. High-profile doctors, business leaders and basketball coaching legends have benefited from Hobbins’ specialized medical care, and they have each shown their appreciation for him through their philanthropy. Over 100 donors gave nearly $500,000 in gifts to endow a professorship for Dr. Hobbins.

“I just love what I’m doing. I’m 77 years old — when I was 40 years old, I would not have expected that I would be so engaged,” Hobbins says. “When I stop having fun, I’ll step away. This little family that I work with keeps me going. I whistle on the way to work.”

One of the world’s most successful businessmen, Ron Perelman, and his wife, Anna Chapman, donated to Dr. Hobbins’ perinatal research in gratitude for his care. With basketball coach Rick Pitino, Hobbins also co-founded the Daniel Pitino Foundation, an organization that has donated to perinatology research, in memory of Pitino’s infant son who died from a heart defect.

Patients travel from other states for appointments at Hobbins’ clinics — even calling in during snowstorms to see if any cancellations might open up last-minute appointments. Though the Platte River clinic is popular, Hobbins makes available services for a broad range of patients. Affiliated clinics offer similar services in Parker, Littleton, Boulder and Greeley.

Hobbins also has made personal financial contributions to support maternal-fetal medicine at the CU School of Medicine. His colleagues and former students were among the many donors to his endowed professorship.

“He is very bright, and he is also very unselfish in sharing his expertise,” says Greggory DeVore, M.D., who contributed more than $100,000 in Hobbins’ honor. “When he was a professor at Yale University, I was one of his first fellows that he trained. He basically launched my career with what he taught me, and I felt it was appropriate to support him.”

As a maternal-fetal medicine specialist, Hobbins also has written 15 books in his medical specialty. He is working on a cookbook featuring hot plate lunch recipes as well as a book that helps doctors explain uncomfortable medical statements to patients.

“What challenges me most is telling bad news to people, and in a situation like this, it happens once or twice a day,” Hobbins says. “For every one of these, there are 12 other patients where you are telling them good news or that things are better.”

Send your thoughts and suggestions for the Newsletter.
END_OF_DOCUMENT_TOKEN_TO_BE_REPLACED