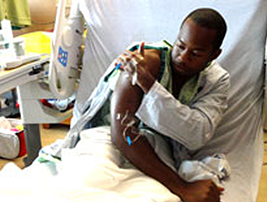 Shooting victim Michael White Jr. shows where the bullet entered his shoulder during the Aurora movie theater shooting. White was treated at University of Colorado Hospital and was visited by President Obama on July 22.

President Barack Obama visited victims of the Aurora movie theater shootings and praised the "extraordinary effort" of the University of Colorado Hospital staff who treated the wounded.

Obama spent about 90 minutes at the hospital July 22, visiting patients in their rooms, meeting victims' families and delivering a live address to the nation from the Anschutz Outpatient Pavilion.

"I come to them not so much as a president as I do a father and as a husband," Obama said. "I think the reason stories like this have such an impact on us is because we can all understand what it would be like to have somebody we love taken away from us in this fashion, what it would be like and how it would impact us."

He said the entire country is thinking about the victims and that what will be remembered will be the "good people" who were impacted by the tragedy.

Victims of the July 20 shooting were taken to six area hospitals. UCH treated the most patients, 23.

"I had the chance, fortunately, to visit some folks who are going to be OK," Obama said, "thanks to the extraordinary efforts of the staff at this hospital. I just want to thank everybody who worked tirelessly here to deal with this tragedy."

He said that, for some of the patients, their conditions were dire even 24 hours before his visit. "Now, suddenly, their eyes are open and they're alert, they're talking. It reminds you that even in the darkest days, life continues and people are strong and bounce back."

He shared the story of Allie Young, 19, who is recovering at UCH. Young was shot in the neck and her best friend Stephanie Davies applied pressure to the wound with one hand and dialed 911 on her cell phone with the other. After the gunman left the theater, Stephanie helped carry Allie across two parking lots to an ambulance.

"I don't know how many people at any age would have the presence of mind that Stephanie did or the courage that Allie showed," Obama said. "It's worth spending most of our time reflecting on young Americans like Allie and Stephanie because they represent what's best in us, and they assure us that out of the darkness a brighter day is going to come."

Obama also stopped in the rooms of shooting victims Pierce O'Farrill and Michael White Jr., both listed in good condition on Sunday. White said he was in awe of the visit by the president.

"It was just really amazing," he said. "He was talking about how we're strong and how it was great to see how many people were coming up (into the hospital) and getting together. (He said) everybody is supporting us as a nation. It's a good feeling."

White attended the movie with his dad and girlfriend Farrah Soudani, who was in the intensive care unit at UCH. Michael White Sr., an Air Force veteran, applied pressure to Farrah's abdominal wounds and laid over her until, suddenly, the gunman left the theater. Meanwhile, Michael White Jr. had been shot in the shoulder with the bullet breaking a rib before exiting out his back.

"Knowing that she's actually recovering has helped me out a lot ... it's a big weight off," Michael White Jr. said.

Michael's father was likewise touched by Obama's visit. "He was like a real person -- he just talks to you like you and him have been buddies for a long time," he said.