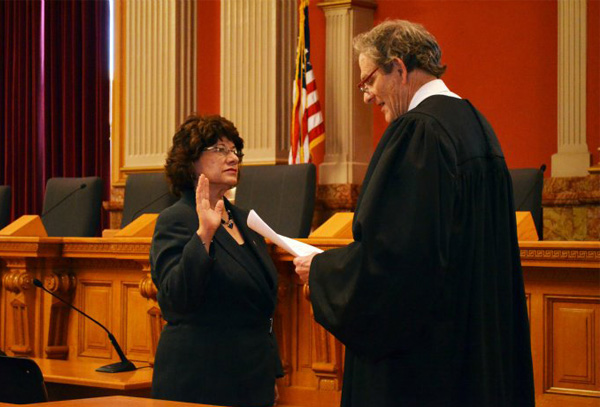 With Chief Justice Michael L. Bender administering the oath of office, Irene Griego became the newest member of the CU Board of Regents on Dec. 2. (Photo: Cathy Beuten/University of Colorado)

Irene Griego took her oath of office at the Capitol on Friday, Dec. 2, officially becoming the newest member of the University of Colorado Board of Regents.

The audience at the brief ceremony included family, friends, colleagues from her career in education and leaders at CU, including President Bruce Benson and fellow regents Steve Bosley, Michael Carrigan and Joe Neguse.

“Dr. Griego brings an amazing set of talents to the Board of Regents,” Carrigan said during his introduction. “We are tremendously lucky to have you join us.”

Chief Justice Michael L. Bender administered the oath. Griego was appointed to the board by Gov. John Hickenlooper after the resignation of Monisha Merchant, leaving a vacancy on the board for the representation of the 7th Congressional District.

A longtime administrator at the Jefferson County School District, Griego established the Office of Diversity and Inclusion in 2010, and serves as director. After taking her oath, she recalled how she and other minority students were sent out of the classroom and into the hallway for segregated reading classes.

“I was taught to read at home, but I was afraid to go in the classroom. Every night my mom made me read aloud to my brothers,” Griego said. “I finally read aloud in class. My brother was my tutor and helped me learn to write. I remember teachers who went to fight for minorities.”

Griego said she is honored to begin work with the Board of Regents.

“It’s also an honor to support the outstanding president, Bruce Benson, and his staff in doing the work they do to move the university forward.”

More photos from the swearing-in ceremony are posted at the Office of the President’s Facebook page.