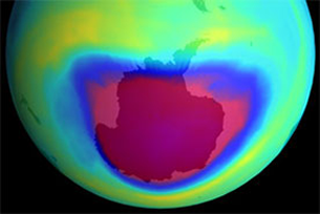 A new NASA-led study involving the University of Colorado Boulder finds that when it comes to combating global warming caused by emissions of ozone-forming chemicals, location matters.

Ozone is both a major air pollutant with known adverse health effects and a greenhouse gas that traps heat from escaping Earth’s atmosphere. Scientists and policy analysts are interested in learning how curbing the emissions of ozone-forming chemicals can improve human health and also help mitigate climate change.

Research scientists Kevin Bowman of NASA’s Jet Propulsion Laboratory in Pasadena, Calif., and Daven Henze, assistant professor of mechanical engineering at CU-Boulder, set out to quantify, down to areas the size of large metropolitan regions, how the climate-altering impacts of these chemical emissions vary around the world. The chemicals, which are produced from sources such as planes, factories and automobiles, are converted to ozone in the presence of sunlight and subsequently transported by wind around our planet. Among these chemicals are nitrogen dioxide, carbon monoxide and non-methane hydrocarbons.

By combining satellite observations of how much heat ozone absorbs in Earth’s atmosphere with a model of how chemicals are transported in the atmosphere, the researchers discovered significant regional variability — in some places by more than a factor of 10 — in how efficiently ozone trapped heat in Earth’s atmosphere, depending upon where the ozone-forming chemical emissions were located. This variability was found within individual continents and even among different regions with similar emission levels within individual countries.

“When it comes to reducing ozone levels, emission reductions in one part of the world may drive greenhouse warming more than a similar level of emission reductions elsewhere,” said Bowman, lead author of the study, published recently in the journal Geophysical Research Letters. “Where you clean up ozone precursor emissions makes a big difference. It’s all about — to use a real estate analogy — location, location, location.”

Variations in chemicals that lead to the production of ozone are driven by industry and human population. For example, the U.S. Northeast has much higher ozone precursor emission levels than, say, Wisconsin.

“We show that, for example, emissions of nitrogen dioxide in Denver are 20 percent more effective in contributing to ozone’s greenhouse gas effect than emissions of nitrogen dioxide in the San Francisco Bay area, even though both are at similar latitudes ” Bowman added. “Denver is at a much higher altitude than San Francisco and therefore can export ozone efficiently into the upper atmosphere where it is a more effective greenhouse gas.”

The researchers found that the top 15 regional contributors to global ozone greenhouse gas levels were predominantly located in China and the United States, including the regions that encompass New Orleans, Atlanta and Houston.

Bowman said the research suggests that solutions to improve air quality and combat climate change should be tailored for the regions in which they are to be executed.

“One question that’s getting a lot of interest in policy initiatives such as the United Nations’ Environment Programme Climate and Clean Air Coalition is controlling short-lived greenhouse gases like methane and ozone as part of a short-term strategy for mitigating climate change,” Bowman said. “Our study could enable policy researchers to calculate the relative health and climate benefits of air pollution control and pinpoint where emission reductions will have the greatest impacts. This wasn’t really possible to do at these scales before now. This is particularly important in developing countries like China, where severe air pollution problems are of greater concern to public officials than climate change mitigation in the short term.”

“Our study is an important step forward in this field because we’ve built a special model capable of looking at the effects of location at a very high resolution,” said Henze. “The model simulations are based upon actual observations of ozone warming effects measured by NASA’s Tropospheric Emission Spectrometer satellite instrument. This is the first time we’ve been able to separate observed heat trapping due to ozone into its natural versus human sources, and even into specific types of human sources, such as fossil fuels versus biofuels. This information can be used to mitigate climate change while improving air quality.”

For more information on the Tropospheric Emission Spectrometer visit http://tes.jpl.nasa.gov.