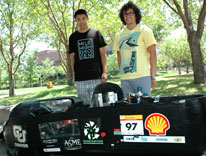 Curious students peppered the engineers with questions: "Do you race it?" "How fast does it go?" "Can I take a picture of it?"

The sixth-graders from Cole Middle School flocked around the Mile Highdrogen Car -- a senior design project by a group of University of Colorado Denver mechanical engineering students -- during their visit to CU Denver on July 6.

Laurel Dodds, director of Initiatives and Continuing and Professional Education in the College of Liberal Arts and Sciences, said Cole approached CU Denver three years ago about forming a partnership focused on the theme of sustainability. Cole is a Denver School of Science and Technology, part of a network of high-performing middle-school charters.

Similar partnerships exist with Aurora Public Schools and the Anschutz Medical Campus. Those sessions are geared toward giving students insight into the medical arts and health care careers.

On the downtown campus, Cole students met with faculty in the College of Liberal Arts and Sciences and visited various laboratories, including the biofuels lab, concrete testing lab and an aquaponics demonstration. They also visited the Business School, where they learned how to calculate carbon footprinting.

Later in the day, they toured the Auraria Library, Event Center and Tivoli Student Union, which itself is an example of sustainability, having been converted from a brewery into a student center. "We have sustainability as a focus on this campus ... This is their introduction to CU Denver," Dodds said.

The students learned that the Mile Highdrogen Car took four months to build, gets the equivalent of 500 miles per gallon and took second place for fuel efficiency at the Shell Eco-Marathon Americas Competition last spring. The project, which cost $14,000, was funded by the Auraria Sustainable Campus Program. Joe Bortles, Auraria sustainability officer, said the car project was chosen for funding after being reviewed by the program, which is a subcommittee of the Student Advisory Committee to the Auraria Board. Bortles said the fuel cell from the car may be repurposed elsewhere on the Auraria campus to inspire others to create sustainability projects.

Nguyen agreed, saying, "We'd love to see other students come up with crazy projects using the fuel cell -- see what kinds of 'save the world' ideas they have."

As for the visit by Cole Middle School students, each wearing a yellow CU Denver daypack on their backs, "We expect that this is an event that will happen every summer as we continue to partner with Cole Middle School," Dodds said. "We welcome all the colleges on the downtown campus to participate in this event."

Tagged with:
Auraria, College of Liberal Arts and Sciences