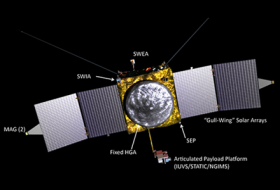 The CU-Boulder-led mission to Mars, MAVEN, just hit its scheduled milestone and is continuing toward its target, the Red Planet. The spacecraft and all of its science instruments have completed their initial checkout, and all of them are working as expected. This means that MAVEN is on track to carry out its full science mission as originally planned.

The Mars Atmosphere and Volatile Evolution (MAVEN) mission is designed to explore Mars’ upper atmosphere. It will determine the role that escape of gas from the atmosphere to space has played in changing the climate throughout the planet’s history. MAVEN was launched on Nov. 18, 2013, and will go into orbit around Mars on the evening of Sept. 21, 2014 (8 p.m. MDT).

After a five-week commissioning phase in orbit, during which it will get into its science-mapping orbit, deploy its booms, and do a final checkout of the science instruments, it will carry out a one-Earth-year mission. It will observe the structure and composition of the upper atmosphere, determine the rate of escape of gas to space today and the processes controlling it, and make measurements that will allow it to determine the total amount of gas lost to space over time.

“Successful checkout of the spacecraft and instruments is a major milestone in carrying out our mission,” said Dr. Bruce Jakosky, MAVEN principal investigator from the University of Colorado in Boulder. “While there are still a lot of things that have to happen properly before we get to Mars and can do the mission’s science, we are exactly where we need to be today.”

Upcoming events in the next month include additional instrument testing and spacecraft calibrations, first testing of the Electra communications package that will be used to relay data from the rovers currently on the surface of Mars, and the second planned Trajectory Correction Maneuver. This maneuver will adjust the spacecraft’s path by a very small amount so that it will be positioned properly for the rocket-motor burn that will put it into orbit when it arrives at Mars.

“The performance of the spacecraft and instruments to date bears out all the hard work the team put into testing the system while it was on the ground,” said David Mitchell, MAVEN project manager at NASA’s Goddard Space Flight Center, Greenbelt, Md. “The way that the operations team has performed while flying the system has been nothing short of outstanding. We have big events ahead of us before we can claim success but I am very pleased with how things have gone thus far.”