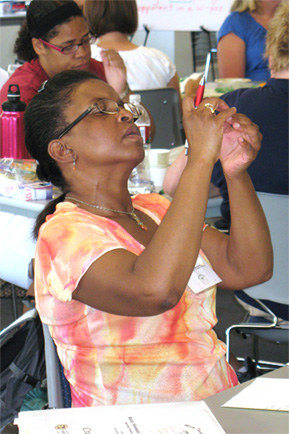 It’s mid-summer and two dozen Colorado middle-school teachers have returned to a college classroom in the CU Denver Building, sitting where the students usually do. They’ve come from the mountains, the eastern plains and the Front Range to be immersed in math.

Josh Hagin, a math teacher at Altona Middle School in Longmont, is leading one of the week’s sessions, asking his peers to consider the holes covering the plastic, marble-sized orbs in their hands. The holes are cut in various geometric shapes to accommodate corresponding pegs. When connected, the objects look like brightly colored toys; participants look like they’re at play.

But the problem Hagin poses requires considerable thought – how to count and sort the types of holes? What application of math can succeed where the eye fails? From their tables, the teachers take turns venturing to white boards at the front of the room, jotting down potential solutions.

“A lot of teachers have only experienced math as procedural, and never experienced it as problem solving,” says Diana White, an assistant professor in the Department of Mathematical and Statistical Sciences at the University of Colorado Denver. “They’re more likely to teach it well if they’ve experienced it as learners, too.”

“As teachers, it’s really hard to find the time to do mathematics and hone your own problem-solving skills – self-development gets squeezed out by other demands,” says Carmen Rubino, a teacher at Longmont’s Silver Creek High School. She helped organize the recent Denver workshop. “An event like this is refreshing and re-energizes you to go back into the classroom. Our large hope is to build a community of teachers who can continue to talk about what’s going on in their classrooms with problem solving.”

Linda Goertz, another Altona teacher, says she had to talk herself into spending a week focusing on her own learning and development.

“I realized that the more I can do for myself, the more it translates into help for my kids,” she says. “It takes energy to convince them that they can be problem solvers, but it’s been very rewarding. I call it discovery math – it’s a paradigm change.” 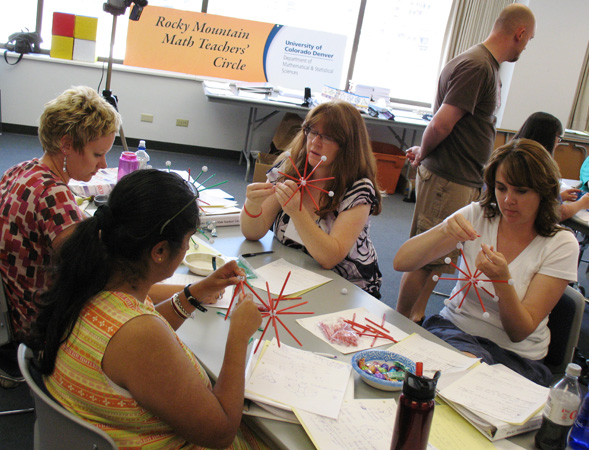 Circle organizers present events throughout the year, but the summer workshops are the most intense. At UCCS, Mathematics Professor Gene Abrams recently wrapped up his circle’s third annual summer session at Breckenridge, requiring the 19 participants to get away from their homes and complete 25 hours of rigorous math activity over the course of a week.

“It’s really enlightening for the teachers when they’re asked during the summer academy to really sit down and become students again,” Abrams says. “We’re asking the teachers to really do some work where the questions are open-ended.”

A STEM education grant from the Air Force Office of Scientific Research boosts the Pikes Peak circle. The idea: Better education of young students and their teachers will lead to a stronger future cadre of engineers.

“For me, it’s really rewarding because a lot of these middle-school math teachers were not math major themselves at their universities,” Abrams says. “They’ve come to teach math by a circuitous route. So it’s nice to share with them some of the bigger ideas of mathematics.”

In Boulder, lecturer Silva Chang leads the Colorado Math Circle, which has sponsored talks and problem-solving sessions for middle- and high-school students from across the state for the past five years.

“The math circle challenges students to use creativity and ingenuity to tackle different problems,” Chang says. “The main goal is to build a community where students can meet peers who share their love for mathematics.”

Sponsored by the Department of Applied Mathematics and the CU Office of Outreach, the Colorado Math Circle offers summer workshops, too. Some are quite targeted in their audience aim: At Sophie Math workshops, middle-school girls learn through puzzles, games and problem-solving activities. High school students are served with Zeta Math programming.

“We’re trying to get both teachers and students to understand that math is really more than doing a set of problems from some book,” Abrams says. “We want to give teachers a sense of what mathematicians do. It’s not just, ‘Well, we’re trying to build a better algorithm.’ There’s a theoretical side of mathematics. Some problems have lots of different answers. And there are some problems out there that have not been solved yet.”