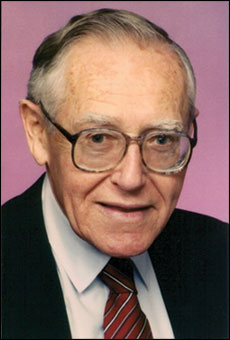 Klaus Timmerhaus, a CU-Boulder professor for 42 years who died in February at age 86, believed the University of Colorado's teaching prowess should be recognized throughout Colorado, and that students always came first.

His recent bequest to CU reflects these beliefs. Timmerhaus has left a majority portion of his estate gift to support a Timmerhaus Teaching Ambassador Award under the auspices the university's President's Teaching Scholars Program. The award will honor strong teaching and showcase the high caliber of faculty on CU's four campuses; the honoree will travel around the state to speak to groups about the university's strengths and attributes.

Another portion of his estate will support scholarships for College of Engineering and Applied Science students at CU-Boulder, adding to the Klaus and Jean Timmerhaus Fund he had established in 1992.

Together these gifts, which will be distributed in the coming months once the estate is settled, will expand the legacy and impact of one of CU's most respected and celebrated faculty members.

"Klaus Timmerhaus exemplified the ideal of a scholar – a person who was passionate about his students, his field of study and his university," said CU President Bruce Benson. "His generous contributions will benefit all three of these, and are a fitting legacy for a man who has been such an important part of the life of our university."

Timmerhaus joined the CU chemical engineering faculty in 1953 and filled many leadership roles including chair of his department and associate dean of engineering. He was a prominent national figure in the cryogenics field, was one of just 15 CU-Boulder faculty elected to the National Academy of Engineering, and was named one of the top 100 Chemical Engineers of the Modern Era by the American Institute of Chemical Engineers. He was the first recipient of CU-Boulder's largest faculty cash award, the Hazel Barnes Prize.

But Timmerhaus's impact at CU went beyond his impressive credentials. "Dr. T.," as his students called him, was known as a hard-nosed, old-school professor who took the care and extra time to ensure all of his students "got it." He didn't buy a technical calculator until 1985 because he did everything on a slide rule, says his daughter, Carol Getty; he would say, "The calculator is only as good as what you plug into it."

Getty recalls, "I've had more students and graduate students get in touch with me after his death, writing me letters about the type of person he was. He stayed in touch after graduation, took a real interest in their careers. Every award he ever received, he returned right back to his scholarship fund. He was hopeful that most professors would do the same thing."

When Timmerhaus became the first recipient of the Hazel Barnes Award, a prestigious teaching honor at CU-Boulder, he arrived at the ceremony late because he had been meeting with a student. Because of his passion for connecting with students, he was designated a President's Teaching Scholar in that program's inaugural 1989 class. Timmerhaus reached out to improve education through his involvement in the program, and enlarge its possibilities throughout CU.

The Timmerhaus Teaching Ambassador Award established with this gift will be a two-year appointment for a select faculty member. The honoree's duties will include preparation and presentation of a colloquium on effective teaching methods at each of CU's four campuses, and speaking engagements about CU in diverse settings in each quadrant of Colorado.

Timmerhaus's impact on his students was so significant that an early chemical engineering student of his established another scholarship in Timmerhaus's honor in 2002. "He was quite an individual. He kicked me in the butt, made me work hard, and therefore I succeeded," says James Fisher '57, who later wrote computer simulation models for energy industry firms. "He wouldn't let us fail."

This gift is among more than 200,000 received by the University of Colorado since the 2006 outset of Creating Futures, an unprecedented $1.5 billion fundraising campaign to support teaching, research, outreach and health programs on CU's four campuses.