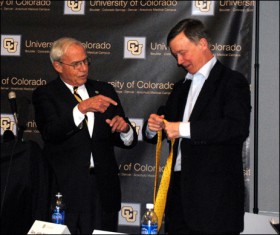 The announcement of the University of Colorado's $1.5 billion fundraising campaign began with a gift from CU President Bruce D. Benson ... to Gov. John Hickenlooper.

The donation? A bold, gold necktie.

Not only did Hickenlooper promptly don the tie, but he told those gathered at Monday's news conference at 1800 Grant St. that he considers himself a partner in the most ambitious comprehensive fundraising campaign in CU history.

"CU is one of the most powerful symbols for the state of Colorado that we have," Hickenlooper said. He stressed the value of the university's contributions to the state economy – and the continued need for a reversal of cuts to state funding for higher education. Benson noted that funding from the state is what the university relies on for operating costs.

Named Creating Futures, the campaign began with a quiet, pre-launch phase in July 2006. Since then, more than $900 million has been contributed.

Benson and his wife, Marcy, are chairs of the campaign. They also chaired the successful Beyond Boundaries campaign, which raised $1 billion from 1997-2003.

On each campus, the Bensons will be supported by volunteer campaign chairs:

The primary focus of Creating Futures will be:

"CU is an outstanding university and we intend to build on its greatness with the support of alumni, friends and organizations that will help us add value to our academic and research endeavors," Benson said. "This campaign will enable CU to continue to provide students with access to a world-class education and allow the university to augment its role as an economic driver and jobs creator that advances the economy, health and culture of Colorado and beyond."

Benson stressed that while private contributions to the university will augment its activities, they will not make up for steep declines in state funding (which pay for university operations such as compensation, utilities and technology, among others) because more than 98 percent of contributions are earmarked by donors. Restricted gifts cannot support the daily operations of the university.

"We cannot divert restricted gifts to operations, but contributions can add value to our academic and research activities," Benson said.

In Creating Futures, CU will focus on generating private support for what it calls its four pillars of excellence and impact, which encompass all the university's activities: learning and teaching, discovery and innovation, community and culture, and health and wellness. Priorities have been determined through strategic planning directed by university and campus leadership. Many projects are cooperative efforts among several CU campuses.

While there is no universally recognized standard by which universities count private campaign support, CU reviewed standards at peer universities and assessed best practices to establish standards that fairly gauge the progress of Creating Futures. Funds counted toward the goal include private support and pledges made directly to the CU Foundation, as well as directly to the university. Campaign totals include private support received through CU's Office of Contracts and Grants, consistent with counting protocols for other university campaigns, though historically these totals have not been included in CU's annual fundraising totals.

Many planned gifts are not realized until a future point in time (such as bequests, which are realized after a donor's death). While such commitments are tracked by the CU Foundation to help gauge future revenue streams, revocable planned estate gifts such as bequest intentions and IRA beneficiary designations are not counted toward the Creating Futurescampaign total.

Send your thoughts and suggestions for the Newsletter.
END_OF_DOCUMENT_TOKEN_TO_BE_REPLACED