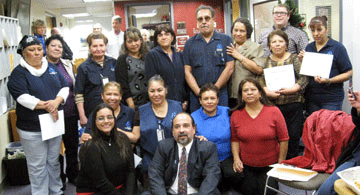 Graduates of "Introduction to Computer Basics" pose with their certificates and program founder (sitting in front with tie) Andres Lema-Hincapie.

Tears gathered in the corners of Fabiana Martinez's eyes when she expressed her gratitude for Maricela Reyes, the student who showed her how to operate a computer.

"I'm an older person and I thought I was never going to learn," Martinez said. "I was scared of computers, but now computers are afraid of me."

If education is about lighting candles, Andres Lema-Hincapie, Ph.D., sparked a bonfire of sorts when he invited Auraria Campus housekeepers to sit and learn about computers, English and take in a classic movie or two.

Lema-Hincapie watched 22 of his adult pupils -- all members of the custodial staff in the Plaza Building where he teaches in the Department of Modern Languages -- graduate from a 16-week class "Introduction to Computer Basics." A festive ceremony, complete with graduation certificates, took place Dec. 11 in the Modern Languages offices.

"It's paradoxical that, being at a higher-education institution, we had people working and not having the basic tools regarding technology," Lema-Hincapie said. The native Colombian is doing his best to end that paradox.

"They are now connecting through Facebook with their families and friends," Lema-Hincapie said. "Their lives are changing."

Last year, he won a CU System Diversity and Excellence Grant for the project to provide education to the housekeepers, many of whom struggle with English. Lema-Hincapie calls the university a "knowledge adventure," and he wanted to open the adventure to those who, somewhat invisibly, toil in the halls of higher education.

Three students in Modern Languages volunteered as tutors -- Reyes, a senior undergraduate, and Ashley Haines and Steve King, both graduate students in Spanish. Olga Gavara served as the program coordinator.

"Having no formal training as teachers, we didn't know what to expect," Haines said. "It was a great experience developing a curriculum and teaching them. They were all really eager to learn, which was very helpful to us."

Reyes said the learning was reciprocal. "We taught them and they taught us," she said. "We've been able to bring out skills that we probably didn't know we had -- like leadership skills that came out and were strengthened."

All of the student tutors said they'd love to participate in the program again. And the students' love of learning has just begun. "It was wonderful," said Angelica Reaves, a housekeeper. "Thank you so much to my tutors. This is a start."

Lema-Hincapie said 60 of the the 80 Auraria Campus housekeepers would benefit from this tutorial program. Regardless of whether he receives more funding -- he has applied for another Diversity and Excellence Grant -- the professor plans to continue offering basic computer courses to the housekeepers.

Martinez wants to continue learning, and she can't wait to turn on her own computer. "This really opens a lot of windows for us -- a lot of opportunities," she said. "We're not scared now. We can do what other people do."