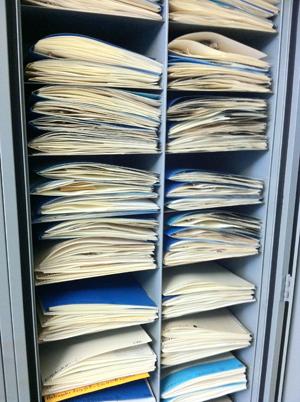 Photo courtesy Dina Clark
Herbarium COLO is digitizing all of its collections, a project that will take several years.

Stacked in metal cabinets in the basement of the Clare Small Building on the CU-Boulder campus are color-coded folders that contain a treasure trove of botanical specimens and the stories they tell about Colorado and parts yonder. The 550,000 flowering plants, mosses and lichens housed in Herbarium COLO, a division of CU’s Natural History Museum, not only link the past to the present, but also document how changing climate has affected this place we call home, and illustrate the remarkable biodiversity of the area and our connections to the rest of the world.

“Essentially, what we know about life on a little-known planet called Earth is housed in natural history collections and herbaria,” said Tim Hogan, collection manager. “Each specimen is a voucher for a particular species at a particular place at a particular time.”

The herbarium, opened in 1902, is a library of information and a storehouse of DNA that can be used, for instance, to positively identify other botanical specimens. Hogan likes to say that while the specimens are not living, they are not quite dead, either. The total collection, says curator Erin Tripp, is widely regarded as one of the most important among natural history museums in western North America.

The herbarium is open to scholars and the curious alike.

“You can’t help but learn about plants while you are here,” said Dina Clark, collection manager. “You basically can stay in one spot and get a sense of the wealth of species diversity that exists, not just in the state but everywhere. All you have to do is open up a folder and you are transported.”

Some people might think preserving flora by pressing them is old-fashioned science, said Hogan, but the specimens only increase in value over time, especially in cases where plant habitat has been replaced by concrete and asphalt.

While collecting samples of plant life might seem an easy endeavor, it is not. It takes a wealth of knowledge, a keen eye and plenty of grit to brave everything from biting bugs to nasty weather to long days in the field searching for a plant that may or may not be there. And that is only half the work involved.

“People don’t appreciate how difficult it is to get (specimens) into a collection,” Hogan said. “It’s a lot of steps from the time you dig up the plant, put it in a field press, get it back to the truck, put it into a wooden press, dry it and then, in the winter, identify it, generate a label, process it into the database, glue it onto a sheet … from the time I take that plant to when it makes it into the cabinets, I have worked with the specimen at least a dozen times.”

Hogan came to Colorado because of his love of mountain climbing, so it’s no coincidence that he specializes in collecting specimens from hard-to-reach mountain areas, including the San Juan and Sangre de Cristo mountains. He’s the perfect complement to Clark, who spends most of her research time on the High Plains, especially in the canyon lands of the Purgatory River.

While some of the specimens at the herbarium are recent additions, others were collected by early botanists, including Charles Christopher Parry, who in the late 1800s discovered new species, including the Torrey Pine and Engelmann Spruce, and named several area mountain peaks after his botanist mentors — John Torrey, Asa Gray and George Engelmann.

All of the specimens, including  those borrowed from other institutions,  are made up of the plant  and the all-important label that states the name of the plant (or moss or lichen), the location of the site from which it was collected, details about the surrounding habitat, the date  it was collected, and other pertinent information about the find. Together, the plant and the label serve as a voucher specimen.

Without a voucher, said Hogan, a plant record is just hearsay because the scientific value hinges on the objective evidence represented by the labeled specimen.

“The collection here is a reference collection,” Hogan said. “In a folder of 20 specimens of the same species, you can see all the variation that a book doesn’t show. A book has an idealized or generalized description of a plant and how it looks, but being able to see how that variation changes over geographic spectrums is important.”

For more information about the herbarium, visit https://cumuseum.colorado.edu/research/botany

Tagged with:
University of Colorado Museum of Natural History