A school memories book from the first grade provides more than a hint of Sarah James’ future. Along with the photos and report cards are her declarations that she wants to be an archaeologist.

“I’ve always been a practical person and archaeology is a hands-on way to approach the past,” said James, assistant professor in the Classics Department at the University of Colorado Boulder. “Then combine that with interesting questions about antiquity that begin to be answered through excavation and all the wonderful things we find through that process. It just became a matter of where I wanted to work.” 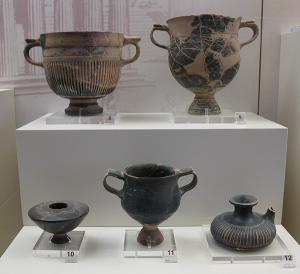 A trip to Greece when she was 15 cemented her choice. She researches the society, economy and material culture of the Hellenistic period in Greece, which encompasses the fourth through first centuries B.C. She wanted to study ceramics, she said, because as an archaeologist in the Mediterranean, probably 95 percent of what you excavate are pieces of broken pottery.

The Hellenistic period held a particular appeal. “I wanted to study periods where pottery mattered, periods where you don’t have a lot of literary sources or other kinds of historical documents. The Hellenistic period is an interesting time: Basically, it starts with the death of Alexander and ends with the death of Cleopatra; it is a time of kings and wars and dramatic change before Classical Greece transitioned into the Roman Empire. Ceramics are important for understanding it because many of the written records for this era are lost and we must rely on archaeological evidence, including pottery, to reconstruct it.”

James has directorial responsibility in three current projects in the Mediterranean and spends all of her summers there. Her numerous publications include research articles, field studies and book chapters. Her most recent book is “Corinth VII.7: Hellenistic Fine Wares” (2018), and she is working on another on the imported pottery from Hellenistic Corinth. 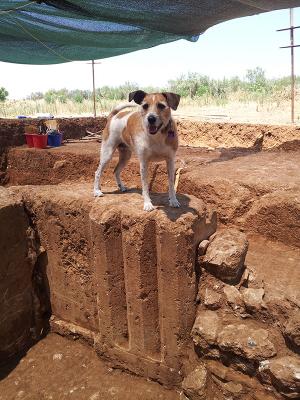 Her dog, Holly, was born in Greece and has spent nine summers in the field with James and the CU students who assist her with her projects. Age kept Holly in the United States for the first time this year, but James said, “She was incredibly popular and boosted everyone’s morale.”

James also is president of the local chapter of the Archaeological Institute of America and organizes a monthly series of lectures by CU professors and scholars from around the country at the CU Museum of Natural History. The events are free and open to the public; for more information on upcoming presentations, visit https://www.colorado.edu/cumuseum/programs/adults/aia-lecture-series or www.facebook.com/AIABoulder.

1. What are the three archaeological projects you are involved with and what are your goals?

My newest project – the Dalmatian Archaeological Regional Project – is set to start next summer in southern Croatia. I’ll be partnering with colleagues at the University of Split, which is close to the site on an island called Brać. I’m really pleased about this new direction. I’ve worked in Greece for nearly 20 years and Croatia is really a new frontier in Classical archaeology. We are going to be only the second large-scale American project to work in Croatia. Our main site is a hill fort that was occupied during the pivotal periods when first the Greeks and then the Romans entered that part of the Adriatic.

I’m also co-director of the Western Argolid Regional Project, which has spent the last six summers studying 30 kilometers of territory in the mountain valleys northwest of Argos. We grid out the landscape and walk it, picking up pottery because there’s been so much occupation in Greece for so many millennia that you literally can’t walk through a field without finding artifacts on the surface. Even if it’s not where it was originally dropped by some ancient person, the very fact that it is there tells us about what was happening in the region. Excavating, however, remains to be determined.

Excavation is so expensive that we can’t risk it until we do a little more research. The next step for us is to do ground-penetrating radar or magnetometry to try to see below the surface and determine potential areas for future work.

2. Are people so used to having artifacts on the surface that they don’t loot? What happens to everything that you find?

Looting is definitely a problem, especially when it comes to tombs. When you work in Greece, everything belongs to the Greek government and they strictly control your activities, and so we are always observed when we are working. But, honestly and understandably, people don’t care very much about broken pieces of ancient pottery. One of our guards, who was also a farmer, would laugh at us when we would bring in bags of broken potsherds to our lab, saying, “Come to my field; I have lots of that stuff lying around if you want it.”

3. What have you learned while working at the Sikyon project?

My third project, the Sikyon Archaeological Project, is where I’ve been assistant director since 2012. We have conducted six seasons of excavations in the heart of the ancient city and I am currently studying the pottery and working with the team to prepare the final publication.

Sikyon is amazing because we know from ancient historical sources that it’s an important city, but we knew almost nothing about its archaeology and architecture or what the living city was like in the past until we started excavating. We knew we would find something really exciting and the campaigns have really proven that.

One of the small projects I was doing this summer was trying to figure out the date of one of our most important architectural finds – a small temple near the theater. Most probably was built in the fourth or third centuries B.C. and it may have been dedicated to Heracles, a major deity in the city.

This city is important for a couple of reasons, but the most relevant is that it becomes the head of a political league, the Achaean League, in the third century B.C., that becomes an enemy of Rome. It is this conflict between Sikyon and its allies that is the justification for Rome’s conquest of Greece in 146 B.C. The next period is one of transition between Greek and Roman culture and is a fascinating time that forms a major part of my current research.

4. What are the stories that pottery tells?

Early excavations in Greece really focused on famous cities and their monuments, but this is only a small part of the story. It is the elements of daily life, including pottery, found in houses, marketplaces and tombs that tell you about the details and complexities in ancient Greece in a way that a single standing building usually can’t tell you.

A good example of the power of pottery is what I did this summer. I spent about a month looking at debris that had been thrown down a well in the first century B.C. in Sikyon. Even at this moderately sized city, in addition to lots of locally made ceramics for cooking, eating, and storing food, there were large quantities of imported pottery from packing containers – for olive oil and wine being transported long distances by sea – and especially fine tablewares like drinking cups and plates from sites in Spain, Tunisia, Italy, Egypt, Cyprus, Turkey. These broken potsherds by virtue of their presence in this well tells us a lot about the Mediterranean-wide trade routes that ancient Sikyonians were engaging with and give a sense of the economic prosperity of the city in this era.

On a more local level, Greek potters made wares for their own communities – most of the basic shapes you have in your own kitchen. When you study pottery, you can see when changes happen in that set of equipment. For example, it’s only starting in the third century B.C. that Greek potters start to make lots of plates at Sikyon. This is telling you something about dining habits. At the same time, suddenly in the third century B.C., they start to make cooking wares like frying pans that are intended to make flat food that would go onto plates. The timing of this, in my opinion, is not coincidental. It is likely that this culinary shift is evidence for a growing middle class, after the conquest of Alexander the Great, that desires a more complicated type of cuisine. This change in ceramic production shows the development of early European haute cuisine: people start caring about food and eating food for pleasure and not just for sustenance. It’s also at about this time that we get the first cookbooks.

5. During your years of study, what have you found that surprised you?

During my many seasons of excavating at Corinth, we were digging inside a Roman house down to the floor level. When we got to the point where we wanted to see if there was an earlier phase of the building, we popped up the threshold block for the front door and underneath it was a pit. The pit was full of broken glass and lying on top, placed face down, was a marble head from a statue of the emperor Commodus. Someone had intentionally dug this hole, put broken glass in and an image of the emperor’s face down in it, knowing that every time they went into the house, they would symbolically hurt him.